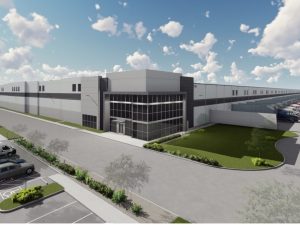 Champion Partners and Cresset Partners have broken ground on a 1.4 million-square-foot industrial project in Wilmer, Texas, one of the state’s largest single-building speculative developments.

The developers have appointed Stream Realty Partners to be in charge of leasing. Tradepoint 45 is expected to be delivered in the third quarter of 2023.

The Tradepoint 45 West building will be situated on a 95-acre property at 1200 N. Sunrise Road, near Interstate 45, providing access to the largest Texas metros, including Dallas-Fort Worth, San Antonio, Austin, and Houston, which is home to 66 percent of the state’s population. The project will feature 40-foot clear height, 354 truck trailer parking spots, 237 dock doors and 306 parking spots available for employees.

Developed at the tip of the Texas Triangle and 15 miles from downtown Dallas, the new building will fill a critical need for industrial space coming from large users seeking to locate in South Dallas to quickly access the Greater Texas marketplace, according to prepared remarks by Cresset Partners’ Director of Investments Dominic DeRose.

The project is located between Lancaster Airport and within 3 miles of the Union Pacific Dallas Intermodal terminal, within the International Inland Port of Dallas, one of the biggest logistics transportation and intermodal logistics hubs in the U.S., accessible through Interstates 20, 35, 45 and Loop 9, which is under construction.

Located along Interstates 45 and 20, the City of Wilmer enjoyed significant industrial growth in recent years and became one of the fastest-growing cities in southern Dallas, according to Sheila Petta, Mayor of the City of Wilmer.

Upon completion, Tradepoint 45 West will be the largest industrial development in the area. Many big companies have distribution points in Wilmer, including FedEx, Amazon, Yokohama, Nike, Procter & Gamble and Medline Industries, among others.

Stream Realty Partners’ team led by Managing Director Matt Dornak, Senior Vice President Luke Davis and Senior Associate Ridley Culp will be in charge of the development’s leasing efforts. Earlier this year, Urban Logistics Realty completed its three-building industrial campus in Euless, Texas. Omni Logistics will fully occupy the new Class A business park. Another large development plan that has recently been approved in the area calls for the construction of 3.2 million square feet of industrial and logistics space. The developers are 42 Real Estate and SLJ Co.