Three cities stood out in the firm’s annual study, which takes a close look at trends in major industries. 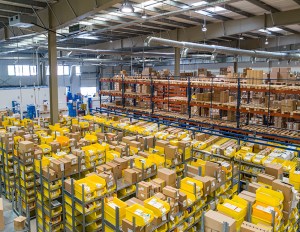 Photo by Adrian Sulyok on Unsplash

JLL’s brand-new 10th annual U.S. Industrial Demand Study cuts past the usual transaction statistics to focus on which sectors are propelling the nation’s stunning 30 percent year-over-year increase in industrial space demand, which properties are most in demand and why Phoenix, Savannah, Ga., and Charlotte, N.C., are the current stars of the market.

Although e-commerce demand has abated somewhat nationwide, it continues to drive the Logistics and Parcel Delivery industry’s space needs, which represent more than 194 million square feet in requirements.

Just since 2021, the automotive industry has increased its needs by more than 156 percent, driven in part by the growth of electric vehicle manufacturers and battery makers.

Demand for Construction, Machinery & Materials companies grew by more than 41 percent in 2022, primarily caused by increased commercial and residential development.

The hot Logistics and Parcel Delivery sector was the most active industry occupying industrial space in eight of the 10 U.S. regions. Demand is growing most rapidly for properties in the mid-sized range (250,000 to 499,999 square feet), which is especially popular with food and beverage companies.

A tale of three cities

Phoenix tops that short top three list, based on its location, population growth, construction pipeline and industrial demand, along with relative proximity to the Los Angeles and Long Beach, Calif., ports. Industrial demand there rocketed up by 56.6 percent from 2021 to 2022.

Congestion at other major ports has powered a 29.5 percent jump in demand at the Port of Savannah, in response to which the Georgia Port Authority has announced an increase in storage space there.

Substantial and steady population growth has brought Charlotte to the 15th position among U.S. MSAs, concurrent with strong expansion of its manufacturing base, which benefits from proximity to the Port of Charleston and the Inland Port in Greer, S.C. Like Savannah, the latter two ports are undergoing infrastructure expansions. From 2021 to 2022, Charlotte saw a 31.4 percent increase in industrial demand.

According to JLL, the practice of reshoring is more important as supply chain woes continue to create backlogs at ports. “Tight availability, high rents and port congestion along the West Coast have pushed many occupiers to the Southeast,” the report notes. Consequently, the region led the nation for industrial demand in 2022, with 240 million square feet in requirements.

IRR’s recent Viewpoint 2023 emphasized the same point, based on data from Newmark.