Will CRE Construction Hold Steady in 2023?

This consensus index points to an uptick in the near term. 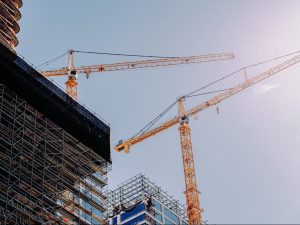 Despite current headwinds, nonresidential construction spending is expected to increase at a moderate rate this year, mostly due to healthy architect and contractor backlogs, according to a new forecast from the American Institute of Architects.

Overall gains are projected to be just under 6 percent, with almost 3 percent for the commercial sector, 15.1 percent for industrial facilities and 3 percent for retail and other commercial properties, which includes commercial/retail, distribution, transportation and communication. This year’s projection for office construction spending is down 0.5 percent.

However, the outlook for 2024 is less optimistic, with slowing spending expected across the board except for education construction.

The AIA’s Consensus Construction Forecast panel, comprising leading economic forecasters, is projecting nonresidential construction to slow to under 1 percent in 2024. Spending on commercial buildings next year is forecast to drop 1.4 percent, with office construction spending declining further in 2024, with a 0.7 percent decrease. The retail and other commercial category is projected to see declines of nearly 3 percent and even industrial construction spending is expected to drop leading to only a 0.4 percent increase by next year. 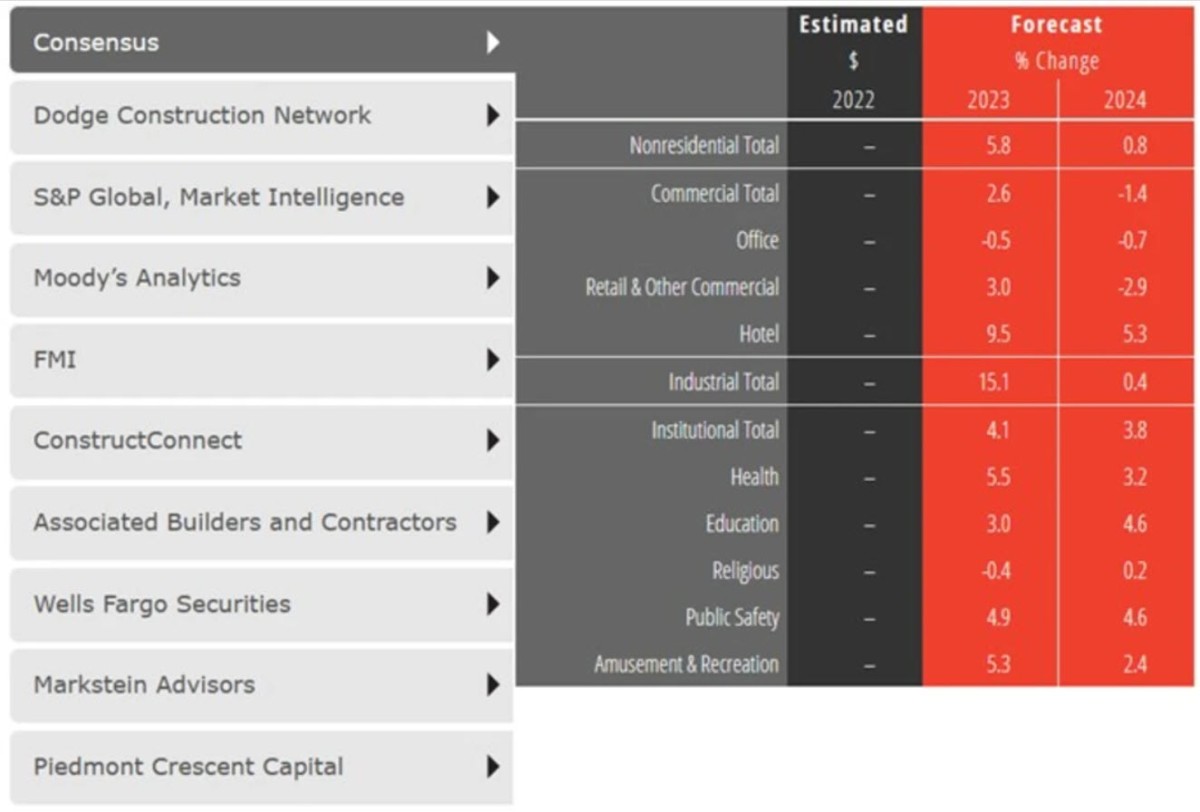 Breakdown of the AIA Consensus Construction Forecast panel for 2023 and 2024. Image courtesy of the American Institute of Architects

Looking at CRE development in 2022, beyond

The report notes spending on nonresidential construction did pick up momentum toward the end of 2022, with gains nearing 10 percent on an annual basis. Most of the increase was due to hikes in materials and labor costs but the AIA states the results were encouraging because of the economic challenges faced in 2022 such as inflation, rising interest rates and weak consumer sentiment scores.

Last year, the office sector was one of two sectors, including lodging, that did not see construction spending gains in 2022 as both still faced demand reductions coming out of the pandemic. The commercial/industrial sector increased by more than 15 percent as did retail and other facilities, including distribution, spurred in large part by reshoring efforts by many U.S. companies. The explosive growth in e-commerce due to the pandemic saw construction of distribution facilities increasing nine-fold over the past decade.

Projects that began last year are expected to continue to completion this year, which is part of the panel’s cautious optimism for construction spending to increase in most cases this year. The Associated Builders and Contractors reported backlogs averaging nine months in late 2022. Architecture firms are also seeing backlogs, averaging seven months. But architecture firms also note that backlogs can disappear if business conditions worsen and clients decide to delay or cancel projects that no longer make economic sense.

In fact, the AIA Architecture Billings Index is pointing to signs of a slowdown in construction spending in the third or fourth quarter of 2024. The billings index fell below the significant 50-point threshold in the fourth quarter of 2022, indicating a national decline. Lead time between design activity and construction activity runs between 9 and 12 months, which leads to the projections for slowdowns later next year.