Plans for the new development call for a total of 4.7 million square feet. 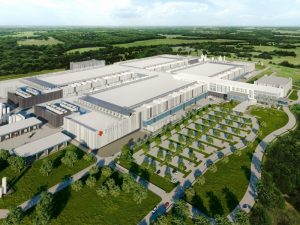 Rendering of the Sherman plant. Image courtesy of Texas Instruments

Texas Instruments announced it has broken ground on a 4.7 million-square-foot chip manufacturing plant in the North Texas city of Sherman.

The site will house four 300-millimeter semiconductor wafer fabrication plants—or fabs—where production of analog and embedded processing chips at the first facility is anticipated to begin in 2025.

Expected to create up to 3,000 jobs, the Dallas-based chip manufacturer’s potential $30 billion investment includes plans for four fabs aimed to meet semiconductor demand, which is expected to continue to rise in the coming years.

READ ALSO: Why the Chip Shortage Is a Boon for US Markets

The four structures are designed to achieve LEED Gold certification. The fabs themselves will be outfitted with equipment designed to reduce waste as well as the building’s water and energy consumption.

Texas Instruments continues to invest in its in-house manufacturing. Work is underway on another 300-millimeter wafer fabrication facility dubbed RFAB2 at 300 W. Renner Road in the Dallas suburb of Richardson. Production is expected to begin in the second half of the year.