The deals and trends that shaped the market’s commercial real estate scene in 2021.

Commercial real estate in California’s largest city had an active year in 2021, despite challenges brought on by the ongoing pandemic. The Los Angeles real estate market has benefited from booming demand for industrial space, the rising popularity of non-traditional creative office spaces and increased development of studio and production space.

These were the biggest stories of the year in Los Angeles: 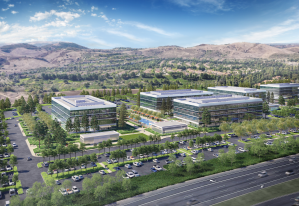 While the Los Angeles central business district has more than 9 million square feet of office space underway or in the pipeline, according to CommercialEdge data, many of the projects are redevelopments of major historical buildings into state-of-the-art office buildings. The redevelopments include KBS’ $65 million renovation of the iconic Union Bank Plaza, a 700,000-square-foot landmarked office tower in the heart of downtown. The building was put up for sale in August, and could reportedly fetch up to $250 million.

Outside of the CBD, most office projects in the works are ground-up construction. Urban areas around the city have another 3.4 million square feet of office space under construction or planned. Developers are ramping up activity in the area’s suburban markets to be closer to workers who would prefer not to commute to high-density areas like the CBD.

Orange County has been a major beneficiary of the wave of suburban construction. The county has about 1.5 million square feet of office space in the pipeline, CommercialEdge data shows. This includes the 345,000-square-foot final phase of Irvine Co.’s 1.1 million-square-foot Spectrum Terrace project in Irvine.

Many of the largest deals completed in the Greater Los Angeles area this year involved creative office space. Developers are racing to meet the growing tenant demand for nontraditional office space designed to foster creativity, flexibility and collaboration among their employees.

Invesco Real Estate and SteelWave are redeveloping the former Los Angeles Times newsroom and printing plant in Costa Mesa into a creative office campus. The Press, located at 1375 Sunflower Ave., will have 380,856 square feet of creative office space, around 52,000 square feet of retail and a one-acre park featuring open-air coffee shops and art installations.

A joint venture of Hudson Pacific Properties and Macerich is transforming the former 680,000-square-foot Westside Pavilion shopping mall in Los Angeles into a creative office space. Google has inked a lease for the entire building and will occupy the property when the redevelopment is complete in 2022. 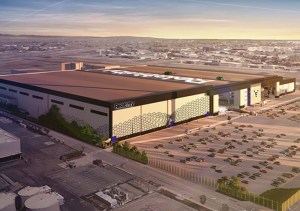 The health crisis hit the industrial market in and around Los Angeles hard in the final quarter of 2021. Labor shortages resulting from the pandemic led to major delays in the Port of Los Angeles, resulting in dozens of container ships sitting idle, unable to unload their cargo onto docks already crowded with unloaded or empty containers. After President Biden got involved in mid-October, the Port of Los Angeles joined the Port of Long Beach in launching 24/7 operations. That effort, along with other measures, have helped significantly ease the delays at the port.

Despite the supply chain issues, Los Angeles remains one of the nation’s strongest industrial markets. Industrial rents were among the highest in the country, with the city recording average industrial rents of $10.23 per square foot in November, up 6.2 percent from one year ago, according to CommercialEdge. Only the Bay Area and Orange County industrial markets posted higher rents. Los Angeles industrial vacancy rates also remain among the lowest in the country at 3.1 percent.

This summer, aerospace manufacturing company Relativity Space inked one of the largest industrial deals completed in the city. The firm leased 1 million square feet at Goodman Commerce Center in Long Beach for its new headquarters. The facility will include lab space, a machine shop, a mission control center and its proprietary metal 3D printers, which it will use to print entire rockets.

Los Angeles has seen a surge in the construction of studio space as production companies seek to join the lucrative market for streaming television shows, movies and video. Developers have launched redevelopments of older studios and are also converting office and industrial buildings into studio spaces. The city already has around 5.2 million square feet of production space, according to the Los Angeles Daily News. 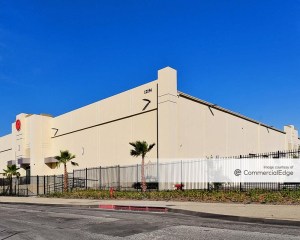 Hackman Capital Partners and Square Mile Capital struck a megadeal in late November with the $1.8 billion purchase of CBS Studio Center and associated operating businesses. Set on a 55-acre site in Studio City, the property has 1 million square feet of studios, offices and third-party tenant space.

In Burbank, Worthe Real Estate Group is redeveloping the Warner Bros. Ranch Lot. The project will entail 926,000 square feet of new space, including 16 sound stages, an office complex, production support space, a parking structure and a commissary, according to the Los Angeles Daily News.

Owner Rexford Industrial Realty is converting a portion of the industrial space in a building located at 12154 Montague Street in Pacoima into studio space for a new tenant. Quixote Studios signed a lease for 124,000 square feet at the property, which is located across the street from a new production facility the entertainment company is building. 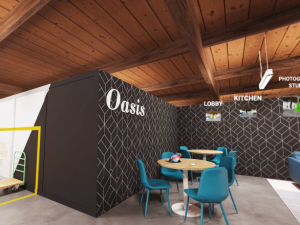 Activity is expected to increase throughout the Los Angeles office market in the coming year, given that California recently lifted most of the state’s pandemic-related restrictions. But after more than a year of working from home, many people do not want to return to traditional offices.

Los Angeles already had the second-largest flexible office market by inventory in the country—more than 6.4 million square feet—second only to Manhattan, according to CommercialEdge. Area developers are adding more offices that provide tenants with a variety of different places and ways to work.