Heightened demand for industrial space continues to drive down vacancy rates across the country. 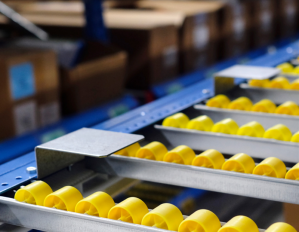 Amazon’s fast-paced industrial expansion seems to have come to an end, and the company’s recently canceled development plans and decision to sublease some 10 million square feet of space stand as a testimony to a potential shift in the industrial market. The bulk is located in Southern California, New Jersey, New York and Atlanta—markets that have some of the lowest vacancy rates in the country, the latest CommercialEdge industrial report pointed out.

However, traditional retailers such as Walmart are joining the e-commerce game amid Amazon’s slowing expansion, fueling competition and construction activity in the long term. More than 656 million square feet of industrial space was under construction as of May, representing 3.8 percent of total stock­. Projects in the planning stages accounted for an additional 4 percent.

National in-place rents averaged $6.53 per square foot in May, increasing by five cents from the previous month and up 470 basis points year-over-year. Average rents and rent growth were highest in coastal markets—predominantly in Southern California—with Los Angeles ($10.57 per square foot, 7.2 percent growth), the Inland Empire ($6.81, 6.8 percent), Central Valley ($5.39, 6.1 percent) and Orange County ($11.89, 5.8 percent) leading the way in this sense, according to the CommercialEdge industrial report.

The difference between a lease signed in the last year and average in-place rents reached $1.17, and CommercialEdge expects the spread to continue to grow in the short term thanks to a combination of factors such as ongoing demand for space and growing inflation. Contrasts were most evident in port markets, where differences were highest in Los Angeles ($3.96), the Inland Empire ($3.80) and Orange County ($3.74).

Industrial market vacancy nationwide was 4.7 percent in May, a 30-basis-point decrease from the previous month. Once again, coastal and Southern California markets had the tightest vacancies, led by the Inland Empire (0.6 percent), Los Angeles (2.1 percent) and Central Valley (2.7 percent). At the other side of the spectrum, vacancy in markets such as Boston, Houston, Twin Cities and Cincinnati hovered above the 8 percent rate.