What’s Next for Industrial Real Estate?

How long will the sector reign as an industry darling? Insights from NAIOP’s I.CON conference. 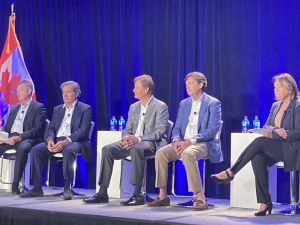 A key factor in the sector’s rise during the past two years, Bak noted, has been the transformation of retail.

“The consumer today is flush with cash; they’re spending money; they’re just doing it differently. The demand is just insatiable and leading to a hybrid of mixing bricks and mortar with e-commerce. The balancing act of supplementing retail with e-commerce is really the game changer.”

“There’s a psychological change,” Snyder said. “Buying stuff at home was the only way to get it (during the pandemic). Folks who had previously not done an order online suddenly embraced it. That was a huge ramp up in this demand cycle.”

That shift has led to what were once considered tertiary markets becoming major markets, Conklin said.

Are there threats that could end the party?

One is that as warehouses develop technologically and the logistics process relies more on electric and alternative fuels, they will need significantly more energy than ever before.

“We’re energy hogs,” Inman said. “The power (needed) to run alternative fuel vehicles will be off the charts.”

Snyder said that the amount of energy consumed in a warehouse today compared to 20 years ago is 50 times higher. “It puts pressure on the grid.”

Given that the need for warehouses is so high, the panel agreed that jurisdictions must do more to facilitate the growth and construction of new buildings, but the regulatory process is onerous. Coupled with the housing crisis—most notably in California—the net effect may be that companies leave a region for a more enticing environment in another state.

“It bugs me that we’re not able to keep business going (in California) without punishing businesses and forcing them to leave,” Snyder said.

Retaining talent not just for warehouse workers but those in the industry itself is also a concern, Bak said.

“We focus very intensely on the recruiting of talent,” he said. “Our emphasis is the recruitment process, the internships, the hiring. Diversity is very important to us. Our company focuses on recruiting, retaining and succession planning. These are all new things, and they’re at the top of the list.”

Other threats? “For me personally right now, it’s interest rates,” Conklin said. “I think there’s a sea-change taking place, and it always happens when rates start to increase. It’s not on the tenant demand side, but in capital markets.”

“It’s what you don’t know,” Merriman said. “Everything in industrial seems so perfect that you’re waiting for a left hook.”