Pioneering projects could point the way to this alternative development strategy.

As measured by size, the industrial facility at 640 Columbia St. in the Red Hook neighborhood of Brooklyn is unexceptional; it tops out at a little less than 400,000 square feet. But it has another distinction that points the way to a new strategy for last-mile distribution centers. When it opened four years ago, the property developed by DH Property Holdings and Goldman Sachs Asset Management was one of the first multistory distribution centers to be developed on the East Coast.

Supply-chain logjams, consumer demands and the need for a more resilient inventory model are all creating fresh challenges for industrial property operators and their clients. Sites abound across the country for ground-up and infill projects. But in space-constrained urban markets, finding a sufficient footprint for last-mile distribution centers is a different story.

That is demanding fresh approaches to distribution center design. As an alternative to conventional single-story facilities with a large horizontal footprint, the first wave of multistory logistics facilities is gaining traction. Though the idea is relatively new to the U.S., it’s well established in Europe and Asia.

While many markets have ample room to develop distribution and warehouse space from which companies can deliver their products on time, that is often not the case in densely developed urban areas. In many of these cities, attractively located industrial sites have already been transformed for other uses. A telling statistic: Project sponsors in San Francisco submitted 362 permit applications to convert a logistics property to another use between 2013 and 2020, according to Prologis. During that period, the city received only 57 applications for converting a property to logistics. Likewise, much of the industrial inventory in New York City has already been rezoned or repurposed, and sites that are both suitable and available are hard to find.

Development of industrial product in Seattle is also hampered by the geography of the land surrounding the city. “In Seattle, geographic features—mountains, lakes and the Puget Sound—can constrain available land for development,” said Kolpa. That influenced Prologis’ decision to develop Georgetown Crossroads, the first multistory logistics facility in the U.S., in 2018.

“These strategically located developments offer businesses the ability to save money on delivery costs as well as meet expectations for fast delivery by being closer to the end consumer,” said Kolpa. Payroll, gas and tolls account for most of the tenant’s budget for last-mile services. By contrast, rent typically accounts for just a fraction of operating expenses—5 percent to 10 percent, Aaron Malitzky, executive vice president at DH Property Holdings, estimates. That means the more deliveries made from a distribution facility, the more cost-effective the service becomes, he added.

Yet though they offer a solution, these facilities also present hurdles to their development. One is the price tag. Local conditions vary, but industry sources say that developing a multilevel distribution center typically costs 30 percent to 40 percent more than a conventional facility of comparable size. Technical issues pose another hurdle. The building’s foundation and structural system must be engineered to bear the weight of both trucks and the products they transport, and those features add to the cost.

Revenue potential is a factor in considering whether to make the investments, as well. Malitzky estimates that industrial rents need to be more than $30 per square foot for such projects to pencil out. Only a few markets around the country, such as New York City, Seattle and possibly Boston, currently command industrial rents high enough to justify the premium investment in multistory projects. Rents in other space-constrained markets, like Chicago and Philadelphia, are not quite there yet.

DH Property Holdings and Goldman Sachs Asset Management joined forces in 2018 to build 640 Columbia St. in the Red Hook neighborhood of Brooklyn. The underway project is one of the two multistory distribution centers first developed on the East Coast. Innovo Property Group and Square Mile Capital Management partnered to develop the other facility, 2505 Bruckner Blvd. in the Bronx, around the same time.

Others are in the pipeline, as well. Turnbridge Equities and Dune Real Estate Partners are developing the 1.3 million-square-foot Bronx Logistics Center in the borough’s Hunts Point submarket. Chicago may also be in line for its first multistory distribution facility. Logistics Property has filed plans for a project at 1241 W. Division St. and Elston Avenue, a site owned by Peoples Gas. A ramp will provide tenants with access to the second floor of the building, which will reportedly encompass 255,000 square feet.

In planning the 640 Columbia St. multistory distribution facility in Brooklyn’s Red Hook neighborhood, the firm analyzed what it would cost to deliver products to consumers in Williamsburg from its Red Hood facility compared to a warehouse on the other side of Hudson River in the New Jersey Meadowlands. 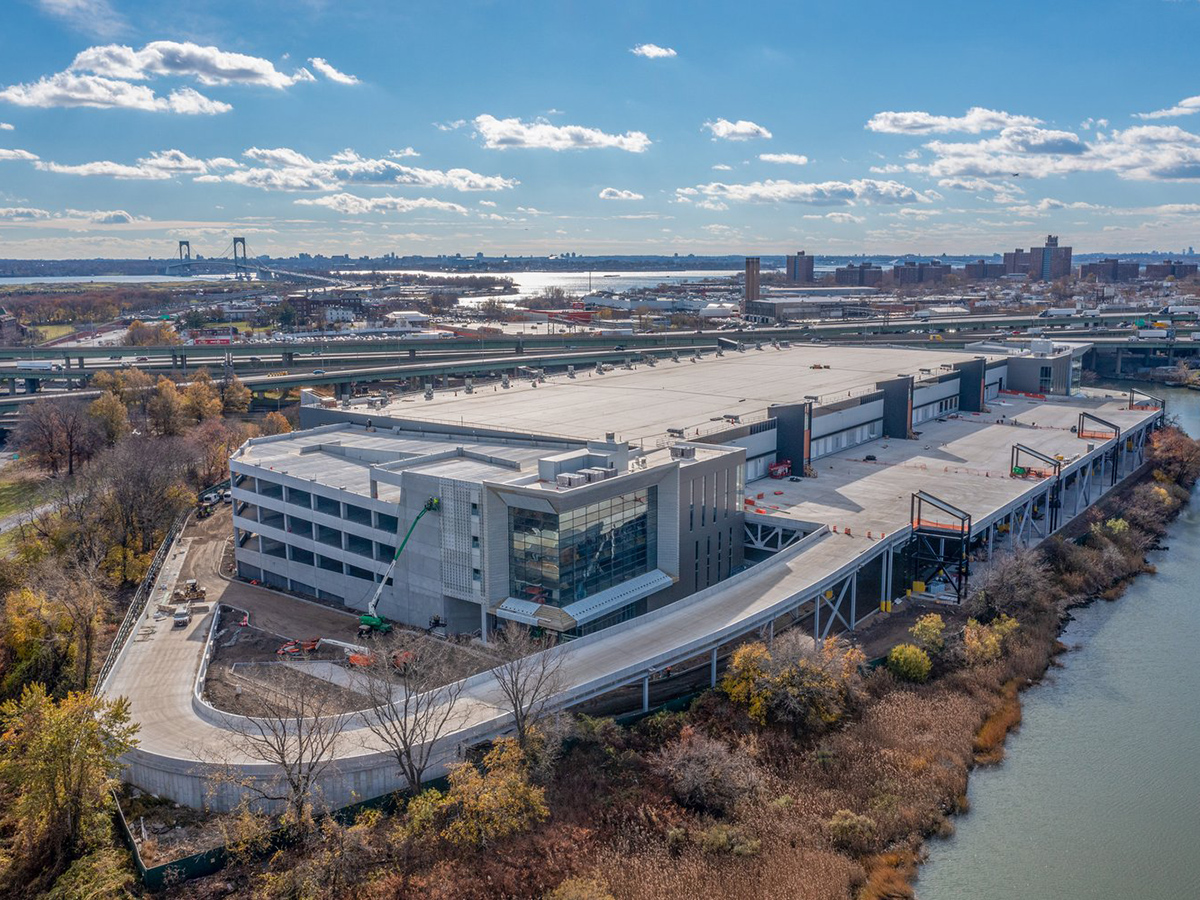 2505 Bruckner Blvd., Bronx, N.Y., is one of the few dense urban markets that can command industrial rents high enough to support the development of multilevel distribution facilities. Image courtesy of Innovo Property Group

Innovo Property Group and Square Mile Capital Management launched 2505 Bruckner Blvd. in the Bronx in January 2018. Scheduled for delivery during the second quarter this year, the project is one of the first two multistory logistics facilities to be developed on the East Coast.

The 285,500-square-foot second level offers a 28-foot clear ceiling height with 37 loading docks and two drive-in doors. It can be reached by an elevated truck court through one-way, two-lane ramps.

The distribution facility was developed on a 20-acre site situated at the confluence of the Cross Bronx Expressway, the Bruckner Expressway, the Hutchinson River Parkway, the Throggs Neck Expressway and the Bronx River Expressway. The facility provides tenants with access to more than 9 million people within a 15-mile radius of the property, allowing them quick access to people in New York City, Long Island, Westchester County, Connecticut and New Jersey.

Aurora Contractors is serving as the general contractor on the project and demolition of the existing structures on the site began in the spring of 2018. Aurora broke ground on 2505 Bruckner Blvd. in 2019 and went vertical in July 2020 when it began erecting perimeter precast concrete panels for the first floor. The project was designed by KSS Architects. 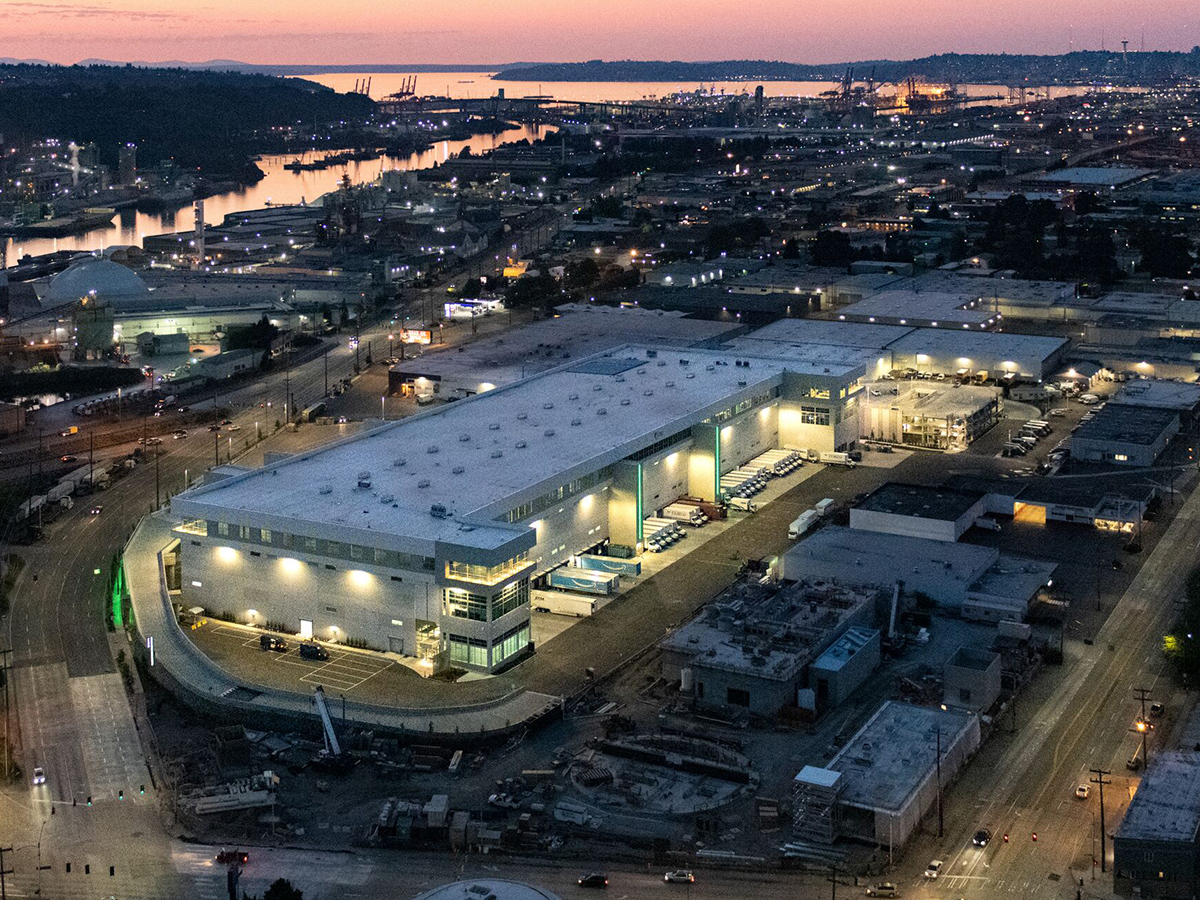 Prologis Georgetown Crossroads was the first multilevel distribution building developed in the United States. Facilities like this have existed in dense markets throughout Asia for some time. Image courtesy of Prologis

Prologis developed Prologis Georgetown Crossroads, the first multistory logistics facility in the United States, in 2018. Located at 6050 E. Marginal Way S. in downtown Seattle, the three-story warehouse is situated next to the city’s First Avenue South Bridge. Amazon leased most of the facility in 2019, taking 500,000 square feet, according to Seattle Business.

Prologis Georgetown Crossroads was constructed on 13.6 acres of land in South Seattle. The facility was designed by Craft Architects, which was later acquired by Nelson Worldwide, and Sierra Construction served as general contractor. 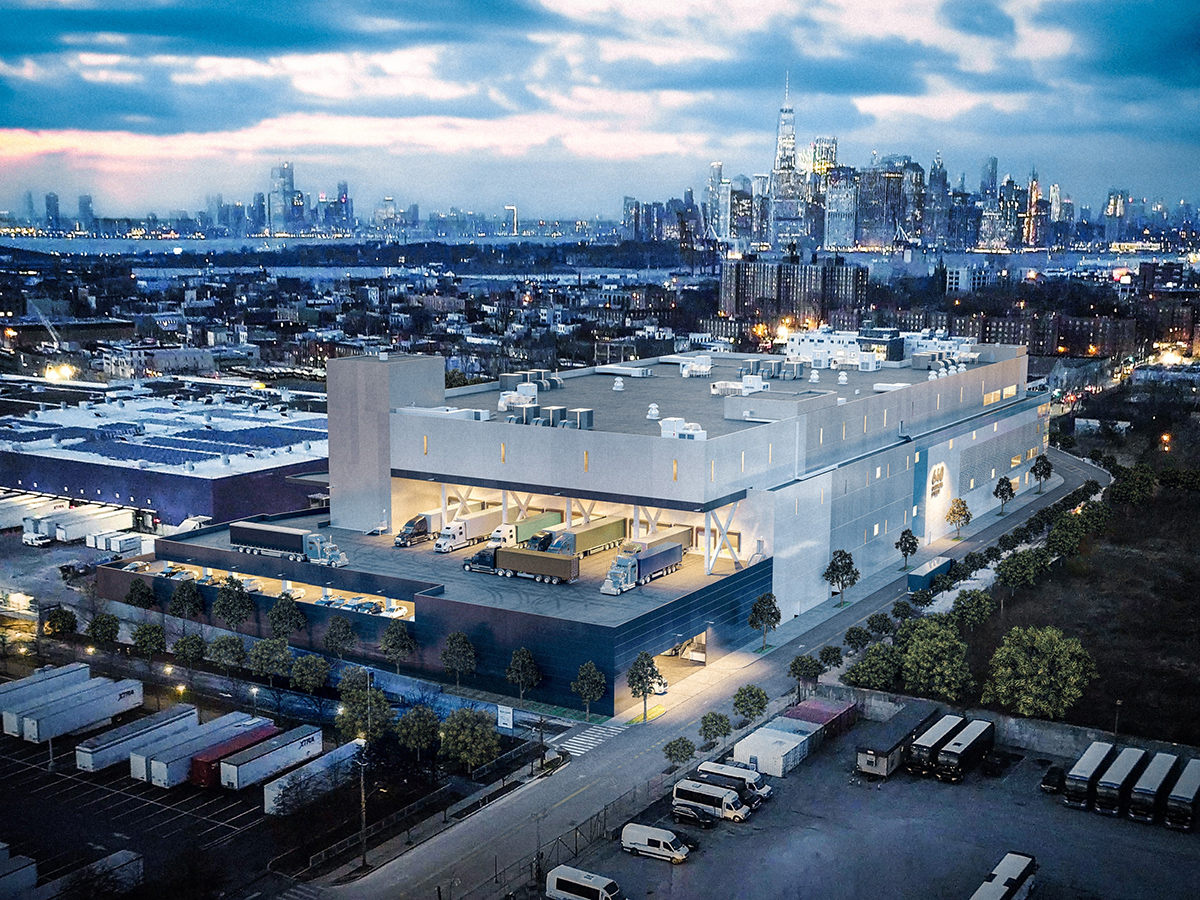 DH Property Holdings and Goldman Sachs Asset Management broke ground on 640 Columbia Street in January 2021. The three-story warehouse is in the Red Hook neighborhood of Brooklyn and is one of the first two multistory distribution centers to be developed on the East Coast.

The distribution facility is being developed on a 4.5-acre site near interstates 278 and 478, allowing users to reach all of Brooklyn, Manhattan and Queens as well as 13.5 million consumers within an hour’s drive.

The project was designed by Ware Malcomb and Suffolk Construction is serving as the construction manager.

The developers expect to complete construction on 640 Columbia in September. Amazon leased the entire facility in February 2021.