Plans call for 150,000 square feet of commercial space and a large multifamily component to replace the 50-year-old property. 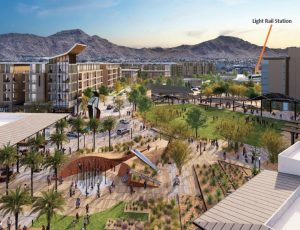 The core of the Metrocenter redevelopment. Image courtesy of Concord Wilshire Cos.

The $850 million redevelopment of the former Metrocenter Mall, a 1.4 million-square-foot historic Phoenix shopping center, into a master-planned transit-oriented community, has begun. The project, developed by Concord Wilshire Capital (CWC) and TLG Investment Partners together with CDS International Holdings and Hines, has entered its next phase, following the acquisition of the entire property located at 9617 N. Metro Parkway W. Greenwall Capital Management represented CDS in the transaction. 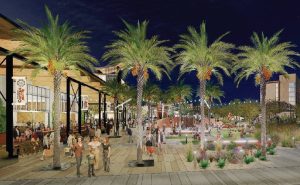 The outdoor amphitheater and retail space. Image courtesy of Concord Wilshire Cos.

Completed in 1973, Metrocenter Mall used to house a mix of big-box stores such as Macy’s, Old Navy and Bath & Body Works, as well as a cinema operated by Harkins Theatres and an indoor ice skating rink, CommercialEdge information shows. CWC acquired the property in 2021, and plans for the space’s redevelopment were first announced later that year.

In November of 2022, the Phoenix City Council approved the project in full, having previously agreed to tax breaks; in exchange, the developer agreed to bring improvements to the area’s infrastructure and pay $1.5 million for the construction of new affordable housing, as reported by Axios. 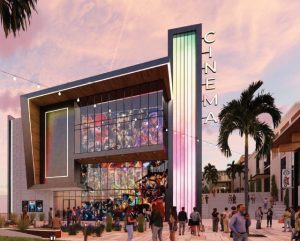 The new cinema. Image courtesy of Concord Wilshire Cos.

Taking shape on a 64.2-acre site in a Qualified Opportunity Zone, the redevelopment is set to encompass more than 2,600 multifamily units, 150,000 square feet of flexible commercial space and and 4,100 parking spaces. Local amenities will include new landscaped parks, foot and bicycle paths, an amphitheater and an outdoor retail corridor. Additionally, the community will be designed to integrate some of the mall’s existing spaces, such as a 150,000-square-foot Walmart, a local public library and park, as well as a theme park and cinema.

At the core of the project is a new $150 million light rail station, part of the second phase of Valley Metro’s Northwest Extension. After its 2024 completion, the station will provide easy access to much of metro Phoenix.

Steven Betts, managing director or development at Holualoa Cos. and a consultant on the development detailed the strength of the project’s location further to Commercial Property Executive, which exists “due to its unique parcel size and geographic location, in the center of of the Valley, adjacent to the Black Canyon Freeway just minutes to tens of thousands of new high-tech manufacturing jobs to the north, and surrounding the only elevated Light Rail Station allowing direct access for residents to commute to businesses in the central city, or to the airport and ASU. The site also has the advantage of adjacent and surrounding recreational amenities, such as Mofford Park and the Canalscape Trail System, and many existing thriving retail businesses.”

The redevelopment of Metrocenter Mall takes place as retail properties nationwide undergo significant transformation. Like the Metrocenter, these spaces often possess inherently valuable real estate and land that has struggled to capitalize over time due to a mix of macroeconomic trends and structural changes to the sector. Consequently, many retail operators and developers are reimagining and converting their spaces into mixed-use properties with multifamily components.

Recent examples include the conversion of the Brodie Oaks Shopping Center in Austin, Texas, which will see the construction of 1,700 multifamily units, 1.2 million square feet of office space, 140,000 square feet of retail and a 200-key hotel.

Another similar project, also located in Phoenix, is the redevelopment of the 100-acre Paradise Valley Mall. Its first phase is set to include a 400-unit multifamily community, together with a Whole Foods Market, a Harkins dine-in theater, three restaurants and a 3-acre park.