The Austin Planning Commission approved a proposal to redevelop the site as a mixed-use destination. 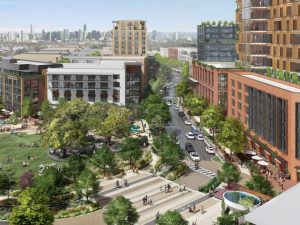 Lionstone Investments and Barshop & Oles Co. have surpassed a notable hurdle in their bid to convert the Brodie Oaks Shopping Center in Austin, Texas, into an innovative, 3.1 million-square-foot mixed-use destination. The Austin Planning Commission voted in favor of recommending the development partners’ rezoning request, with a few stipulations, as first reported by the Austin Business Journal.

Paying homage to the property’s history, Lionstone and Barshop have named the redevelopment Brodie. The partners have a grand vision for the retail property fronting Loop 360, and the rezoning of the site to a planned unit development is a necessity. The 365,000-square-foot Brodie Oaks, which debuted in 1982, will be replaced with multiple structures of varying heights and vast open space spanning the site’s 38 acres.

The redevelopment endeavor will also be green to the core, featuring approximately 14 acres of open space, representing 45 percent of the project. An additional 8 acres will serve as a naturally vegetated buffer. Furthermore, 100 percent of the water quality volume at the property will utilize green stormwater controls, including irrigation, retention and infiltration. The transit-oriented redevelopment will also offer bicycle facilities and a shared-use bike path linked to off-site trails.

Next on the developers’ checklist is a City Council first reading, scheduled for December 1, 2022. If all goes as planned, the partners will finalize the Brodie design in 2023. Delivery of the project’s initial phase is expected in 2027.

Thumbs up from the public

Brodie Oaks Shopping Center has been around long enough to have its diehard fans, but plenty of locals see the benefit of a mixed-use project and embrace Barshop and Lionstone’s idea for the property.

“The existing ocean of parking, collection of empty big boxes, greatest hits of 1980s strip mall architecture is a gross underutilization of the site that maximized impervious cover and turned its back on some of the best views in Austin,” a longtime resident of the area’s South Lamar neighborhood wrote in a letter to the Austin Planning Commission. “In contrast, the Brodie project as envisioned by the development team strikes all the right notes: it decreases impervious cover, provides an inviting connection to the greenbelt, takes advantage of the gorgeous views, includes affordable spaces for creatives and housing, aligns with existing and future transit, and activates the site with a variety of uses for 24/7 engagement.”

The mall as a mixed-use destination is an increasingly popular concept. Earlier this week, the Phoenix City Council signed off on the planned $750 million redevelopment of the historic Metrocenter Mall into a mixed-use district to be known as The Village.