In the second quarter of 2017, shopping center deal flow fell at a rate greater than any other major asset class, fueled by concerns about the changing face of retail and whether individual tenants will be able to withstand the impact of e-commerce, notes Yardi Matrix Associate Director of Research Paul Fiorilla.

Growing concern about the long-term prospects for in-store retail is creating a slowdown in the sale of shopping centers.

Retail property sales in the second quarter of 2017 fell 45.9 percent year-over-year, and first-half sales are 26 percent below 2016, according to preliminary data from Real Capital Analytics. Only $10.3 billion of retail asset sales were completed in the second quarter—the lowest quarterly total since the first quarter of 2013. Year-to-date through June, $28.7 billion of retail properties have changed hands, down from $47.4 billion in 2016 and $55.2 billion in 2015, according to RCA. Sales declined in several segments of retail, led by lifestyle/power centers, single-tenant and drug stores.

Transaction volume for all of commercial real estate is down this year, falling by about 20 percent to $177 billion in the first half of 2017, compared to $221 billion in the first half of 2016 (see chart left). Even so, in the second quarter of 2017, shopping center deal flow fell at a rate greater than any other major asset class, fueled by concerns about the changing face of retail and whether individual tenants will be able to withstand the impact of e-commerce. More than 5,000 store closings have been announced year-to-date, putting the industry on pace to easily surpass the record set during the 2008 recession, when more than 6,000 stores closed. 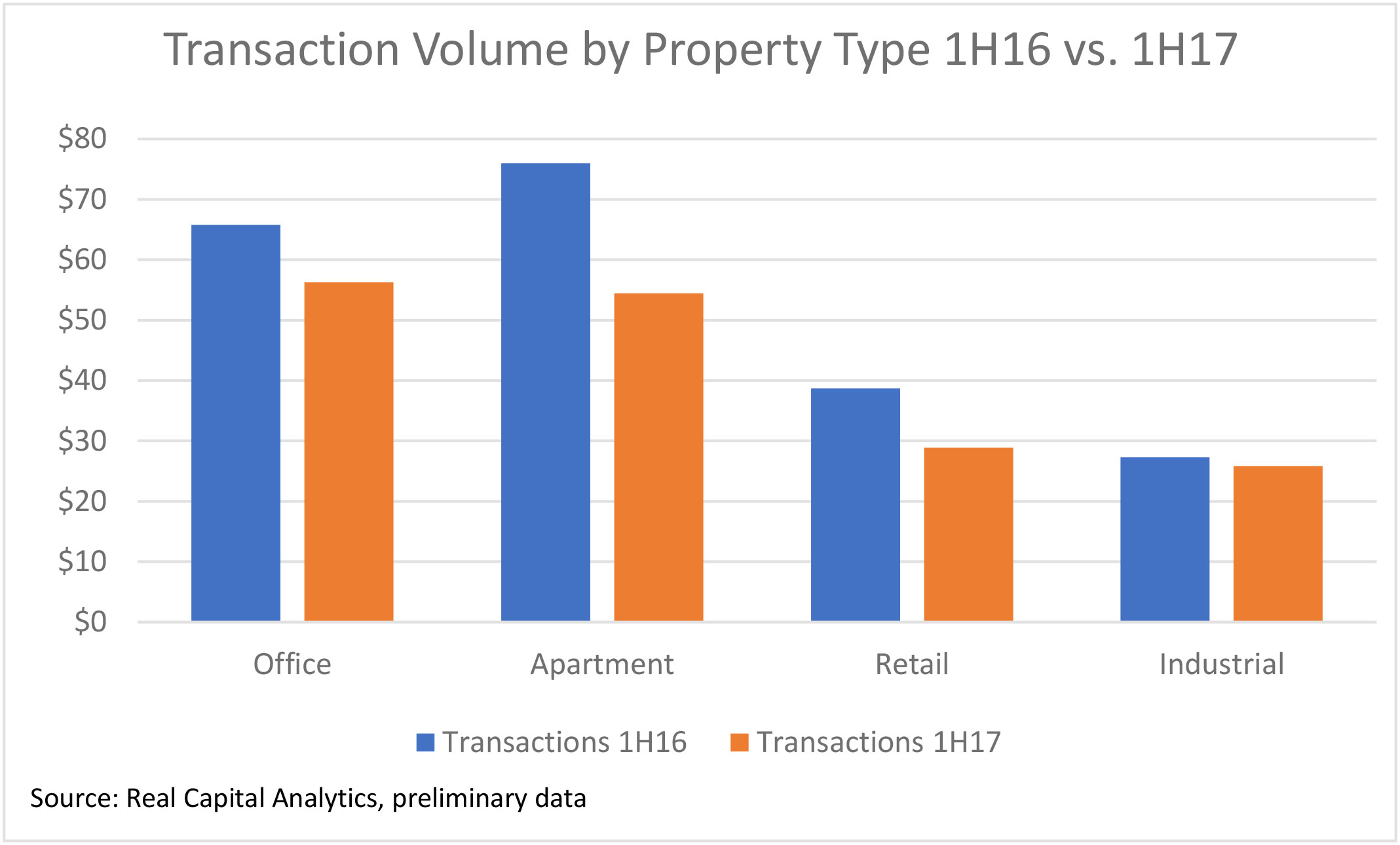 That retail is changing isn’t a novel concept, but attention on the issue has crystallized to a large degree over the last year, fueled by the spate of closings and discussions about technological trends. John Sarokhan, an executive director and head of retail asset management for the U.S. core equity real estate fund of PGIM Real Estate (formerly Prudential Real Estate Investors), said that the drumbeat of media focusing on retail store closings over the last six to nine months has left market players uncertain over the fundamentals of the sector.

“There is no lack of capital for real estate…(and) there is capital willing to take the risk, but being able to price the risk is hard,” said Sarokhan, speaking at a recent seminar on retail sponsored by the CRE Finance Council. “There is a big gap between buyers and sellers.”

Jim Costello, senior vice president at RCA, noted that property owners have little incentive to sell at a price that discounts the value of current income, unless they need access to cash or are facing a liquidity event, especially given the dearth of replacement properties available.

“The pricing issue is key. It’s hard to price today because buyers and sellers are not sure where the market is headed,” he said.

Uncertainty about the impact of future trends can have a huge influence on the transaction process. Sellers want to price based on traditional cash-flow metrics, but buyers might want a discount that takes into consideration the possibility of some tenants leaving, or the need for capital expenditures to bring in new tenants or to renovate centers to keep up with shoppers’ demands.

The reduction in cash flow is critical for property owners, but the challenge goes much deeper. Traditional anchor tenants such as Sears and J.C. Penney used to be a draw for in-line tenants that relied on department stores to create traffic, but that model is changing. Even if anchor space can be redeployed successfully, the strategy doesn’t always produce the same benefit for in-line shops. The need to rethink shopping centers has also spread beyond the regional malls to other retail types. For example, grocery-anchored centers used to be thought of as relatively bulletproof, but not anymore as giants such as Wal-Mart and Amazon make forays into the segment.

The whole concept of retail is being redefined, with questions such as how much retail space will be needed as younger generations weaned on the Internet comprise a bigger portion of the consuming public. In addition to the 15 percent annual growth of e-commerce, some believe delivery services and driverless cars will eat into demand for space. Plus, there is a consensus that retail must increasingly focus on providing an experience for shoppers, through more entertainment and restaurant uses.

Commercial real estate transaction activity is slowing across the board. Deal flow in the cycle peaked at $522 billion in 2015, and dropped 9 percent to $476 billion in 2016 (see chart left). One reason is commercial property values are at all-time highs in most segments, leading some investors to believe prices have peaked. Therefore, they might be reluctant to buy at the top of the market, especially with memories of the losses suffered by those who bought at the last cycle’s peak still fresh. 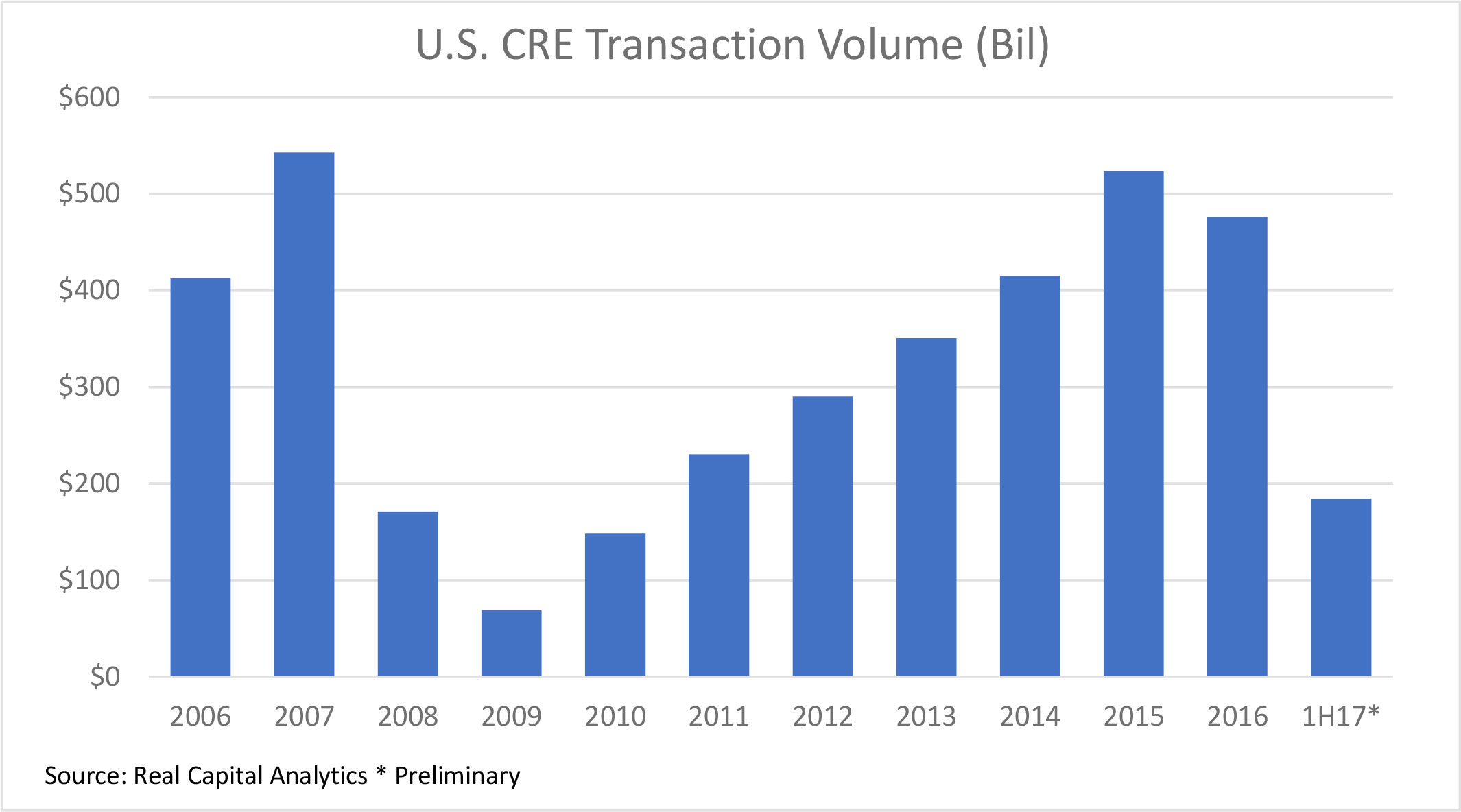 A related concern is that rising interest rates will erode the value of assets. Despite the decline in activity, acquisition yields on retail properties have remained firm, at 6.6 percent in the second quarter, which is 10 basis points higher than the average of the last two years and well below the long-term historical average in the 7 percent range. That values haven’t dropped much yet is a sign that sellers are holding the line on lowering prices, although that could change. 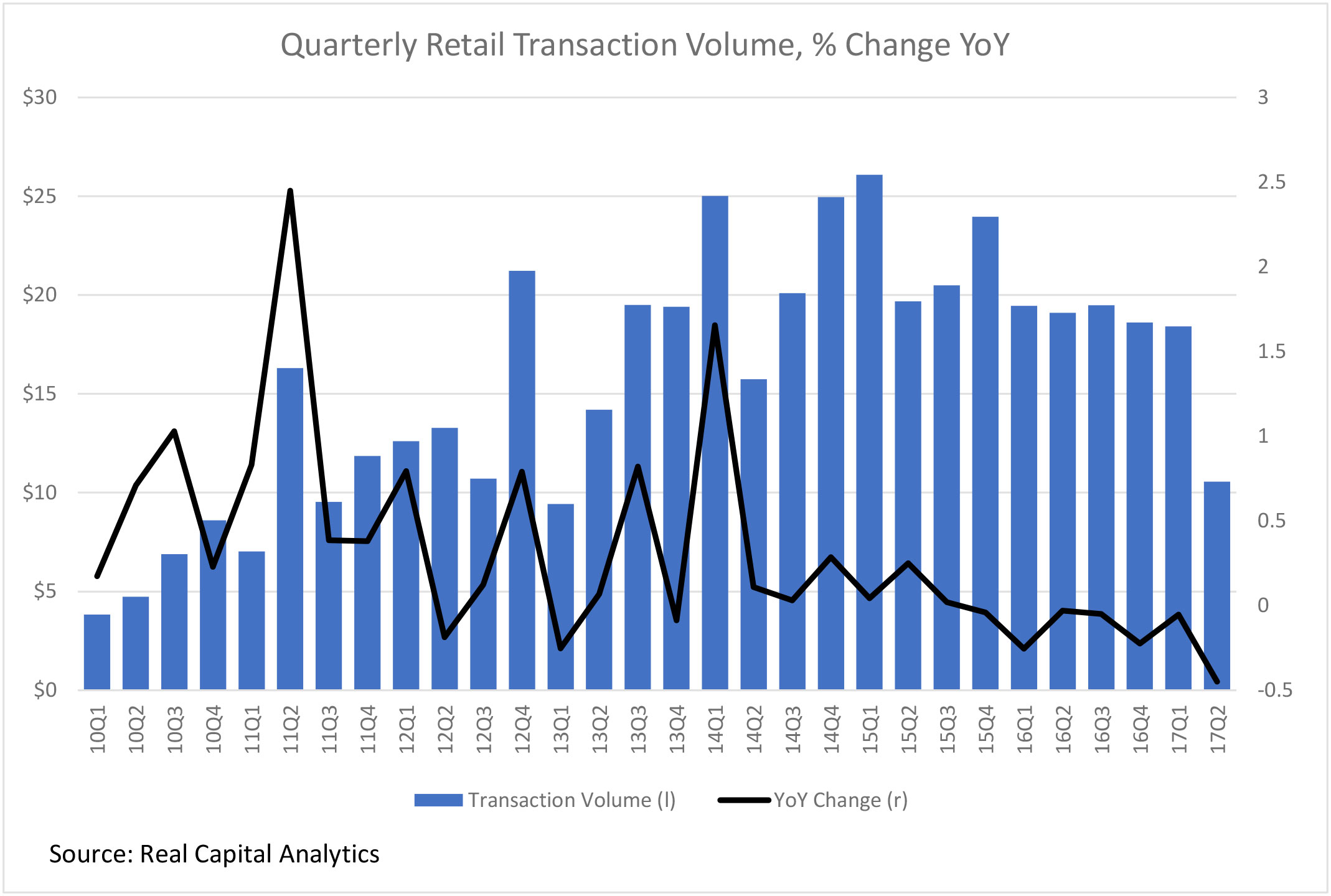 Uncertainty about the potential impact of the new administration is another investor concern. The economy has seen little change, but Congress is discussing reforming the tax code in ways that could have a large effect on commercial real estate, including changes to expensing interest and 1031 exchanges. Some investors are being cautious as they wait to see if the new rules will have an impact on their business.

Debt remains available for retail properties, although at more conservative levels than borrowers might expect. Like investors, lenders generally want to leave themselves a buffer for all but top-quality retail. And CMBS investors have started to balk at deals with heavy concentrations of retail assets. The upshot is retail owners can get financing, but for all but A-quality properties it might be at a higher cost.

The uncertainty facing retail real estate isn’t going to change anytime soon. The social and demographic factors producing these questions are only going to get more pronounced over time. The issue isn’t whether shopping habits are evolving, it is just how far that evolution goes and what that means for current retail space. Furthermore, the current consistent 2 percent-growth cycle isn’t going to extend forever, and whether and how much fundamentals deteriorate over the next 18 to 24 months is up for debate.

What is certain is that investors will express their views by what they are willing to pay. High-quality properties will continue to be in demand and fetch top value, but owners that want to transact will probably have to accept higher acquisition yields for secondary- and tertiary-quality assets.