The property is located within the Texas Medical Center. 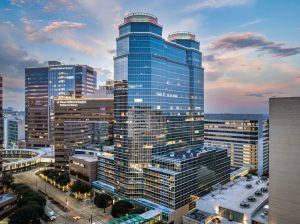 According to CommercialEdge data, Texas Children’s Hospital acquired the asset in 2016 from Catholic Health Initiatives. The purchase was part of a portfolio transaction that also included 227,670 square feet of office space at Baylor Clinic.

The Class A medical office building was originally completed in 1989 and encompasses small office suites, as well as up to 60,000 square feet of contiguous space. The 27-story high-rise features 22,802-square-foot floorplates, 17 passenger elevators, controlled access, 24-hour security, as well as 1,453 parking spaces and valet parking.

The tenant roster includes Baylor College of Medicine, Kelsey Seybold, Texas Heart Institute and CHI St. Luke’s, among others. The leasing team will target companies that can benefit from the building’s proximity to the research, life science and biomanufacturing communities within Texas Medical Center and along Houston’s Innovation Corridor.

The property is located at 6624 Fannin St., just 4.5 miles from downtown Houston. Adjacent to the building is the Houston Methodist Hospital, with other medical facilities in the surrounding area, including the VA Medical Center, less than 2 miles away, on Holcombe Boulevard.

In the past year, Transwestern has been active in several areas of the commercial real estate sector. Back in March 2022, the company launched Transwestern Ventures, a platform that targets properties including life science, office, health-care, industrial, hospitality, multifamily and land development opportunities. The platform was set to operate under the leadership of Fred Knapp.

Later in the fall, WeWork selected Transwestern as broker for its 60,000-square-foot coworking space in Bethesda, Md.

Transwestern was also active in property development. In July, Transwestern Ventures announced plans for a 390,000-square-foot biomanufacturing campus in Vacaville, Calif., which received approval in December.