This will be TCC’s second such project with Washington Capital Management in the city’s Denny Triangle neighborhood. 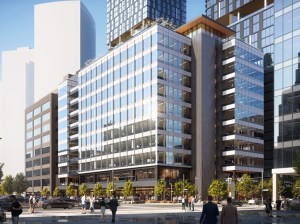 The building is slated for completion by December 2024 with the first tenant move-in scheduled for the first quarter of 2025.

Alan Cantlin, senior vice president with TCC’s Seattle office, said in prepared remarks Seattle Children’s early commitment to the project reflects 1916 Boren’s market-leading life science infrastructure and design. He said the building will be well-suited to meet the specifications for the most demanding life science buildouts.

The building will feature 14-foot floor-to-floor height and 11-foot windows to provide ample natural light and space for a range of life science uses. Amenities will include two dedicated freight elevators, chemical storage, outdoor patios on each floor, a cycling studio with locker rooms, rooftop terrace and top-floor conference center with meeting rooms and collaboration spaces. The property is situated in Seattle’s largest concentration of residential communities, retail and culinary destinations. Located at the intersection of Boren Avenue and Stewart Street, it has a transit and Walkscore of 100 and is also just blocks from Interstate 5.

Shelley Gill and Adam Brenneman of Hazelbrook Advisors represented Seattle Children’s in the lease negotiations. Paul Carr of CBRE represented the landlord. Other project partners include CollinsWoerman acting as the project’s architect of record and Lease Crutcher Lewis acting as general contractor.

1916 Boren is TCC’s second life science development in the Denny Triangle neighborhood, a growing technology hub and sought-after location for businesses and residents. It is adjacent to Boren Lofts at 1930 Boren Ave., a 10-story life science development completed in February by TCC and Washington Capital Management. The partners began work on the 136,217-square-foot Class A project in August 2019 and sold the building to Oxford Properties Group in April for $119.1 million. Located within walking distance of Amazon’s corporate headquarters, the building also has about 4,400 square feet of retail. The development has more than 15,000 square feet of uninterrupted floorplates, 15-foot-high ceilings and a rooftop terrace.