To find promising, underserved, markets for multi-family, you sometimes need to look only a short distance from hot, overbuilt markets. 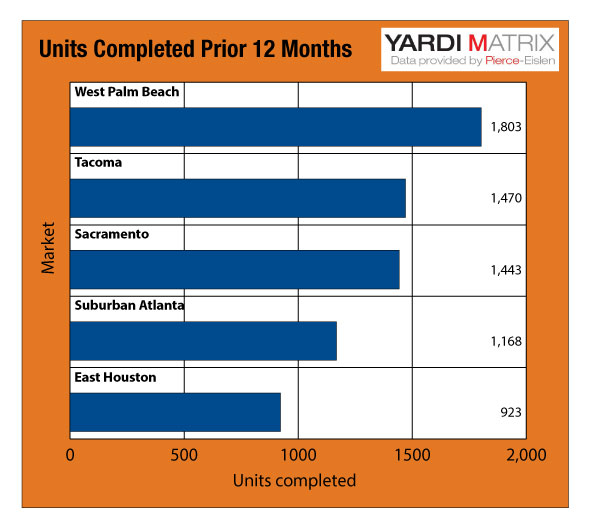 To find promising, perhaps underserved, multifamily markets, you sometimes need to look only a short distance from hot, often overbuilt markets, according to Steve Sorensen, associate director of analytics for Yardi Matrix. Those hot markets, he said, receive a lot of media attention, which might make the industry a little myopic and encourage over-development.

Using monthly Topline rents compiled by Yardi Matrix, Sorensen said, “a case can be made that multifamily development could be shifted to take advantage of the strong rent increases in these less-developed markets.” His analysis has identified five such markets.

For example, Seattle continues to be one of the nation’s most robust apartment markets. Over the past 12 months, it recorded a rental increase of $115, or 9.2 percent, while delivering 11,202 units.

1)  Next door, however, Tacoma completed only 1,470 units. And though its market is not as strong as Seattle’s, rent growth was more than respectable at $62, or 7.1 percent, qualifying it as the 20th best market nationally for percentage rent growth.

2)  Sacramento added a paltry 1,443 units over the past 12 months, in contrast, and posted rent growth of $100, or 10.2 percent, making it 5th best in the nation for percent rental increase. With Sacramento being the state capital, Sorensen said, you might think government is the driving force here, but he explains that the private sector is the larger employer and is notching up much bigger employment increases.

Urban Atlanta has been very hot for several years, and this past 12 months saw 8,516 units completed.  Rental increases of $68, or 7.6 percent, continue to make it one of the nation’s better markets.

3)  Suburban Atlanta, however, added only 1,168 units to inventory, while rent growth was recorded at $81, or 9.7 percent, coming in as the eighth best market for percent change. The highest percentage rental increases have been in the Sandy Spring North (12.8 percent), Canton/Woodstock (11.9 percent) and Lawrenceville (11.9 percent) submarkets.

4)  East Houston recorded an anemic 923 completions during the past 12-month period, one of the lowest figures in the nation. But rent growth was an impressive $63, or 8.0 percent, making it the 10th best percentage increase.

5)  The final market, West Palm Beach, does not fit into the “stepchild” category, but is still noteworthy, according to Sorensen. It completed only 1,803 units, and Topline rents show a 12-month increase of $97, or 7.8 percent, 12th best nationwide in percentage rent increase. “The small number of completed units is likely due to a lack of land suitable for multi-family development or high land costs,” Sorensen added.

“There is still room for multi-family development if you know where to look.” Sorensen concluded. “It may even be next door.”