Top 10 LEED-Certified Buildings in Texas in 2019

Houston, Dallas and Austin hold the top positions for the highest-ranking LEED-certified office buildings in Texas in 2019.

In early 2020, the U.S. had more than 35,400 LEED-certified buildings representing over 6.4 billion gross square feet of space, while globally the U.S. Green Building Council’s program counted more than 48,600 such projects, recording a presence in 178 countries and territories.

We wanted to zoom in on the Lone Star State’s LEED evaluation activity in 2019, focusing on the elite Platinum and Gold levels of certification. Compiling data from the organization’s official website, we’ve found that the number of LEED Gold and Platinum-certified projects in Texas dropped from 99 in 2018 to 50 last year. Of those 50  developments, 28 were office assets, followed by nine education, healthcare and multifamily properties (three each), as well as several other property types, including a data center, a community center and several single-family projects.

Focusing further on the office segment, we sorted the highest-scoring projects to see what set them apart. The LEED-certified building list below reflects our findings. 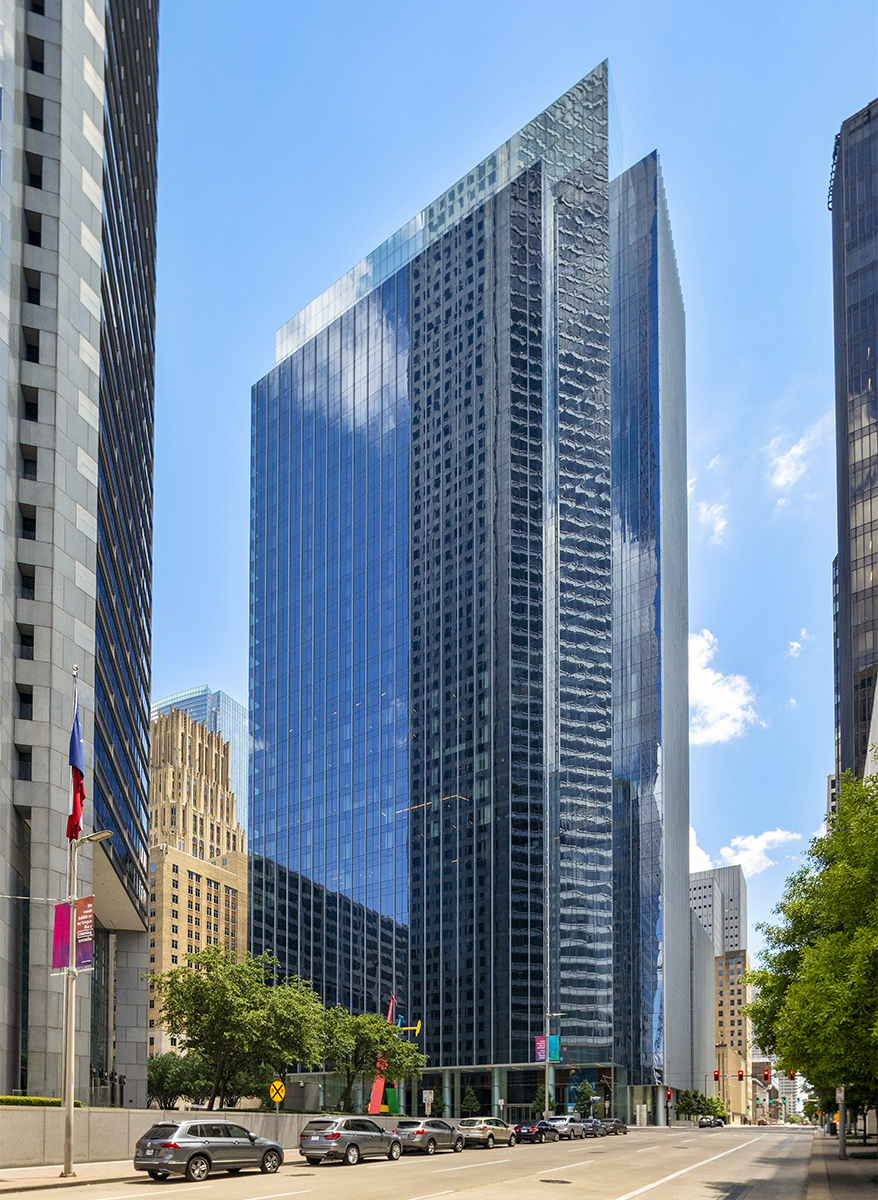 Boasting an 83-point scorecard, Skanska’s development at 800 Capitol St. in Downtown Houston shares the first spot in the ranking with Austin’s Third + Shoal. Standing 35 stories tall, this 775,000-square-foot tower is the first commercial office development in Houston to achieve LEED Platinum, and the largest LEED v4 Platinum Core & Shell project in the world.

To achieve the certification, the development’s sustainable features include a 50,000-gallon rainwater collection system for reuse and landscape irrigation and restrooms, secured bicycle storage room with access to lockers and showers, 90 percent access to daylight, and expansive views for tenants. The tower also features a high-performance façade that reduces solar heat gain. In addition, the building is equipped with an energy recovery wheel to precondition fresh air intake, as well as district cooling to provide chilled water throughout the facility, which means lower cooling costs and unlimited service capacity to tenants.

Last December, Skanska divested its 90 percent interest in the project, selling it to an affiliate of Beacon Capital Partners. Tenants in the building include Bank of America, Waste Management, Winston and Strawn, and Quantum Energy Partners. 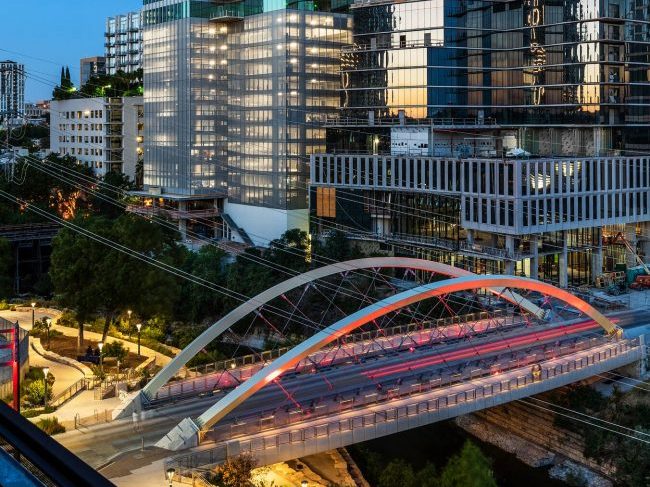 The property is located at 601 W. Third St. and features a series of sustainability-centered characteristics, including floor-to-ceiling glass windows with insulated glass with Low-E, high-performance glazing; large private terraces; 11 outdoor balconies and a 4,000-square-foot rooftop terrace; a bike valet; 200-plus bike lockers; and showers. 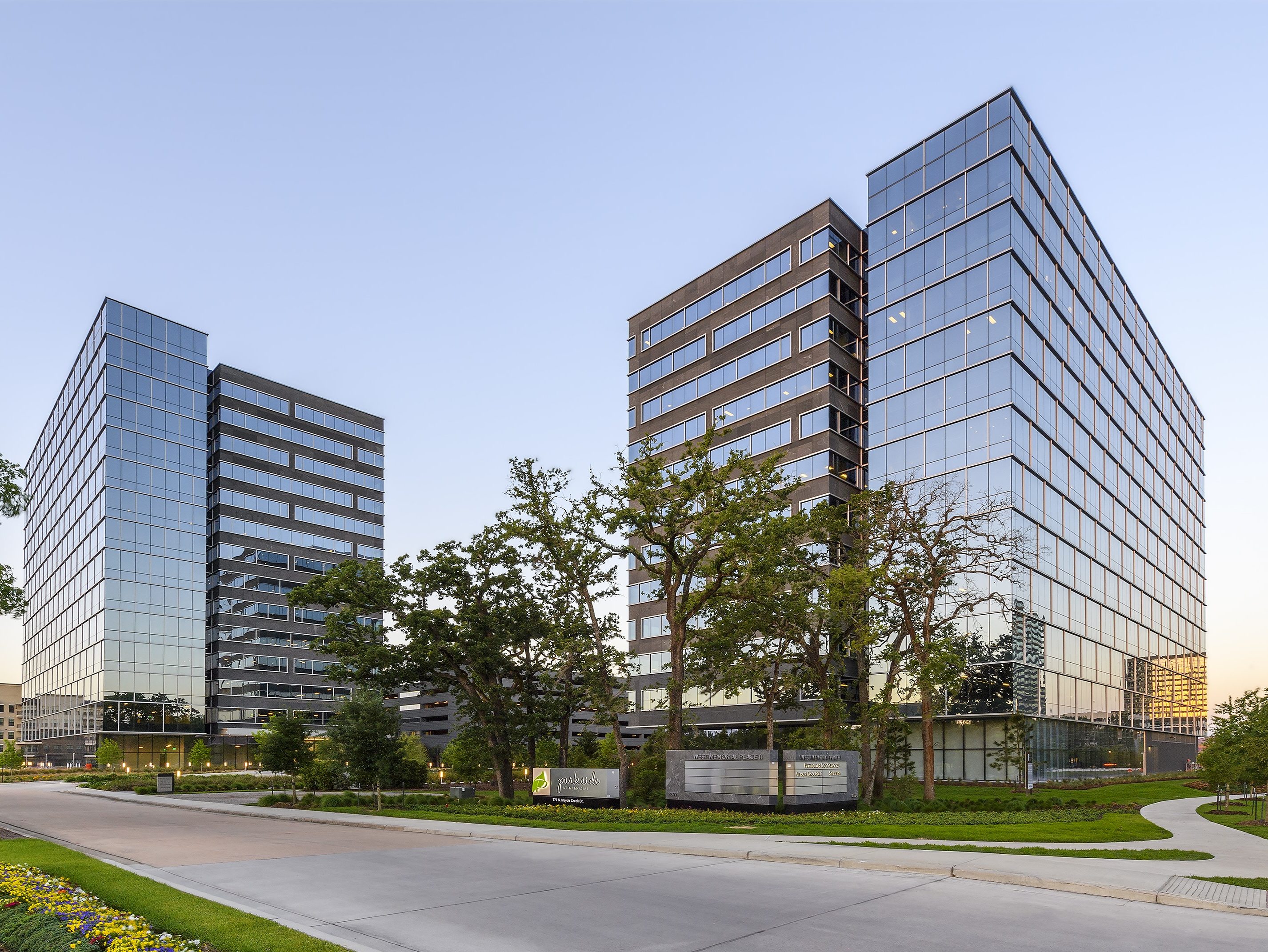 With an 81 point scorecard, this 385,000-square-foot mid-rise at 15377 Memorial Drive is part of the two-building campus owned by Skanska. West Memorial Place II is essentially the second phase of the project. The development was awarded the certification just months after the the 39-story Bank of America Tower listed above. To achieve such a high score, the 14-story project features an exterior glass curtain wall that reduces heat gain while providing natural light in abundance, in addition to ample exterior views. Moreover, the asset is served by an integrated building monitoring system that combines information about the water and energy used by the tenants.

Energy efficiency is improved through an energy recovery wheel that pre-cools the air before it goes through the building’s mechanical systems, while daylight harvesting systems generate garage lighting and motion sensors help save energy. An innovative method to save energy is the demand control ventilation system which uses carbon dioxide sensors to monitor and regulate the amount of fresh air used depending on the occupancy level.

Skanska kept ownership of the asset which includes tenants BP and IHI E&C. The entire campus is managed by Hines. 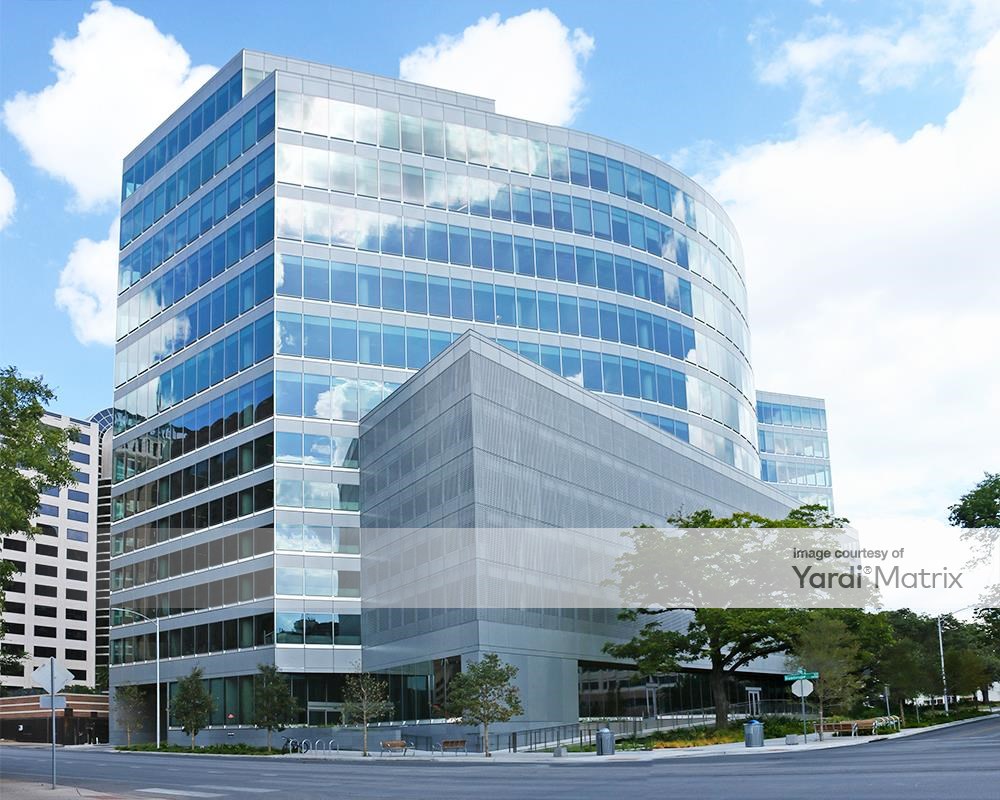 With 70 points, the SXSW headquarters at 1400 Lavaca St. in Austin, received a LEED Gold Core & Shell award in addition to an Austin Energy 2-Star certification. The 13-story development boasts a unique geometry designed by Pei Cobb Freed & Partners and had Harvey-Cleary Builders as the general contractor.

Sustainability features include a Low-E curtain wall glazing that helps optimize heating and cooling loads, while the s-shape plan responds to the site’s solar orientation. In addition, the development has rain gardens on the front plaza, outdoor decks, a rooftop terrace, xeriscaping and landscaping, low plumbing features and low VOC interior finishes. The center also features bike storage and shower rooms, electric car charging stations in an attached 300-space parking garage and a mechanical system that is 14 percent more efficient than that of a baseline building.

In addition to housing SXSW’s headquarters, which was recently significantly impacted by the COVID-19 pandemic, the building also houses tenants such as WeWork, Butler Snow and Parthenon Capital. 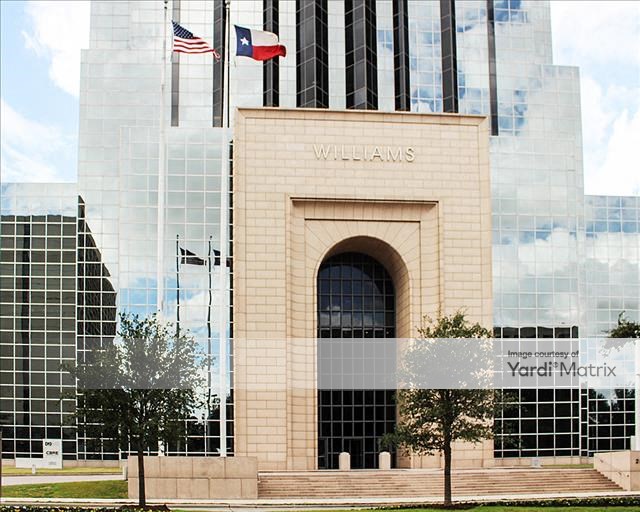 Built in 1983, the 64-story tower at 2800 Post Oak Blvd.—owned by Invesco and managed by Hines—has held on to its LEED Gold certification since 2009, as well as six Energy Star labels and an Energy Star rating of 85. The latest recertification was granted in June last year with a scorecard of 67 points. These stats mean that the asset is 34 percent more energy efficient than the average office building, with significant greenhouse gas reductions. Additional green features include reduction in indoor potable water use through low-flow fixtures, heat island reduction through reflective surfaces, a comprehensive recycling and waste diversion program, green build-out guidelines for tenants, as well as bicycle parking.

The building, clad in silver gray reflective glass and anodized aluminum, is the product of Philip Johnson and John Burgee and was built to function as two buildings stacked one on top of another, each with its separate elevators, lobbies and garages. The bottom floors are occupied by the Williams Corp., while the upper ones house a variety of tenants including Trammell Crow Co., Servcorp, Rowan Cos., CBRE, Hines, and Transcontinental Gas Pipe Line Co. 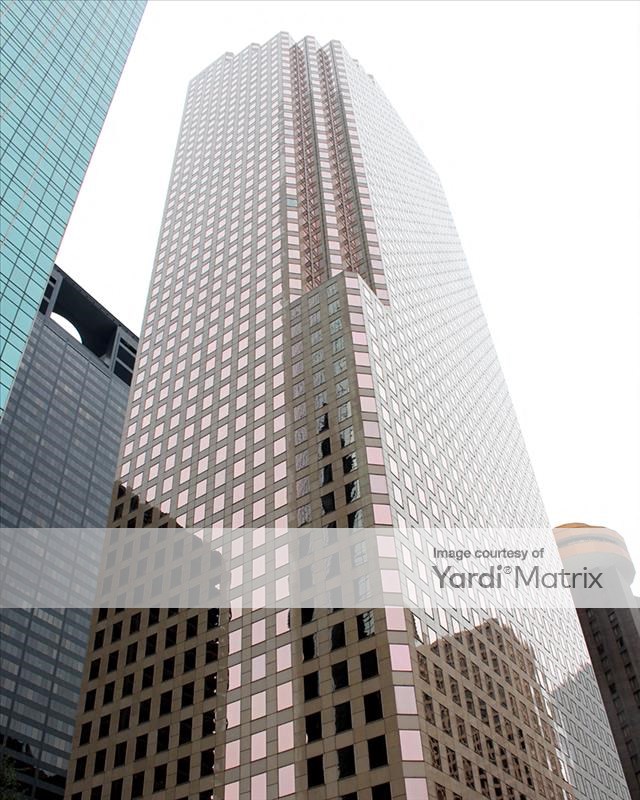 Just like the taller Williams Tower, Enterprise Plaza has been bearing the LEED Gold certification since 2009, as well as an Energy Star rating. Standing 55 stories tall in downtown Houston, the tower, clad in polished Spanish Rose granite with rose-colored windows, known also as 1100 Louisiana, was built in 1980 by Hines—which is also its owner—and architectural firm Skidmore, Owings and Merrill. 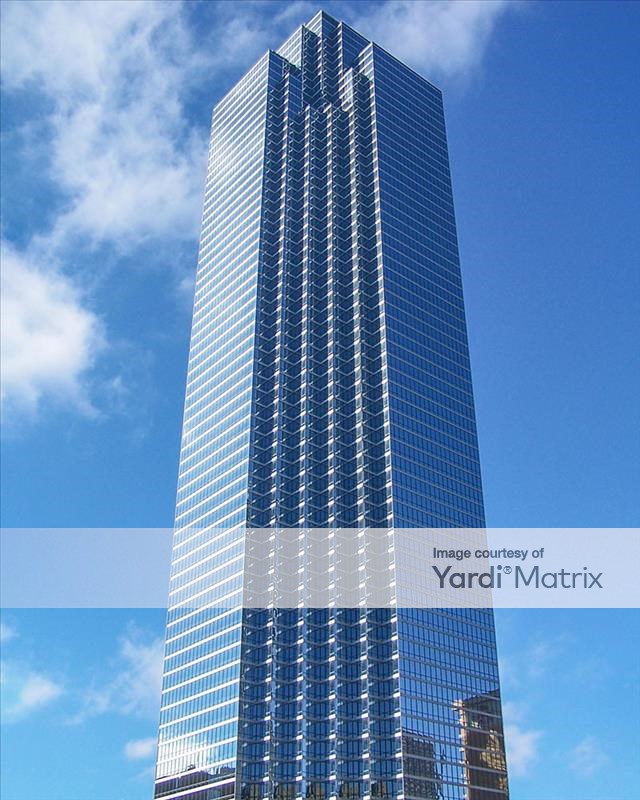 Dubbed Beacon of the West End as it is Dallas’ tallest building, this Metropolis asset also scored 66 points under USGBC’s rating system. In addition, it holds a BOMA 360 award and an Energy Star rating. Completed in 1985, the 74-story tower at 901 Main St. was designed by JPJ Architects and developed by Bramalea Limited of Toronto.

Bank of America Plaza features six individual cooling towers and three chillers with a 3,950-ton capacity. Its electrical capacity is powered by six feeders served by one substation supplied by independent ONCOR power generating stations through several diverse feeders on the ERCOT grid. The tower operates more efficiently than 76 percent of similar buildings, saving roughly 67,000 kWh per year. It diverts more than 582,000 pounds of consumables from the landfills through its recycling program announced savings of more than 2.5 million gallons of water annually with water efficiency strategies. 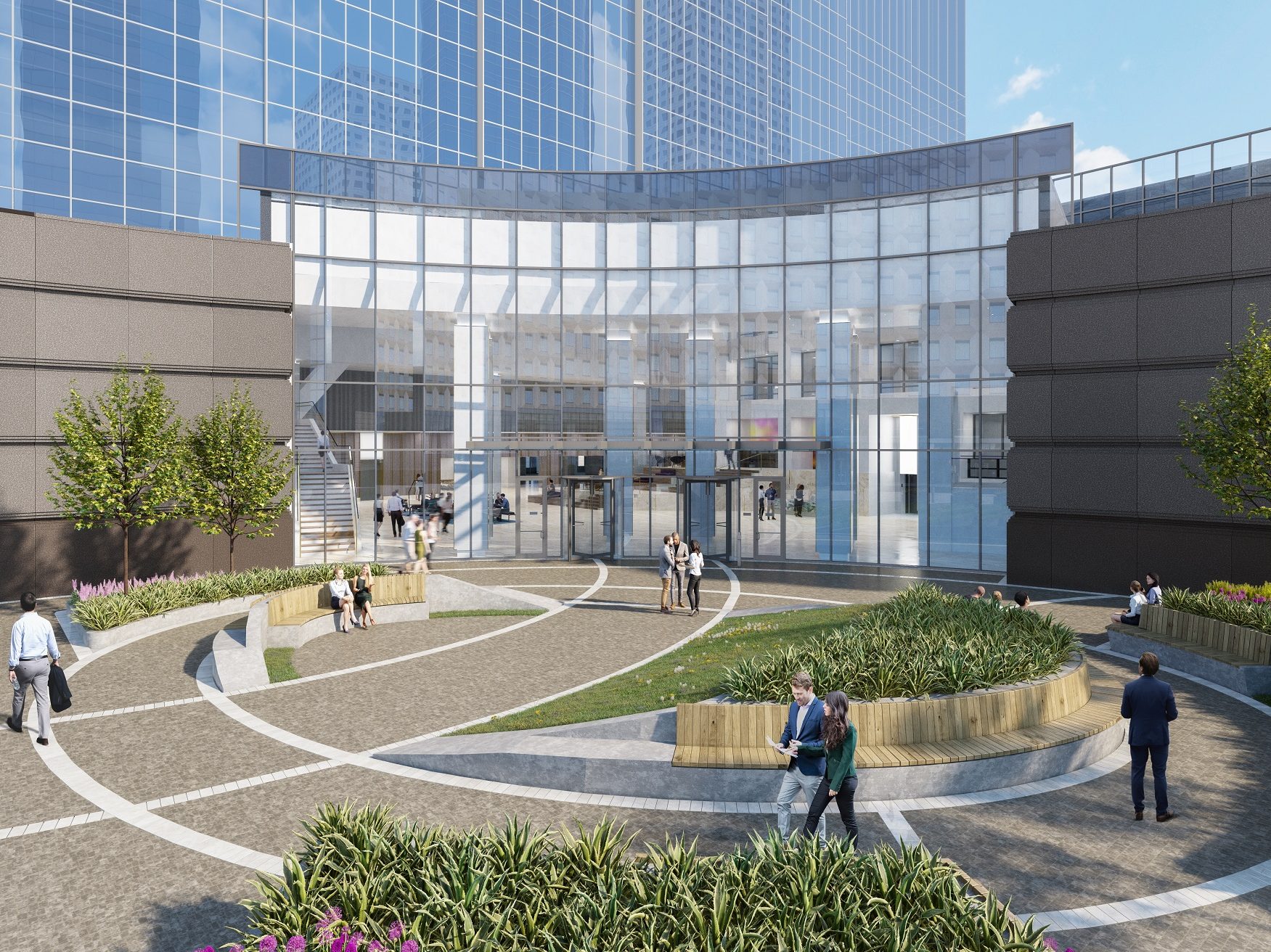 Rising 53 stories above Houston’s Skyline District at 1111 Bagby St., Heritage Plaza is part of Brookfield Properties’ asset portfolio. Although the skyscraper was recently LEED recertified to the Gold level with a scorecard of 64 points, the owner announced renovation plans that would improve the tower’s exterior by adding a structural glass curtain wall, its main lobby by introducing a live plant wall, as well as new floor and wall finishes throughout, tenant conferencing and sky lobby areas.

The landmark, designed by M Nasr & Partners and completed in 1987, is famous for its odd stepped granite formation at the top resembling a Mayan temple, which was inspired by the architect’s trip to the jungles of Mexico. Notable tenants include EOG Resources, Deloitte and The Blackstone Group. 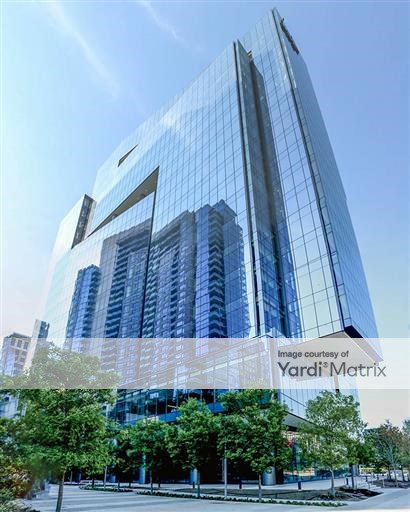 Located at 2101 North Pearl St., this 20-story project that is also called PwC Tower at Park District was completed in 2018 and is owned by Trammell Crow Co. From the start, the asset designed by HKS targeted achieving the LEED Gold status, which it did with a scorecard of 63 points.

The building is at the center of Downtown Dallas, the Arts District, Uptown and Klyde Warren Park with which it is directly connected. It features several on-site restaurants, outdoor amenity spaces, on-site banking and valet. The PwC Tower is connected via the grand plaza to a 34-story residential tower dubbed the Residences at Park District, which was awarded USGBC’s LEED Silver certification upon completion. 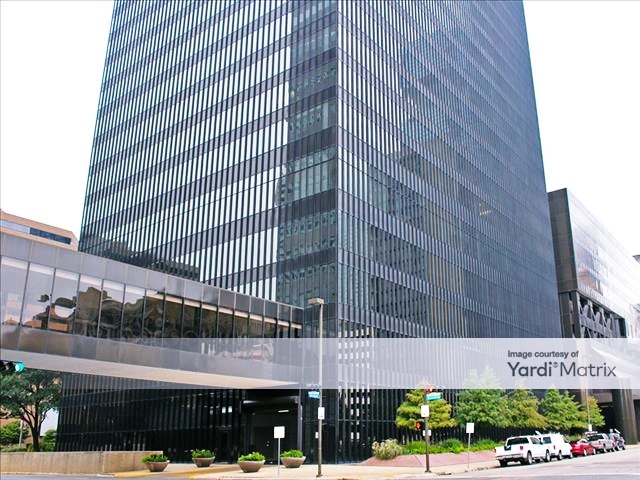 The mixed-use project, formerly known as 1 Houston Center, achieved the LEED Gold recertification with a total of 62 score points. The 46-story asset was first certified under USGBC’s rating system, also to the Gold level, in 2008, and holds an Energy Star rating since 2002.

The current owner, Brookfield Properties, acquired the tower in 2017 as part of one of Houston’s largest office transactions ever. In early 2019, the firm announced a major redevelopment process that will upgrade the asset’s lobby to include new conferencing venues and co-working spaces, will build sky bridges to connect it with The Shops at Houston Center and add a fitness facility and a revamped retail and dining experience.

The revamp is poised to attract more tenants into the building that currently houses LyondellBasell, Haynes and Boone, Boston Consulting Group, Adams and Reese and Mitsubishi Corp.