Texas A&M to Build Research Campus in Fort Worth

Construction on the first of three buildings will begin this summer. 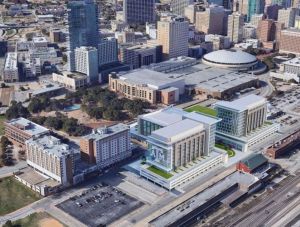 The Texas A&M University System has committed to starting construction on a three-building research campus in downtown Fort Worth, officially named Texas A&M-Fort Worth.

The complex will be built on four blocks at the site of the Texas A&M School of Law, just northwest of the intersection of I-35W and I-30, and will provide a variety of programs offered by Texas A&M University, Tarleton State University and several A&M System agencies. (The law school was A&M’s initial foothold in Fort Worth; in 2013, the university bought the law school from Texas Wesleyan University).

The campus is intended to eventually anchor a technology and innovation district planned around the redevelopment of the city’s convention center.

The high-rise complex will include classrooms, labs, and flexible research and maker spaces that can be used by the public and private sectors for academic programs, workforce training and collaborative research in engineering, emergency management communications, agriculture, health sciences and visualization, among other fields.

The first building, to be started this summer and scheduled for completion in 2025, will be the Law & Education Building, financed with bonds backed by the Permanent University Fund and other sources.

The other two facilities, the Research and Innovation building and the Gateway conference center and offices, will be financed with city-issued bonds secured by leases to the A&M System and private-sector development firms. A developer has not yet been chosen, and start dates for these two buildings have not been announced.

The university stated that the planning process began two years ago, when Fort Worth and Tarrant County officials and representatives of the business community invited the Texas A&M System to develop a research presence in the city. Fort Worth reportedly is the largest Texas city without a significant presence by a large public research university.

Stantec will serve as the architect of record and Pelli Clarke & Partners as the design architect for the Law & Education Building. The construction management team will comprise Turner Construction Co., CARCON Industries, Source Building Group Inc. and Dikita Enterprises.

Although the Dallas–Fort Worth Metroplex’s economy is doing well for population growth and overall employment, the office sector has seen a slight amount of negative net absorption recently, according to a fourth-quarter report from Cushman & Wakefield. As in so many markets nationwide, the hybrid work model has resulted in rising subleases and a shift to Class A space.

The downtown Fort Worth office market has an overall vacancy of 18.1 percent, on an inventory of 7.8 million square feet. That’s roughly in line with the metrowide vacancy of 21.0 percent, also according to Cushman & Wakefield.