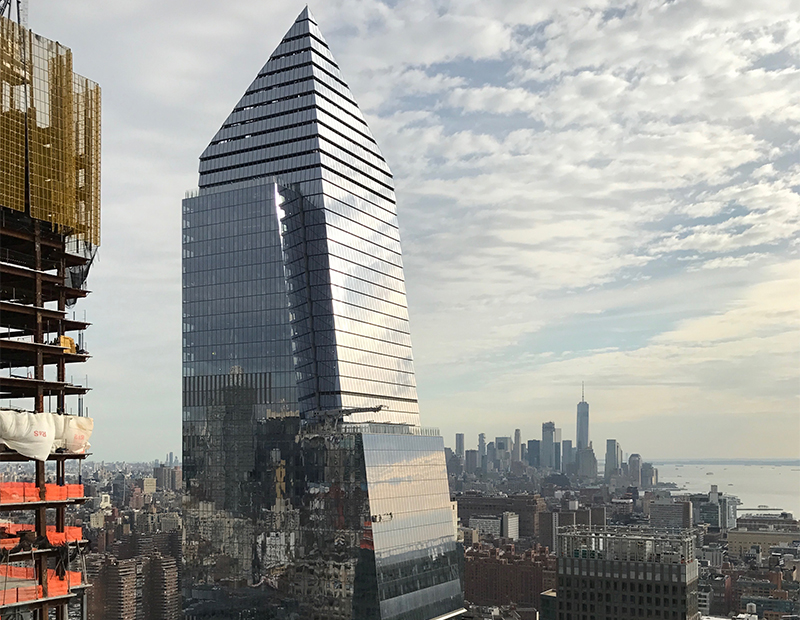 “The designation of 10 Hudson Yards as LEED Platinum is a testament to our commitment to resiliency, a reflection of the innovative design features and exemplifies our vision to design and develop the most connected, measured and technologically advanced digital community ever,” L. Jay Cross, president of Related Hudson Yards, said in a prepared statement.

Related and Oxford opened the doors of the Kohn Pedersen Fox Associates-designed 10 Hudson in May 2016, bringing a 52-story high-rise of premier office accommodations and ground-level retail space to Manhattan’s West Side. The fully leased tower offers tenants—a group that includes the likes of L’Oréal USA, tech firm SAP and a bevy of other big names—any number of amenities and extras. 10 Hudson now holds the distinction of being the first commercial office building in New York to achieve the coveted Platinum rating since USGBC’s launch of the LEED v2009 rating system.

The list of criteria for LEED Platinum certification is a long one, and 10 Hudson scored points with a host of features, including 1.2 MW of gas-fired micro turbines that generate power and hot and chilled water in a manner that is twice as efficient as traditional systems. The building also contains a storm water retention tank that harvests rainwater for irrigating the property’s terrace landscaping, and a 100 percent raised flooring, which allows for improved temperature control and cleaner air. Another LEED-worthy highlight at 10 Hudson is the Operation and Energy Control Center, which, among other tasks, coordinates building performance.

“LEED Platinum is a special accomplishment in a project already filled with many, and it solidifies 10 Hudson Yards as the benchmark for what great buildings can aspire to,” Blake Hutcheson, president & CEO of Oxford Properties Group, said in prepared remarks.

2017 was full of LEED-related firsts, from the local level to the global stage. On the heels of a substantial upgrade, the 1950s-era Perry Brooks Tower in Austin became the first LEED Platinum office renovation in the city. Mercedes-Benz Stadium, home to the NFL’s Atlanta Falcons, took the title of the first professional sports stadium in North America to achieve LEED Platinum certification. And making international news, Washington, D.C., was named the first LEED Platinum City in the world.