A fintech company plans to relocate its main office from a Washington, D.C., suburb. 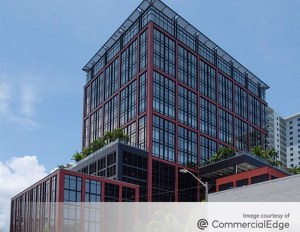 NewDay USA has just celebrated taking occupancy at its second headquarters with the unveiling of a new company sign at 360 Rosemary, the Related Cos.’ recently completed office tower in West Palm Beach, Fla.

NewDay’s move into a 53,300-square-foot space at 360 Rosemary is just the beginning of a planned expansion in the bustling West Palm Beach office market, as the fintech company is presently in negotiations with Related to develop a property that would serve as a 200,000-square-foot corporate headquarters, replacing its current Washington, D.C.-area home base in suburban Maryland.

NewDay inked its lease for space at 360 Rosemary in the first quarter of 2021, securing the top two floors of the 20-story tower. The national VA mortgage lender had zeroed in on Florida as the best location for its second headquarters, which is now home to 250 employees. According to Rob Posner, CEO of NewDay USA, Florida has placed a high priority on attracting businesses to their state because they realize the importance of companies that create high-paying and highly skilled jobs for economic development.

“[Florida’s officials] actively support economic development,” Posner told Commercial Property Executive. “We’ve had the opportunity to meet with them and their staffs many times. They have genuine curiosity about what you are trying to achieve and how they can help you.”

NewDay expects to increase its staff at 360 Rosemary in the coming months, having secured $1.8 million in incentives through the West Palm Beach Community Redevelopment Agency in early 2021 for training and new hires. The second headquarters will serve as the workplace for a total of more than 500 team members in 2023.

NewDay’s talks with Related regarding the construction of a new corporate headquarters building in West Palm Beach come nearly a decade after the company moved into its current center of operations at 8160 Maple Lawn Blvd. in Fulton, Md. In 2013, the mortgage lender had set up shop in 70,000 square feet at the then-new, 100,000-square-foot building, which is part of the office portfolio of St. John Properties. Now, NewDay is prepared to leave its longtime home for reasons beyond cutting-edge commercial real estate options.

“Since 1999, we have had the privilege of coming to work each day in the State of Maryland to serve veterans,” Posner said. “As a neighboring state to Washington, D.C., with institutions like NASA, the National Security Administration and the Social Security Administration located in the state, Maryland also seems to have an over-reliance on the federal government for jobs. It’s important for our elected officials to focus on creating economic incentives for companies that can bring high-paying, high-skilled jobs to the state, as well as having a favorable tax environment for its citizens.”

West Palm Beach fits the bill for NewDay and a bevy of other office users. As noted in a report by Avison Young, the flight to quality and ongoing demand from new-to-market tenants have spurred the continuation of high leasing activity. Despite robust office construction in West Palm Beach, the Class A sector recorded positive net absorption in all three quarters of 2022, for a total of roughly 275,000 square feet, according to the report.

“Great for our team and NewDay to be able to be part of the transformation in West Palm. We believe West Palm is going to be one of the most dynamic cities in America to work, live and play,” Posner concluded.