Micron to Build $100B Semiconductor Plant

Scheduled to break ground in 2024, the project will be New York State’s largest-ever private investment. 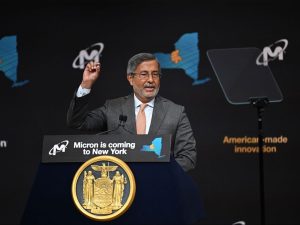 A giant semiconductor fabrication facility is coming to Syracuse, New York. After initially eyeing Austin for a potential site, Micron Technology has announced plans to build a $100 billion memory ‘megafab’ in the town of Clay, representing the largest private investment ever made in the state.

The project is estimated to create 9,000 permanent high-paying jobs over the next two decades.

Micron plans to invest the funds over a 20-year period, with an initial phase of $20 billion to be allocated by the end of this decade. CEO Sanjay Mehrotra, along with U.S. Senator Charles Schumer, Governor Kathy Hochul and Onondaga County Executive Ryan McMahon broke the announcement yesterday at Syracuse University, Syracuse.com first reported.

The megafab will enable Micron to achieve its goal of increasing its U.S.-based DRAM production to 40 percent of the company’s global output. The Syracuse facility will complement Micron’s other ongoing project in its home state of Idaho, where the manufacturer recently announced its plan to construct a memory fab, and committed $15 billion to its development.

Micron will begin site preparation work in 2023, while construction is slated to begin in 2024. Four manufacturing plants are planned, each comprising 600,000 square feet of cleanroom space, amounting to a total of 2.4 million square feet—making it the largest in the U.S. In addition to the 9,000 high-paying jobs—with estimated annual salaries of more than $100,000 according to Gov. Kathy Hochul—Micron’s megaproject will also create an additional 40,000 jobs during development, including supplier, contractor and supporting roles.

This investment is a result of a decades-long search by Onondaga County and New York State officials to bring a manufacturer to the White Pine Commerce Park, located on the Northeast quadrant of the intersection between State Route 31 and Caughdenoy Road. The entire park is owned by the Onondaga County Industrial Development Agency. Overall, the Micron facility will encompass 1,400 acres, according to the announcement provided by the Governor’s Office.

Among several other reasons, Micron chose White Pine Commerce Park due to its access to water, as well as reliable energy via a power substation located just one mile to the Northwest. This helps achieve the company’s stated sustainability goals with the upcoming fab. 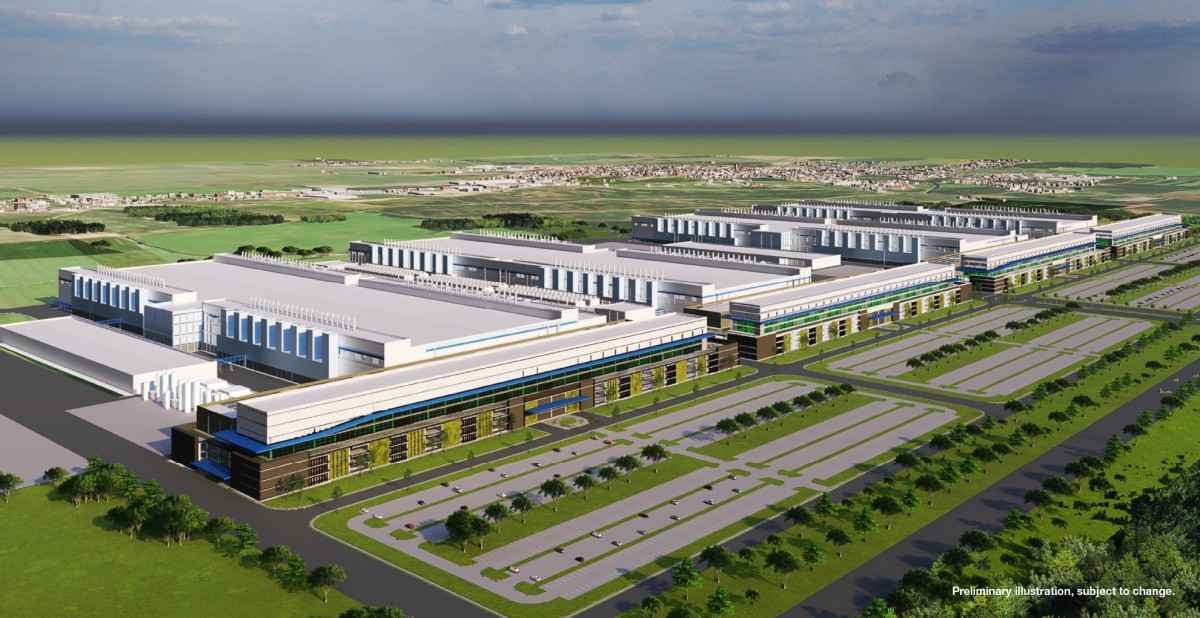 Micron aims to build the facility in line with its sustainability framework. This includes using 100 percent renewable electricity and a building design that will meet LEED Gold standards. Micron will use the latest technology to mitigate and control greenhouse gas emissions at the Syracuse facility, supporting its goal to achieve a 42 percent reduction of emissions by 2030.

The state of New York will support the upcoming facility with a $5.5 billion incentive package over the life of the project, in addition to federal grants and tax credits from the CHIPS and Science Act. Moreover, the Town of Clay and Onondaga County will provide infrastructure support for Micron.

Together with Micron, the state of New York will also invest $500 million in community and workforce development programs over the duration of the project. Of these, $250 million will be invested by Micron in the Green CHIPS Community Investment Fund over the two-decade period. New York will provide $100 million, while the remaining $150 million is slated to come from local and national partners. 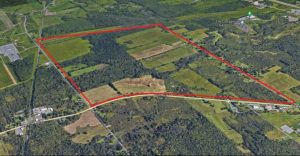 At the Syracuse event, Mehrotra stated the main reasons why Micron chose New York for this massive expansion. Upstate New York provides a diverse talent pool, along with a significant military population, with strong education partnerships and K-12 education programs. The state’s long history of semiconductor research and manufacturing were also a main reason, Mehrotra said during the event.

“Micron’s $100 billion investment in Upstate New York will fundamentally transform the region into a global hub for manufacturing and bring tens of thousands of good-paying high-tech and construction jobs to Central New York. This project is a dramatic turning point for a region that has faced decades of lost manufacturing jobs, and, in combination with New York’s already robust microchip industry from the Hudson Valley, Albany, and the Mohawk Valley to Binghamton, Rochester, and Buffalo, it will put Upstate New York on the map in a way we haven’t seen in generations,” Senate Majority Leader Charles Schumer said in a prepared statement.

Following bipartisan Congress approval, the CHIPS Act was signed into law in August. Its aim is to boost U.S. semiconductor investments by directing $280 billion in funds over the next decade. According to an article by McKinsey, the U.S. currently produces 12 percent of the world’s semiconductors, down from the 37 percent in the 1990s. Semiconductors are poised to become a $1trillion industry by the end of this decade, the same article reported.

The new legislation will provide a boost to companies such as Micron, Texas Instruments, Intel and TSMC, all of which have recently announced large commitments to create new manufacturing locations across the U.S.—just last month, Intel announced it broke ground on a $20 billion facility in Ohio, which also benefited from the recently signed legislative package.