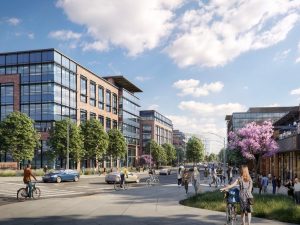 The developer’s investment partners for $1 billion project include Goldman Sachs Asset Management’s Real Estate Group and an affiliate of Beacon Capital Partners. Site work began in the third quarter of 2022 and the transit-oriented campus is expected to welcome its first tenants by the end of 2024.

According to CommercialEdge data, Lane Partners has a current pipeline of eight office properties in various stages of development in the San Francisco market, adding to a roughly 3.1 million-square-foot existing inventory.

Designed by DES Architects + Engineers to achieve LEED Gold and Fitwel 2 Star certification standards, Southline is set to encompass seven six- to seven-story buildings with floorplates ranging from 45,000 to 100,000 square feet. Common-area amenities will feature a full-service restaurant, conference room, fitness and wellness center, coffee bar and gaming room, among others. The campus will also feature 7 acres of open space with a beer garden.

The project’s first phase will feature six stories of lab and office space, as well as a six-story parking garage. Amenities will include a fitness center, restaurant, conference facilities and bike storage.

Phase One is taking shape on a 28.5-acre site at 30 Tanforan Ave., 11 miles from downtown San Francisco and only 4 miles from the San Francisco International Airport. The development is adjacent to the San Bruno BART station, as well as San Bruno Caltrain and South San Francisco Caltrain Station, offering tenants multiple commute options.

In the last two quarters of 2022, several office and life science projects got green light from the local authorities  across the Bay Area.

In July, Transwestern Ventures and the City of Vacaville, Calif., announced plans to develop a 390,000-square-foot biomanufacturing campus. and received the Planning Commission’s approval after less than 90 days. Set within the Vaca Valley Business Park, its location is in proximity to Sacramento, Calif. and San Francisco.