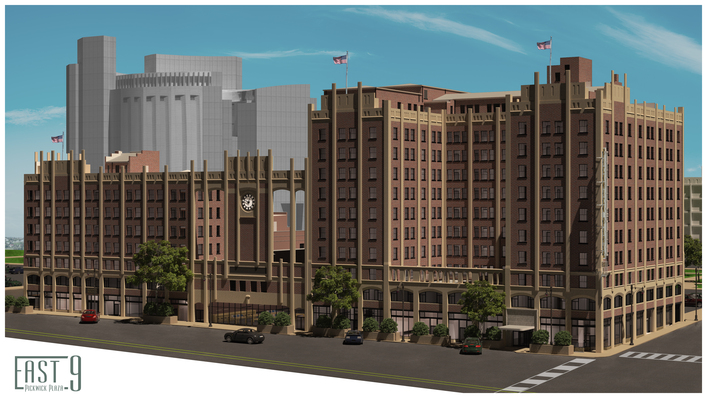 Situated at 933 McGee St., East 9 at Pickwick Plaza is located in close proximity to interstates 35, 70 and 670. Due to its location, the asset has attracted a diverse group of renters, many of whom are Millennials looking to move to downtown Kansas City.

The redevelopment of the former four buildings on the site needed 22 months of construction works. The original property included an 11-story hotel, originally built in 1930 and known for its popularity among presidents who visited the city, a former bus terminal, an office building and a parking garage. According to Yardi Matrix data, the new luxury building now features two apartment towers with 49 studios, ranging from 353 square feet to 597 square feet, as well as 171 one- and 39 two-bedroom units.

The lobby of East 9 at Pickwick Plaza is decorated with ornate chandeliers and sconces, designed and built by local artist Joe Munson, who also created the exterior blade sign and all commercial retail signage. More than 60 percent of the units are already leased. All apartments are expected to be fully leased by the end of 2017. According to the Kansas City Star, tenants of the commercial spaces include a UPS Store, City Gym and a restaurant and bar.

”UC Funds has been extremely active in Kansas City and many other urban downtowns throughout the country, bringing millennials together to ‘live, work, and play’. This asset is likely to spur increased development in its growing corner of the city,” said UC Funds Chief Credit Officer Jeremy Ross in a prepared statement.

Commercial Lending to Hold Steady in 2022 Amidst Higher Rates, Economic...