Greenwich Group Outlines $1.5B Financing Strategy for DC’s The Wharf

Even with quite specific preferences regarding both the debt and the equity financing for The Wharf, in D.C., Greenwich Group International reportedly has numerous entities potentially interested in getting in on the $1.5 billion, 27-acre, 3.2 million-square-foot mixed-use riverfront development. 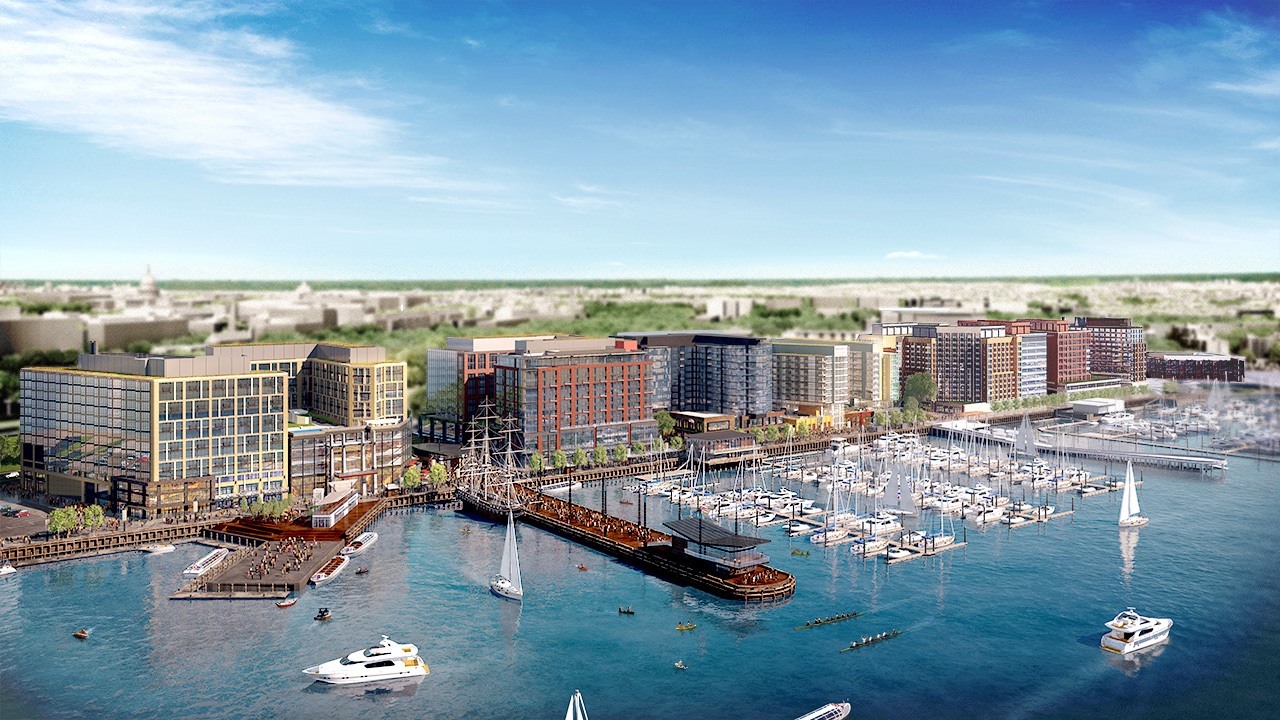 Even with quite specific preferences regarding both the debt and the equity financing for The Wharf, in Washington, D.C., Greenwich Group International reportedly has numerous entities potentially interested in getting in on the $1.5 billion, 27-acre, 3.2 million-square-foot mixed-use riverfront development.

Last Wednesday, the project’s developers, Hoffman-Madison Waterfront, a joint venture of Madison Marquette and PN Hoffman, announced that Greenwich will be arranging financing for The Wharf.

The project, which is slated to begin construction next year, runs for nearly a mile along the northeast shore of the Washington Channel, in the national capital’s Southwest/Waterfront district and only a few blocks south of the National Mall.

When completed in roughly eight to 10 years, The Wharf will include more than 1,350 residential units, 960,000 square feet of office space, three hotels totaling 680 rooms and 358,000 square feet of retail space, as well as a concert venue, public parks, community spaces and a 13,000-square-foot artisanal food market. On the channel itself, The Wharf will feature four new public piers that will provide access to water taxis and ferry services, 450 boat slips, and dinner and tourist cruise ships and will also host tall ships and maritime exhibitions.

Phase I is scheduled for completion in 2016 and will include rental apartments, 134 condominium residences, three hotels and significant office, retail and convention space.

Though each phase will entail about $500 million in debt financing, Muller said, “given the timing involved (more than seven years), it is unlikely that a loan that is committed to today would be for both phases. It is likely, however that the lender(s) involved in the financing of the first phase may get some sort of preference for Phase II.”

Regarding the equity, however, he said, “the opposite is likely true.” Noting that both Madison Marquette and PN Hoffman are headquartered in Washington and have long ties to the area, Muller said, “it is their intention to stay invested in this deal for the long term, and an ideal equity partner would as well. The project phasing has been set up to optimize that long-term perspective, so on the equity side, an investor coming in today would be coming into the entire project.”

And due to the project’s eight- to 10-year horizon, Muller added, “any investor coming into the deal will have to bring that same long-term perspective.”

Given the site’s very rare waterfront location, proximity to the center of D.C. and other factors, he said, “we are actually seeing interest from a very broad base of potential investors, many of whom are not the typical ones one would imagine.”

Though Muller noted that a syndicate of traditional construction lenders is a definite possibility, he added, “We are currently in discussions with a number of debt sources, including the traditional construction lenders to form a syndicate, two CMBS lenders who have experience securitizing these types of large construction loans, as well as the traditional insurance companies (both domestic and foreign) who can provide either the whole loan or club it with a partner or two. Additionally, we are in discussions with a few of the large overseas banks and sovereign wealth funds to provide either one-stop shopping for the entire capital amount, or a portion thereof.”

“On the equity side,” he said, “we anticipate that one investor, or perhaps a club of two, comes into the deal.”

Muller expects that Greenwich can wrap up the financing by the end of the first quarter of next year, with construction starting thereafter.