A life insurance company will relocate to WTC's tallest tower in May 2023. 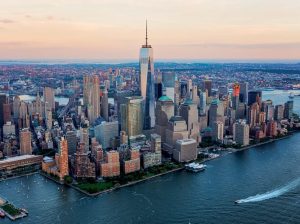 N.Y. Life Insurance Co. is relocating its offices from 120 Broadway to One World Trade Center in Manhattan. The mutual life insurance company has signed a 47,000-square-foot office sublease with Advance Magazine Publishers Inc., Condé Nast’s parent company, for the entire 39th floor. The move will take place in May 2023.

JLL Capital Markets worked with the landlords, The Port Authority of New York and New Jersey and The Durst Organization, to arrange the 10-year contract. Eric Engelhardt, senior vice president with Durst, helped facilitate the transaction on behalf of the ownership.

Another lease transaction closed recently in the campus, as law firm Freshfields signed with Silverstein Properties for 180,000 square feet of office space at 3 World Trade Center.

The tallest building in the World Trade Center complex

The tower’s biggest tenant is Condé Nast, with a footprint of 1.2 million square feet; of the total, 400,000 square feet were put on the market for subleasing last year. The roster also features the U.S. General Services Administration, Studio71 and Vogue, among many others.