Chad Phillips on the trends shaping the sector at a time of rising borrowing costs and economic volatility. 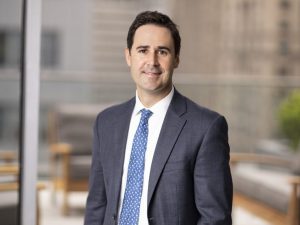 Even though a growing number of office tenants begin to see the benefits of in-person work, office investors are still very cautious when deploying capital. The current economic environment is pushing a growing number of investors toward alternative office assets, which tend to be more resilient.

With $151 billion assets under management, Nuveen is one of the largest real estate investment managers in the world. The company’s Global Head of Office Chad Phillips believes that a successful office investment strategy today means choosing the right assets in the right markets. Nuveen is currently focusing on new office assets in established markets, medical office buildings and life science properties.

Commercial Property Executive asked Phillips to discuss the trends he sees in the market, and also expand on his company’s office investment strategy.

READ ALSO: MBA’s Take on the Future of Office Demand

What are some of the trends that are driving office investment today?

Phillips: Across all asset classes, the Fed’s aggressive monetary policy this year has contributed to a dislocation in pricing across all asset classes. Combined with the uncertainty facing the office sector due to persistent working from home, we’ve seen a large gap between buyers’ and sellers’ expectations since March. Given the lack of pricing clarity, transaction activity has fallen off over the past six months.

Other factors affecting commercial real estate investment include the “denominator effect” and the strengthening dollar against other currencies. Private real estate values have held up much better than stocks, bonds and public REITs and, as a result, many institutions find themselves overweight private real estate based solely on the shrinking values for those other asset classes. This has led some investors to pull back for now even if they maintain strong convictions in our sector.

A strengthening dollar makes U.S. real estate look expensive to foreign buyers. But this works both ways. Historically, commercial real estate investment has been a good way to gain exposure to the dollar as a hedge against your home currency. Additionally, long-term prospects for growth look better in the U.S. than in most other developed nations, so we expect foreign interest to return sooner rather than later.

How would office investment look like in a future recession, considering current fundamentals?

Phillips: The pandemic recession was unlike anything we’ve seen but the downturn for knowledge workers was short-lived. One positive thing for the office market has been how well office-using sectors not only held up but increased employment above and, in some cases, well above their previous peak levels. So, the good news is that if we do go into a recession, we’re starting from a relatively strong position in terms of the labor market. The bad news is that office jobs do tend to be cyclical and we would expect some pullback in sectors like finance and tech if we do enter a recession that was caused primarily by rising interest rates.

Over the longer term, the U.S. will continue its shift toward a knowledge-based economy and that will benefit office demand. The share of the population with degrees has been rising steadily for decades and, more recently, we’ve seen a sharp uptick in the share of those degrees in STEM fields. This will benefit not only the traditional office market but also those alternative office sectors I mentioned.

Name some factors that investors should pay attention to in the coming 12 months, given the high level of inflation.

Phillips: Real estate is generally considered one of the better inflation hedges out there for investors given the built-in rent escalations on most leases. Additionally, expiring leases tend to roll into prevailing market rates. However, runaway inflation isn’t good for anyone. Rising costs impact both our operating and capital expenses. While we can pass through most of the operating expenses to tenants, it can put some pressure on our ability to increase base rents.

On the capital expenses side, construction costs have been tracking above inflation for a very long time now. Labor shortages and supply chain backlogs certainly don’t help alleviate these conditions. Investors should pay attention to these trends and to underlying inputs like energy prices, which contribute to rising costs.

Tell us about vacancy rates in the U.S. office sector. Where are we still seeing low vacancies?

Phillips: We’ve seen the most resiliency among newer assets and especially those located in vibrant, urban, mixed-use neighborhoods… At a market level, vacancy is still elevated across the country. The major Florida markets have held up particularly well. Migration from expensive coastal markets is largely driving that, particularly in South Florida.

What office investment strategy do you believe is best going forward?

Phillips: It’s a stock picker’s market. As a portfolio manager, no longer can you just allocate a percentage to the sector and hope for the best. While there’s no denying the strong headwinds for office, there are plenty of opportunities as well. For traditional office investment, we’re focused on newer, boutique-sized assets in established markets, especially in CBD-adjacent neighborhoods with a critical mass of residential and retail development that creates a vibrancy that attracts office workers and serves as an additional amenity for office assets.

In terms of the building itself, it needs to be amenity-rich to compete. Tenants are increasingly focused on good ESG practices and many are using their real estate to achieve this. A sustainable design with a low carbon footprint, abundant natural light, high ceilings, and outdoor space are all popular with tenants today.

What are the main markets Nuveen is focusing on when it comes to office investment?

Phillips: We target cities that we believe are best positioned for demographic and structural growth because assets in those markets are more likely to generate resilient and durable income through market cycles. Sunbelt markets have outperformed recently and we expect that trend to continue in the near term, but we also believe in the resiliency of gateway markets over the longer term. Ultimately, it comes down to choosing not only the right markets but the right neighborhoods and assets within those markets as well to be successful.

For example, in Chicago—where that market has really struggled recently—we’ve seen some great individual success stories in the Fulton Market neighborhood. Charlotte’s South End is another example of this trend only in a market with a brighter outlook. This once underutilized industrial area adjacent to Uptown is now home to over 13,000 apartment units, 10 million square feet of office space, and a plethora of retail, dining and nightlife options for its residents and workers.

Phillips: While this was a trend for us prior to the pandemic, we are increasingly focused on themes around health care and technology. Nuveen is one of the largest investors in life science real estate, which falls under the office umbrella, and though we’ve seen some pullback in terms of private funding this year, we are big believers in this sector going forward given the unprecedented aging of the population that is currently underway. The sheer size of this cohort will not only provide robust demand for new therapies and treatments, but it will also put political pressure on both sides of the aisle to expand funding for medical research.

Along the same lines, we believe medical office buildings represent a huge opportunity. This sector tends to be a steady, income-driven investment and we believe the U.S. is undersupplied given this aging population, which spends far more on medical care than the working-age population.

We generally look for opportunities where there are compelling demand drivers but also supply constraints and clustering effects that create natural barriers to entry. For example, sound and film recording studios have been gaining interest among institutional investors and we believe this sector has similar characteristics to life science real estate in the attributes I mentioned.

What are some of your predictions for real estate investment and the office market in the next quarters? Do you expect any major changes?

Phillips: Many legacy core open-end funds are overweight office and will be looking to redeploy that capital into other sectors. There are plenty of opportunistic investors out there waiting patiently for bargains and you will probably see more trading along those lines in 2023. But the reality is that there is very little distress currently in the market. Office buildings generally have longer leases that are well-laddered and tenants, by and large, have stayed current on their rent despite low attendance rates, so we aren’t expecting a rush to the exits by sellers either.

The market should regain pricing clarity and, in turn, volume once there is a consensus on the interest rate outlook. The upshot is that this will create better buying opportunities for the next round of investments. A lower cost basis will attract buyers, and acquisitions made early in cycles tend to outperform late-cycle vintages.