The joint venture partners have completed the $900 million refinancing of the Midtown Manhattan office tower. 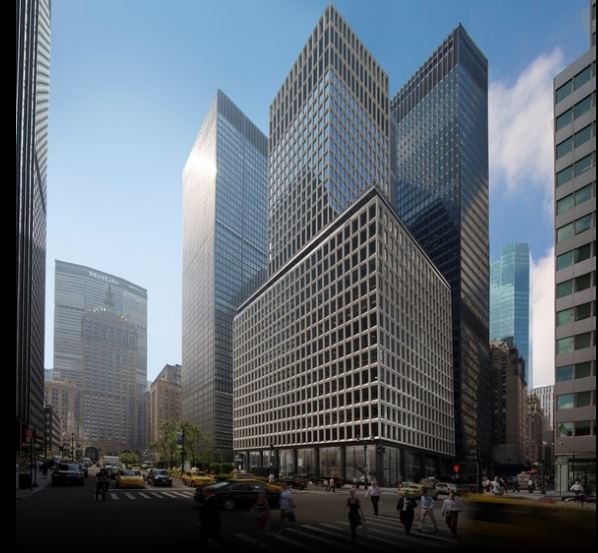 The new three-year loan has four one-year extension options and carries a floating interest rate of LIBOR plus 2 percent (currently 2.44 percent), according to a joint news release. The loan replaces the previous $721 million debt that had an interest rate of approximately 6.35 percent.

The two REITS formed a joint venture in 2011 to buy the office tower, built in 1968 and located in Manhattan’s Plaza District between 48th and 49th streets, for just under $500 million. They undertook a massive redesign of the property, making changes to the exterior and interior planned by Kohn Pederson Fox. The interior changes included adding a new lobby with 25-foot-high ceilings that extends the full block-front of Park Avenue. An atrium with a reflecting pool and floor-to-ceiling glass bridge connects the two-tower complex. State-of-the-art security was added along with new elevators and other infrastructure and common area upgrades, including new bathrooms. Outside, the building’s adjacent plaza was redesigned to add green space and floor-to-ceiling glass was added to the façade. Retail space now has two floors with entrances on both 48th and 49th streets.

Over the past three years, SL Green and VNO have leased up most of the building, which has access to Grand Central Terminal’s Northwest Passage. Most of the tenants are in the financial industry, including Blue Mountain Capital and Promontory Financial Group LLC, which signed leases totaling nearly 100,000 square feet in early 2013. Last year, The Real Deal reported Medley Capital leased 22,000 square feet and two existing tenants–PJT Partners and Harvest Partners–expanded their space. At that time, rents were reported to be about $120 per square foot, but apparently increased competition from newer office towers being constructed in Hudson Yards and elsewhere in Manhattan have depressed rents in Midtown, according to The New York Times. In late March, 280 Park Ave. was one of the properties the Times highlighted in a story about older office properties that were lowering rents.

Steven Durels, an executive vice president at SL Green, told the Times they would “throttle it back” to “meet the market.” He said the building had a vacancy rate of 12 percent compared to over 55 percent in 2011 when SL Green and VNO bought their stakes.

Those numbers are consistent with first quarter 2016 market reports like JLL’s Office Outlook report for New York that cited an 11.6 percent vacancy rate for Midtown offices. The JLL report noted vacancy rates had steadily increased for the previous six months from a low of 9.8 percent in September. Average Midtown Class A office rents were $81.09 for Q1, according to JLL.