Vornado Pops Up in Metro DC

The company has converted a segment of The Bartlett into a pop-up hotel just in time for Inauguration Day. 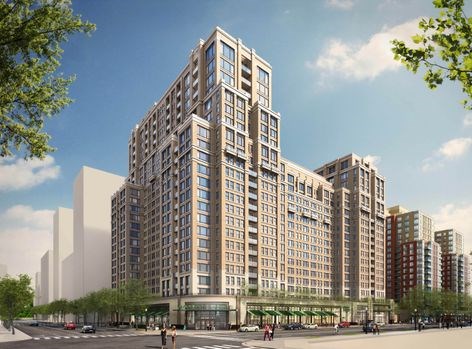 Washington—Vornado Realty Trust plans to spur a sea change in the multifamily market, starting with its new 699-unit The Bartlett luxury apartment community, just outside Washington, D.C., in Arlington, Va. Through its WhyHotel platform, the REIT has transformed a segment of The Bartlett into a pop-up hotel, and D-day for the endeavor is the very timely date of January 13, 2017, according to The Washington Post.

“Our first 50-unit pilot goes live in the Washington, D.C., metro area in January 2017, just in time for the U.S. Presidential Inauguration,” Vornado notes on the WhyHotel website.

It was in 2013 when Vornado obtained the Arlington County Board’s approval for development of The Bartlett, which stands at 520 12th St. South in the Pentagon City area and holds the distinction of being the largest residential high-rise in Arlington County. And in June 2016, the doors of the $250 million property swung open to tenants for the first time, offering premier living accommodations and more than 40,000 square feet of coveted indoor and outdoor amenity space, as well as a Metro-centric location that places the building within 15 minutes of downtown D.C. But the 22-story, Maurice Walters Architect-designed tower’s debut to an eager population of renters was just part of the plan.

In September 2016, Vornado filed for an amendment to the Pentagon City Phased Development Site Plan, requesting permission to temporarily convert 50 of The Bartlett’s unleased apartment units from residential to hotel use. The Arlington County Planning Commission held a public hearing on the proposal in November, after which the agency recommended that the Arlington County Board sign-off on the request. And following another public hearing on December 10, the Board did just that, giving Vornado the final approval to open WhyHotel at The Bartlett.

The WhyHotel concept, however, is not just about providing guest lodging in a high-demand market. As reported in the Post article: “The idea of WhyHotel is to find a new way to generate money from existing spaces. (Director of strategic projects for Vornado, Jason) Fudin described the effort as a pilot project for Vornado, to experiment with ‘how we can most efficiently use our capital investment’ as the apartment building fills with traditional renters.” As for apartment occupancy at The Bartlett, during Vornado’s third quarter earnings call on November 1, company CFO Stephen Theriot boasted that since the opening of the rental office in June, the leasing pace had been “running at an incredible 60 units per month.”

Hotel accommodations at The Bartlett range from one- to three-bedroom furnished suites, but according to Vornado’s agreement with the Arlington County Board, they’ll only be available for a two-year period ending December 31, 2018. Eventually, WhyHotel will operate various pop-up hotels offering 50 to 200 rooms in newly constructed luxury apartment properties, per the platform’s website.