Top Financiers on What Keeps Them Up at Night

Despite transactional and political uncertainty in the first half of 2017, the commercial real estate capital markets held strong, with plenty of capital and solid lending competition creating a robust financing environment for borrowers across all sectors.

Despite transactional and political uncertainty in the first half of 2017, the commercial real estate capital markets held strong, with plenty of capital and solid lending competition creating a robust financing environment for borrowers across all sectors. But will concerns over interest rates and a wavering cycle temper activity for the rest of the year? Top lenders and brokers weigh in. 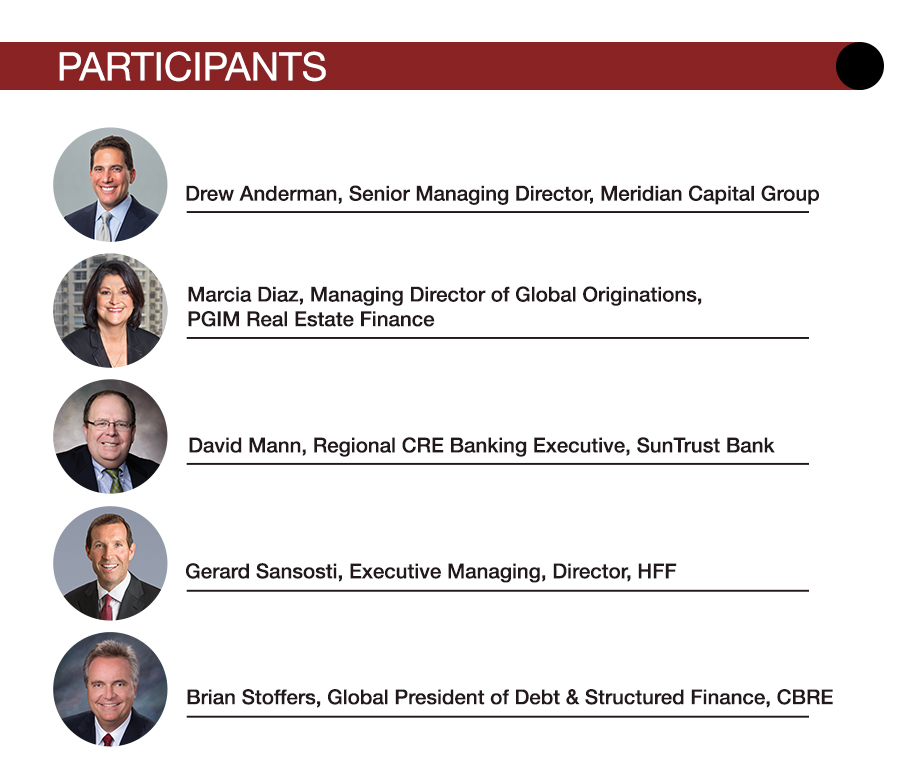 What does it take for a project to get financed today?

STOFFERS: There is ample capital available for most types of financing, from a wide variety of sources. For the longer-term, institutional or conservative borrower, their best bet is life insurance companies. Multifamily with Class B, affordable or green components can turn toward the GSEs. For higher-levered debt requests, secondary cities or large loans, CMBS is on fire again.

ANDERMAN: Many lenders who were most active over the past three to five years are still playing a major role today, albeit with modified underwriting adjusted to account for property appreciation and the ability of investors to grow rents in the future. Non-bank lenders—debt funds and private lenders—are becoming more active in making long-term first mortgages, a business in which they have traditionally not been involved.

DIAZ: Portfolio lenders, in general, are looking for well-capitalized borrowers who are experts in what they do. If you have a stabilized asset, you can name your price, and those deals are aggressively bid upon. But even going up the capital stack, there is plenty of money available for properties with higher leverage, with disruption in cash flow, or undergoing a lease-up or renovation play.

SANSOSTI: Well-established borrowers with long track records can still go to their banks and get financing. Regulations have made it more challenging, but if they have sufficient equity and well designed and capitalized projects, there are financing sources for the project. Borrowers who don’t have the same longstanding track records are looking at alternative lending sources, such as private capital and debt funds. The equity requirement is still vital, especially if you’re looking to borrow in less traditional areas, such as construction financing.

ANDERMAN: Construction financing is deal by deal and is still available for well-planned projects with experienced sponsorship and substantial equity going into the capital stack.

ANDERMAN: Multifamily remains the most favored, given the strong economic fundamentals and high cost to buy in many areas.

DIAZ: With agencies running against caps and dealing with regulations like green and affordable, portfolio lenders have seen opportunities to capture more multifamily than ever before.

SANSOSTI: Multifamily, which had been on the top, is now being approached with some caution because of the amount of supply added in certain markets.

STOFFERS: Industrial is the new multifamily, loved by both lenders and investors. There’s a good supply-demand equilibrium, with low vacancies, (and) many e-commerce platforms are taking goods away from retail stores and putting them into last-mile facilities.

DIAZ: Last year, it was hard to get industrial done, as there were not a lot of transactions. There are more this year, and since the sector is a lender favorite, the deals are competitively bid.

What is your outlook on the cost of capital and terms?

STOFFERS: We’ve seen the yield curve flatten considerably. The 10-year Treasury dropped to 215 basis points recently, while shorter-term rates and LIBOR have risen in lockstep. Spreads have tightened plus or minus 30 basis points. So it’s an attractive time to be a borrower, as the lending environment is quite competitive.

SANSOSTI: Borrowing costs are very low right now, and my feeling is that there is nothing out there that will cause that to change over the rest of the year, barring any political and global issues.

DIAZ: Although Treasuries have been fluctuating and coupons have stayed flat, we don’t foresee anything dramatic happening through the end of the year. There’s been a lot more competition, so we’ve been using pre-payment flexibility to differentiate ourselves—and now some competitors are doing so. Underwriting terms, even amidst this competition, have been disciplined.

ANDERMAN: Spreads will vary in response to rates and market conditions, but we expect rates to remain steady and gradually increase. Loan terms should also remain conservative but stable.

MANN: Most banks have increased pricing on construction loans due to point-in-cycle concerns and increased capital costs associated with high-volatility commercial real estate.

What are you watching regarding the impact of the Federal reserve’s interest-rate policy?

STOFFERS: We believe that the Fed will raise rates one more time this year, and what happens on the global scene and in D.C. will dictate what happens with 10-year rates. However, we don’t think they will move significantly up or down by the end of the year.

MANN: We are watching the pace of future interest-rate increases and the correlating impact on long-term rates, cap rates and values. We recognize that rates remain at the low end of the historic spectrum and that moderate interest-rate increases reflect a strengthening economy. In addition to moderate rate increases, the Fed has signaled it will begin downsizing its balance sheet this fall by letting maturing Treasuries run off. We expect this could also impact rates, as this will reduce demand for long-term securities.

DIAZ: Concerns surrounding the Fed’s interest-rate policy have been priced into the market. We’re acting as if it’s business as usual and don’t anticipate any sort of shock.

ANDERMAN: The financing we negotiate is not tied in lockstep to the federal funds rate. Despite several increases this year, we have not seen interest rates rise sharply. We carefully monitor all market forces and lenders’ appetites to ensure that we are completely on top of any changes in real time to best service our clients.

SANSOSTI: I’m watching shorter-term rates, as borrowers need to think about the spread between fixed- and floating-rate loans.

What about the capital markets outlook keeps you up at night or makes you excited to jump out of bed?

DIAZ: We are now deep in another cycle, and although I can’t anticipate what, something big will happen. Everything looks great and fundamentals are strong, but we know nothing goes on forever. So we’re trying to partner with people who are able to manage a disruption and running every downside scenario before putting money out.

STOFFERS: We’re at a unique point in time when we’re not seeing terrible overbuilding, there’s ample capital and there isn’t overly aggressive lending. While our industry has experienced a lot of wild swings, we’re now at a good point in the cycle, despite being in a late stage. I don’t see a cliff ahead of us.

ANDERMAN: When a market is moving and dynamic, it creates more opportunity for brokers. Borrowers rely on our advice to an even greater degree to understand and identify their best options and ultimately to navigate to a successful closing.

SANSOSTI: People in our business should jump out of bed when there are low interest rates, strong fundamentals and liquidity, but another side of me is concerned about the amount of liquidity in the market. Too much liquidity can cause pricing to become more aggressive, and people must take more risk as a buyer or lender because of that competition. However, it doesn’t feel like 2006 or 2007.

Has anything surprised you about 2017 so far?

MANN: The Mortgage Bankers Association recently reported that the volume of new commercial real estate mortgages originated year-to-date is lower than originally projected. This appears tied to the fact that overall commercial property purchases and sales volume are lower compared to the prior year. I would also note that buyer competition to purchase non-stabilized properties has abated from prior years. (However), I feel there is a lot of momentum in the sales market for all commercial real estate, especially industrial and multifamily.

DIAZ: When you think about how strong 2007 was, 2017 should have been a big year for 10-year loans coming due. So it surprises me how slow it’s been. Despite that, we’re on target to reach our $8 billion goal this year for portfolio lending. However, I do wonder what’s in store for the second half.

SANSOSTI: Many investors who were looking to be sellers are now deciding to refinance instead, which tells me there’s still a gap (between the bid and ask) on the sale side. I expected 2017 to be strong, but I thought we would see a stronger investment sales market and more acquisition financing. Maybe we will see more of it in the second half.

ANDERMAN: The impact of technological change on our industry, and also some of the hyperbole in some of the pessimistic predictions. If one believed every dire prediction out there, it would seem impossible to obtain financing for a retail property. That is simply not the case.

STOFFERS: The political climate—given Republican control of the executive branch and House, I thought we’d see more progress by now. But we haven’t, and that’s disappointing. As a result, questions still exist relative to GSE reform, tax reform and a number of other issues that could have a profound impact on commercial and multifamily ownership and financing.