Growing investor interest in flex space is among the highlights of this month’s update from CommercialEdge. 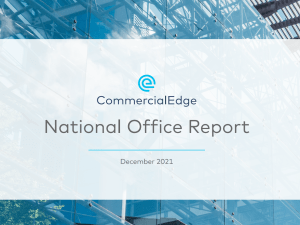 Since the onset of the pandemic, remote working prompted space users to reevaluate their office footprints. However, businesses still need physical space where their employees can collaborate—and flex space has become a popular short- and long-term solution, at lower real estate costs than a traditional lease. Investors are seizing the opportunity, too—A CBRE survey revealed that 86 percent of 77 global companies will include flex space as part of their real estate strategies going forward—but probably operating different revenue models than before COVID-19.

The office-using sector added 101,000 new jobs in November, up 4.1 percent year-over-year. Office-using employment continues to rebound from pandemic lows; As of November, the sector had 162,000 fewer jobs than in February 2020, with the information sector lagging by 123,000 jobs than it did before the pandemic. Only 37 of the 120 markets covered by CommercialEdge had more office-using employees than in February 2020.