Development of the first building in a two-building modular residential project at the Fort Sam Houston army base in San Antonio, Tex., has just reached completion. 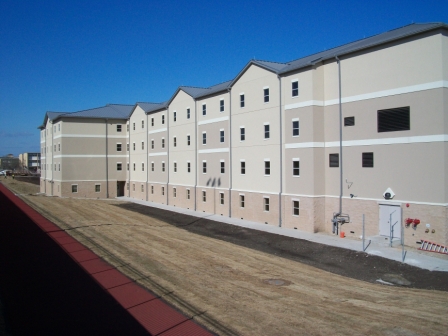 Development of the first building in a two-building modular residential project at the Fort Sam Houston army base in San Antonio, Tex., has just reached completion. A team involving general and sub-contractors Hensel Phelps Construction Co. and the Warrior Group and homebuilder Trendsetter Construction are in possession of the $140 million contract from the U.S. Army Corps of Engineers, and will ultimately erect a total of 1,200 “hotel-style” modular apartment units to accommodate 2,400 medical trainees.

The housing accommodations are one segment of the military’s new Medical Education Training Campus (METC), which is being developed as part of the 2005 Base Realignment and Closure Act. Building One is a four-story structure encompassing 600 apartments on three floors above a single level of classroom and administration space. Trendsetter, which is spearheading the project’s design, assembled 250,000 square feet of modular units at its facility in Belton, Tex., before transporting them to Fort Sam. The structure combines factory-developed modular components with traditional shell and concrete construction.

Modular housing, be it for the military, students or private residents, has its advantages. It’s all about cost-efficiency, an issue that couldn’t be more relevant given the current economic climate.

“This type of construction allows for a speedier and more accurate construction, saving both time and money,” Gail Warrior-Lawrence, president of Warrior Group, noted in a prepared statement.

The process can generate a 40 to 50 percent decrease in onsite activity compared to typical construction techniques. “It gives owners more control over their site operations and timetables for work completion,” Doug Henriquez, Trendsetter’s Director of Business Development, told CPE. “The sooner you have an apartment or dormitory complex open, the sooner you can collect revenues. And modular construction allows a higher rate of inspection in the construction process than typical site build. Effectively, the plant becomes your construction site, and your supervisors can inspect 100% of the work as the modules are built.”

Additionally, as a sign of the times, the modular development at Fort Sam adheres to U.S. Anti-Terrorism/Force Protection requirements.

Building Two, which will also feature 600 two-bedroom units to accommodate 1,200 medical trainees, is on schedule to deliver late this spring.