With nearly 350 million square feet underway across the U.S. at the end of February, CommercialEdge highlights the largest current developments.

Industrial real estate has shown its strength in recent years—particularly since the onset of the COVID-19 pandemic, which rapidly accelerated the growth of e-commerce, propelling demand for distribution space to new heights. With vacancies at historic lows, developers have sprung into action: Nearly 42 million square feet of industrial projects delivered in January and February this year, according to CommercialEdge data, following 284.4 million square feet completed in 2020. Momentum hasn’t stopped, either—at the end of February, industrial developments totaling nearly 346.6 million square feet were underway.

Though many industrial users have ambitious expansion plans in progress—The Home Depot continues to move forward with a national, $1.2 billion supply chain initiative, for example—none have matched the size and scope of Amazon’s growth. The e-commerce behemoth dominates our list below, which utilizes data from CommercialEdge to highlight the 10 largest industrial projects under construction across the country. Amazon is involved in nine, but the sheer scale of the company’s expansion becomes clearer through a wider lens: Looking at industrial developments underway of more than 1 million square feet, Amazon either owns or has fully preleased 45.4 percent. 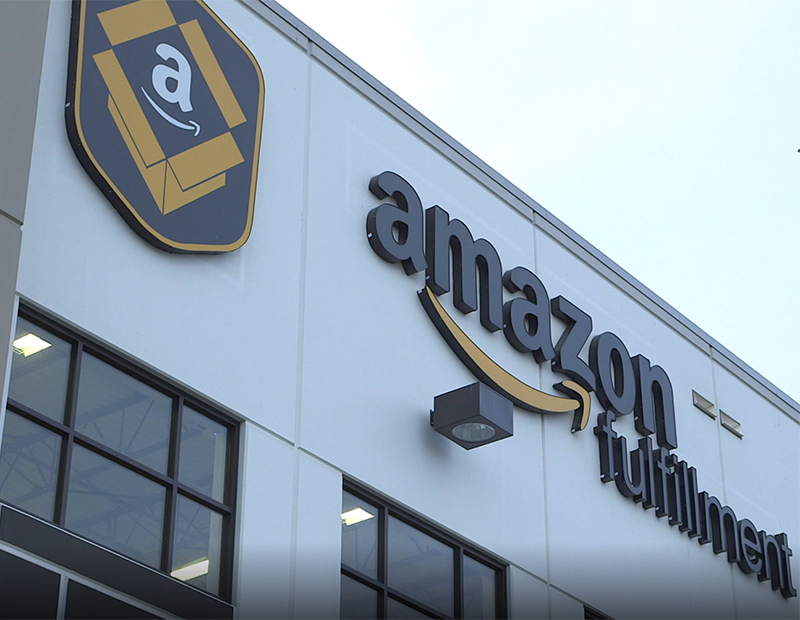 USAA Real Estate’s 2.8 million-square-foot facility at 219 Madison County Parkway is one of the only industrial projects underway in the wider Jackson, Miss., metro area. The development—Amazon’s third Mississippi fulfillment center—broke ground last summer and is slated for completion late in the third quarter. The four-story property will be equipped with 59 dock-high loading doors and two drive-in doors.

Located less than 2 miles from the Otay Mesa border crossing into Tijuana, Mexico, Amazon’s 3.4 million-square-foot Project Arcilla broke ground in mid-2020. Developer Seefried Industrial Properties plans to have the five-story project wrapped up by this summer. While its the largest in the metro, the fulfillment center is only one of the e-commerce giant’s several locations in the San Diego area—in January, Ryan Cos. and DWS Group delivered a nearly 550,000-square-foot property in Poway, Calif., also for Amazon. 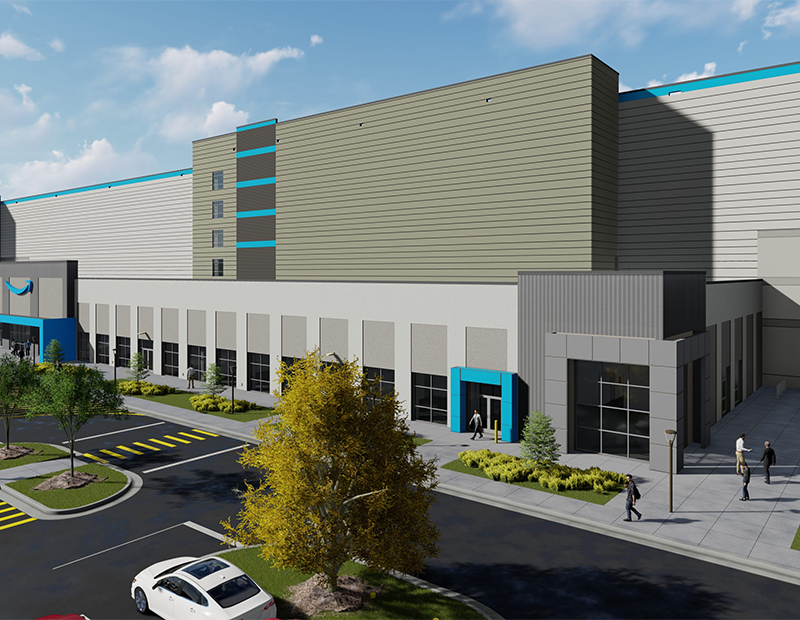 Announced in July 2020, Amazon’s 3.6 million-square-foot center in Mt. Juliet, Tenn., is expected to deliver before summer, eventually bringing some 1,000 jobs to the Nashville suburb. The development marks Amazon’s seventh distribution facility in the state—with an eighth planned to kick off outside Knoxville in 2022.

A joint venture between Hillwood and The Sterling Group is behind Amazon’s 3.8 million-square-foot distribution center at the former site of the Michigan State Fairgrounds, north of central Detroit. The $400 million property is one of five under development in the metro. Work on the project began near the start of 2021 and delivery is slated for the first half of 2022.

Amazon is building its presence in the Hampton Roads market with two new facilities. The largest—a 3.8 million-square-foot multistory processing facility in Suffolk, Va.—broke ground in mid-2020, with construction expected to wrap up this summer. The $200 million, robotics-assisted fulfillment center will mark the largest industrial building in the state. Seefried Industrial Properties is the developer and The Conlan Co. is the general contractor.

Slated to deliver this fall, Amazon’s five-story, 3.8 million-square-foot development near Syracuse, N.Y., is well underway, having broken ground last spring. Trammell Crow is the developer of the $350 million project taking shape on 111 acres, previously occupied by a golf course and country club.

Work on the last of Amazon’s four 3.8 million-square-foot fulfillment centers on our list began in the first half of 2020 in the Austin suburb of Pflugerville, Texas. Initially named Project Charm, the $250 million development will create an estimated 1,000 jobs over 10 years, though much of the day-to-day operations will be conducted by robotic systems within approximately 3 million square feet of mezzanine space. Developer Seefried Industrial Properties expects to complete construction by the end of the summer.

3. LogistiCenter at I-95 Wilmington in Wilmington, Del. 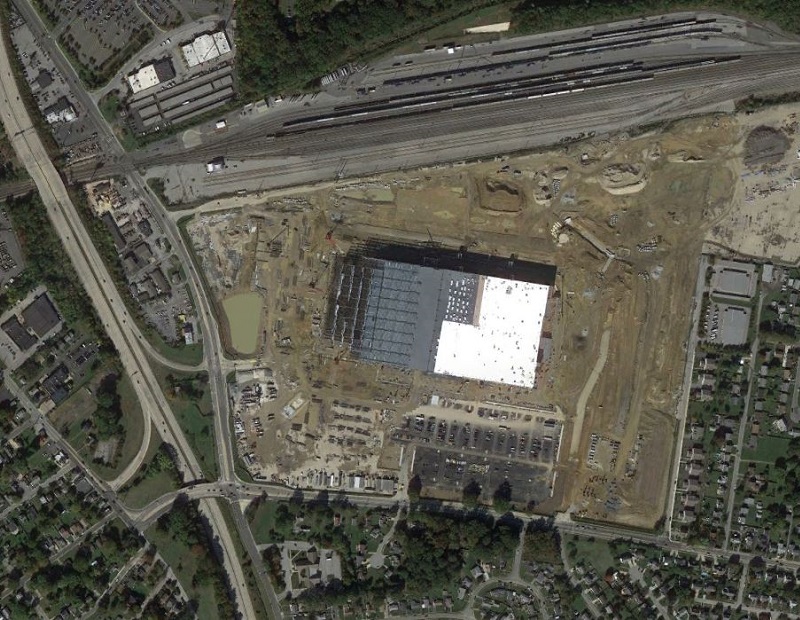 Dermody Properties began work last summer on another Amazon facility, this time in Wilmington, Del., on the former site of a General Motors manufacturing site that shuttered operations in 2009. The building, at 801 Boxwood Road, will have a footprint of 820,000 square feet and include four mezzanine stories. The structure will contain more than 3.8 million square feet once complete this summer.

Amazon’s largest distribution center nationwide is underway near the airport in Colorado Springs, Colo. The 4 million-square-foot project’s cost is pegged at close to $370 million and is slated to deliver this summer. Located at 4222 Integration Loop, the facility will serve as a hub for shipments of smaller items—from books to electronics—to the city of Colorado Springs and to the wider region.

The sole project on our list unaffiliated with Amazon, Tesla’s 4 million-square-foot Giga Texas facility in Austin, is taking shape at 12733 Harold Green Road. The $1.1 billion development began last summer, and completion is slated for this winter. The automotive manufacturer plans to assemble its semi, Model 3, Model Y and Cybertruck vehicles at the facility, which could employ up to 5,000 workers. 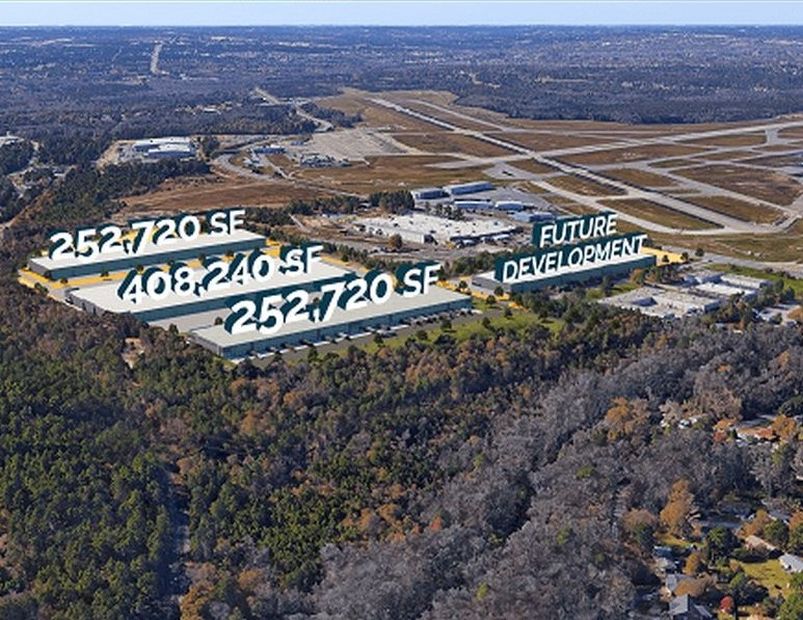