Fundraising among non-traded REITs is at its lowest level in more than 13 years, and it’s likely to drop even lower this year. The expected total of $4.5 billion is potentially the lowest since the $6 billion raised in 2005, according to figures from Summit Investment Research. 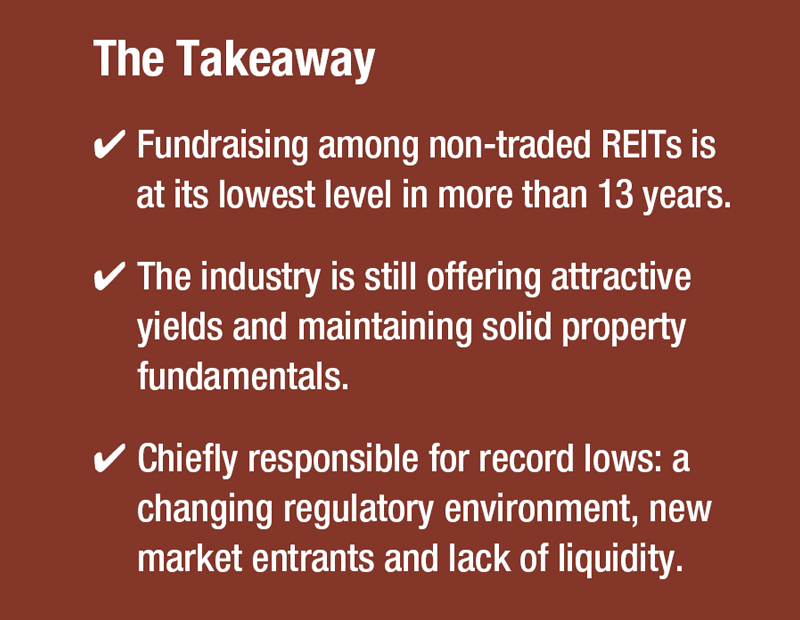 Fundraising among non-traded REITs is at its lowest level in more than 13 years, and it’s likely to drop even lower this year. The expected total of $4.5 billion is potentially the lowest since the $6 billion raised in 2005, according to figures from Summit Investment Research. Historical capital raises peaked at $20 billion in 2013, dropping to a mere $4.8 billion last year.

Yet unlike the past dip, which was impacted by plummeting commercial real estate prices and the recession, the industry is still offering attractive yields and maintaining solid property fundamentals. Three factors are chiefly responsible for these record lows, experts say:

The same year, the (DOL) also issued final rules expanding the definition of “investment advice fiduciary” under the Employee Retirement Income Security Act of 1974, automatically defining any financial professionals who work with retirement plans or provide retirement planning advice as a fiduciary. But in February, President Donald Trump directed the DOL to re-examine the rule, delaying implementation.

“The broker-dealer networks pumped the brakes on sales until they had a chance to digest the potential impact these new rules would have on their customers,” explained Ernst & Young partner Chris Johnston.

The regulatory changes have scared off some advisors, which are focusing on non-traded REIT products that fall outside FINRA 15-20, noted Summit president Michael Stubben. And until the DOL Fiduciary Rule is fully implemented and requirements understood, it will also continue to impact fundraising.

“Will it be enforced, changed or pushed back?” he asked. “Until then, the sponsors of non-traded REITs have uncertainty around the appropriate fee structures for non-listed REIT products.”

However, an increase in fiduciary responsibility is helpful in general, noted CapStack Partners CEO David Blatt. It gives investors a comfort level that their advisor is properly screening investment opportunities such as non-traded REITs. That sense of protection, along with an increased appetite for specialized alternative investments, sets up a growth environment for non-traded REITs, he said.

New Entrants to the Market

Overall, non-traded REITs remain a good vehicle for high-net-worth investors to gain access to commercial real estate, which is performing better than the bond and stock markets, pointed out JLL Income Property Trust president & CEO C. Allan Swaringen. There has been particular appetite for those diversified across property types and geographies, while non-traded REITs focused on single property types are seeing reduced capital flows.

JLL Income Property Trust, for one, had been overweighted toward grocery-anchored retail and warehouses, and has been rapidly expanding apartments as a share of its $2.5 billion portfolio.

“We have high-net-worth investors and our goal is to pay regular dividends. Apartments have the best fundamentals and values right now,” Swaringen said.

The non-traded REIT industry has also recently seen some consolidation, with even some industry stalwarts—like W.P. Carey Inc.—choosing to exit, he continued. Inversely, more companies with long histories and track records, like JLL Income Property Trust and Blackstone, are entering. They have been followed by new users and distribution partners, including a greater presence of broker-dealers.

“As more institutional players come into this space, some of the legacy players will no longer be able to compete or go through additional consolidation,” he added.

Another change has been the introduction of crowdfunding, initially the realm of smaller institutions seeking to raise equity.

“Matching real estate investors directly to non-traded REIT crowdfunding platforms cuts out the middle man, which changes the amount of commissions and fees the non-traded REITs have historically charged,” Johnston pointed out. “Crowdfunding could be a viable source of new capital raise in the non-traded REIT industry while simultaneously putting some downward pressure on the traditional sales commission-based models.”

An Overall Lack of Liquidity 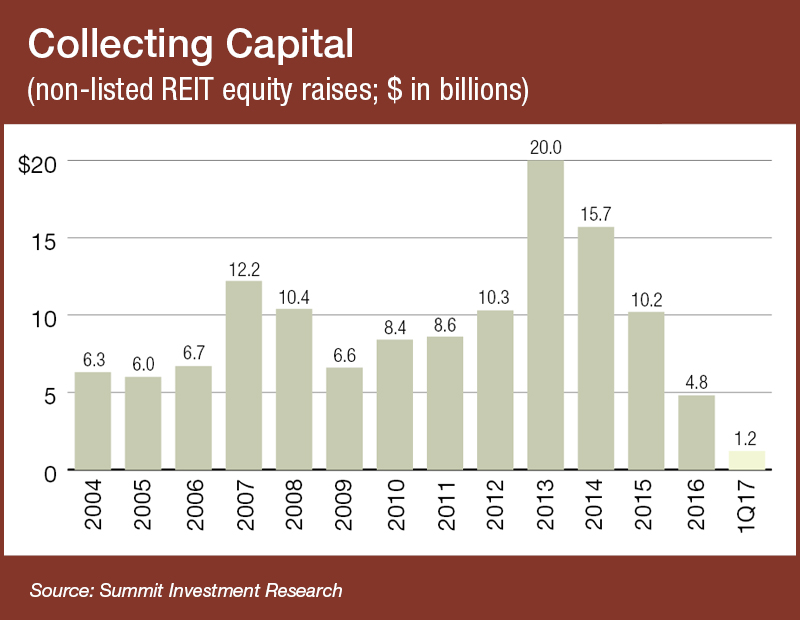 Lack of liquidity is also hurting fundraising. Investors typically have a five- to seven-year hold expectation, Stubben said, and less reason to sell in the current climate. But investors want money back to reinvest.

“(This) highlights a significant conflict of interest between sponsors, who want to collect management fees, and investors, who want liquidity events,” he noted.

Stubben said investors experienced some capital losses during two sizable liquidations this year: those of CNL Lifestyle Properties Inc. and Hines Real Estate Investment Trust Inc. “Overall, we expect much less IPO activity this year, as sponsors hold onto assets under management to collect fees while they wait for a rebound in fundraising,” he said.

There was a post-recession IPO uptick as newer funds bought assets at rock-bottom prices, Goodwin noted. As prices recovered, sponsors listed their funds at a premium for their investors with an IPO. Now, asset values are not rising as fast, leading to a slowdown in activity. And the values for traded REITs have dropped dramatically in some sectors, which combined with the costs associated with IPOs will further dampen such events.

The jury is still out on whether a fundraising uptick is finally on the horizon. But given investors’ increasing interest in private and direct investment in real estate, Blatt said, an extension of broader interest in alternate investments will help drive growth.

Originally appearing in the September 2017 issue of CPE.