Physical workspaces are vital, but 61 percent of tenants are likely to reassess their space needs, according to a major new study by BOMA International, Yardi Systems and Brightline Strategies. 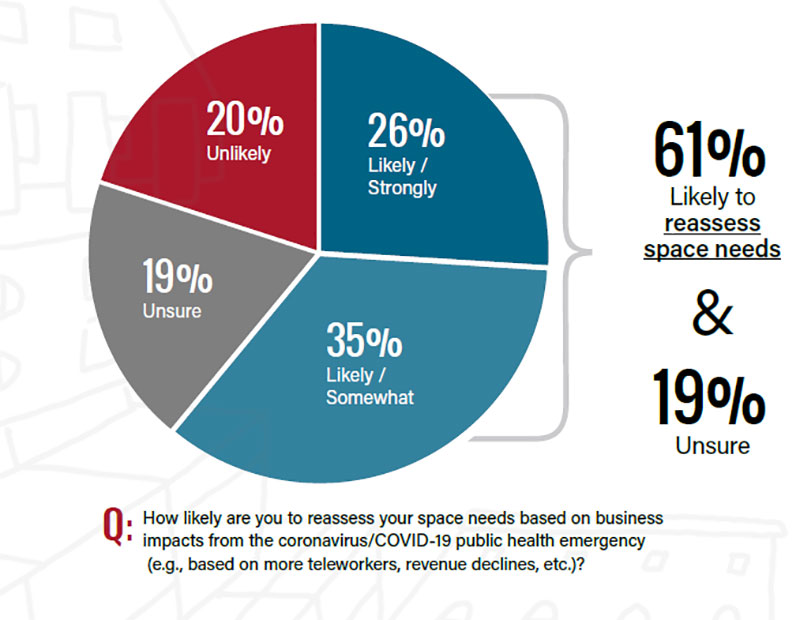 Nearly three-quarters of office tenants believe that in-person workspaces are vital to operating their businesses, but many are reassessing their space needs, according to a major new survey tracking the impact of the pandemic on office decision-makers across the country.

Commissioned by the Building Owners and Managers Association (BOMA) International, underwritten by Yardi Systems Inc. and developed by Brightline Strategies, the COVID-19 Commercial Real Estate Impact study flags the widespread economic challenges faced by office users, but also the way that many building owners and operators have successfully adapted and met their tenants’ expectations during the crisis.

“The demand for office space, generally speaking, is still pretty strong, even amid this global pandemic,” said Michael Broder, president & CEO of Brightline Strategies, a research and advisory firm focused on the real estate industry, in an interview with Commercial Property Executive.

But the data collected by the survey, which canvassed more than 3,000 office space decision-makers and influencers from August through October, suggests that there will be significant changes in the form and function of office environments, he added. “And that is everything from how people utilize their space to how people calculate their space needs and what the true purpose of an office environment will be going forward,” Broder said.

Among the key findings of the survey, 74 percent of tenants—rising to 77 percent of C-suite/owner respondents—believe that their in-person office space is vital to conducting a successful business or operation. Sixty-five percent of respondents said that they are personally comfortable with or supportive of returning to the office, but only 59 percent believe that their employees or colleagues feel the same way—an intriguing gap that hints at psychological projection. 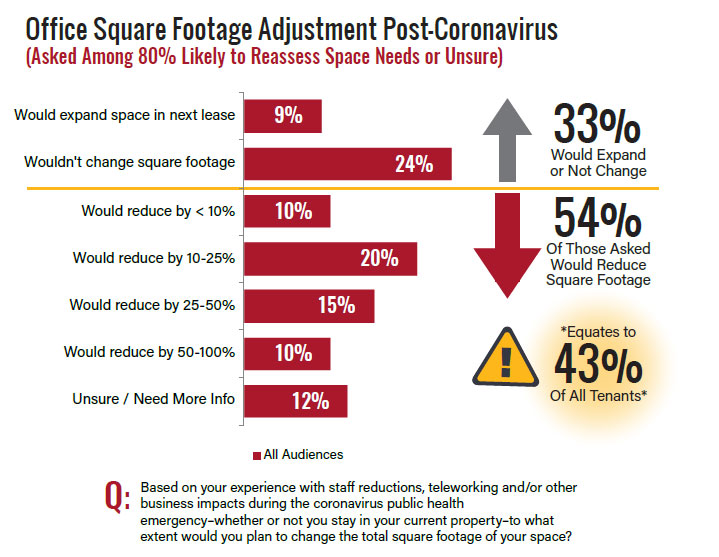 Financial hardship is a prime driver of these considerations. According to the survey, 47 percent of tenants have struggled to pay office rent on time or meet their lease terms or believe this could be an issue going forward. Nearly half are at risk of not meeting payroll requirements.

“The writing is on the wall that there very well could be a reduced amount of space required by the existing customer base of commercial office,” he said. In that case, Teel added, vacated floors could potentially be filled with conference rooms or coworking operations as an amenity for existing tenants.

Scaling down, mixing it up

According to the survey, 53 percent of tenants have had serious negotiations with their landlords about scaling down their office space or are considering such talks. Forty percent are shifting or may shift square footage to coworking or work-share environments like WeWork, Industrious and Regus.

On a positive note, about 8 in 10 tenants approve of the coronavirus response implemented by their office landlords and operators, and nearly half said they would be more likely to renew based exclusively on that response. 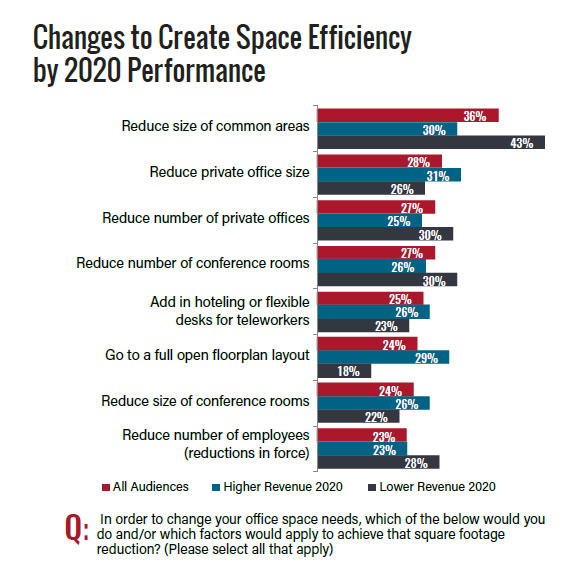 Adjustments on the table to achieve space efficiency and safety include curbing the size of common areas and the number of conference rooms and private offices. Larger tenants tend to focus on concepts such as open-plan layouts and hoteling desks, while smaller firms show more interest in common area reductions.

“People are going to want to build in more flexibility in the future,” noted Henry Chamberlain, president & COO of BOMA International, citing space adjustments, how teams operate and whether staff will come in on a rotating schedule as possible adaptations. Companies are also looking at the hub-and-spoke model, consisting of a main office and a network of decentralized, smaller offices.

“Technology has proven we can work from home,” he added. “It’s not the same, and it’s not as collaborative and creative, but it works.”