Co-Founder & CEO, Co-Founder & President, Fundrise What Others Say About Them: “Dan Miller and Ben Miller are smart and sophisticated,” said Jacob Sacks, co-founder & principal of Cayuga Capital Management. “We have done several transactions with their new Fundrise platform, and they delivered what they promised and beat our expectations in terms of how […] 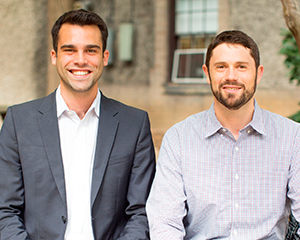 What Others Say About Them: “Dan Miller and Ben Miller are smart and sophisticated,” said Jacob Sacks, co-founder & principal of Cayuga Capital Management. “We have done several transactions with their new Fundrise platform, and they delivered what they promised and beat our expectations in terms of how well the execution went. There will be many players in the online funding for real estate space, but what will separate the winners from the losers will be their market knowledge, capital network and ability to execute, and Fundrise is at the head of the pack.”

Most Proud Of: “My brother and I were the first people ever to sell shares of real estate on the Internet,” Ben said. The Millers launched online real estate crowdfunding platform Fundrise in 2012, giving anyone with as little as $100 the opportunity to purchase securities representing ownership shares in local real estate endeavors, from new developments to renovations. They both cite their very first crowdfunded project, the rehabilitation and leasing of a small retail building in Northeast Washington, D.C.’s budding H Street Corridor, as their most memorable achievement. Fundrise raised a total of $325,000 for the project through 175 investor contributions. But the nearly year-long endeavor of gaining approval from the Securities and Exchange Commission was also an accomplishment.

Secrets to Success: “Every city we go to, we’re the first to do (real estate crowdfunding), and there’s a lot of determination, focus and passion they see,” Dan said. Fundrise has raised—or is in the process of raising—financing for projects from coast to coast. The list includes projects ranging from Revolve’s 32-unit apartment development at 1315 E. Jefferson in Seattle, for which $1 million of preferred equity was raised, to Manhattan’s 3 World Trade Center, where Fundrise is allowing individual investors to buy into a trust backed by bonds sold to finance the construction of the 2.5 million-square-foot office skyscraper. The company expects to expand to more than 10 cities and 25 markets in the U.S. by the end of 2015. Europe is on the agenda for 2016. Greatest Challenges: “There’s a lot of ‘new’ in crowdfunding, and in the real estate industry, ‘new’ does not adapt that quickly,” Dan said. “That’s our biggest difficulty: people hearing about it the first time.” Best Advice Received: Dan got his best recommendation from watching their father, Herbert Miller, founder of Washington, D.C.-area real estate company Western Development Corp., and co-developer of the wildly successful Gallery Place mixed-use development in downtown D.C. “I do remember being with my father when he started developing Gallery Place; just seeing that determination and focus and creating something out of nothing,” Dan recalled. Ben took careful note of words from Jim Cannon, former Domestic Policy Advisor to President Gerald Ford. Recounted Ben: “Focus on the process, not the content. The content will change, but a good process—good people, culture and systems—builds on itself.” Advice to Others: “Pick a career you’re incredibly passionate about,” Dan said. “If it’s not something you’re thinking about in your free time, someone else is.” —Barbra Murray CPE selected 17 individuals and teams as the 2015 Stars to Watch. Details on their accomplishments appear in the February 2015 issue.