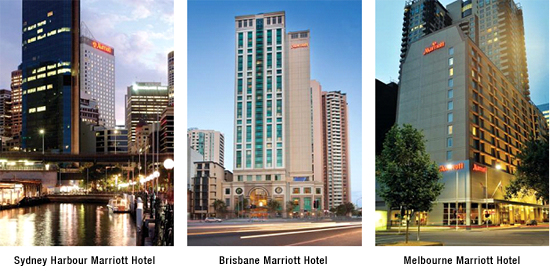 Starhill, a listed Malaysian REIT, has closed on an A$415 million acquisition of three premier Australian hotel properties: Sydney Harbour Marriott Hotel, Brisbane Marriott Hotel and Melbourne Marriott Hotel. Totaling 1,106 rooms, the portfolio represents Starhill’s first acquisition in Australia. Global law firm Baker & McKenzie advised Starhill on the deal that made the REIT the largest overseas portfolio owner in Malaysia. More than half of the company’s property value is now made up of hotel properties in Australia and Japan.

Starhill entered the deal to purchase the hotel and all of their business assets from previous owners  Commonwealth Managed Investments Limited, 30 Pitt Street Pty Limited, 515 Queen Street Pty Limited and Lonex Pty Limited in mid-June 2012, according to a press release. The purchase price of A$415 million was determined based on independent assessments made by Colliers International Consultancy and Valuation Pty Limited. Payment will be made in cash through a combination of bank borrowings and cash balances. According to a press release, the purchase is the largest hotel portfolio acquisition by value in Australia.

Corrs Chambers Werstgarth acted for the vendor. The law firm is present in Australia’s major cities and has partnerships across the APAC region.

Similarly to the other properties in the portfolio, the 186-room five-star Melbourne Marriott Hotel also boasts an AAA tourism rating. The 16-level property is located in Melbourne CBD at the intersection of Exhibition and Lonsdale Streets. Amenities include 4,650 square feet of meeting space, six meeting rooms, the Melbourne Marriott Fitness Center, indoor atrium pool and whirlpool. Dining options include Essence on Exhibition with its modern Australian cuisine, international cuisine Elements and the Espresso Bar.

The properties are operated by global hotel operator and franchisor Marriott International, Inc.