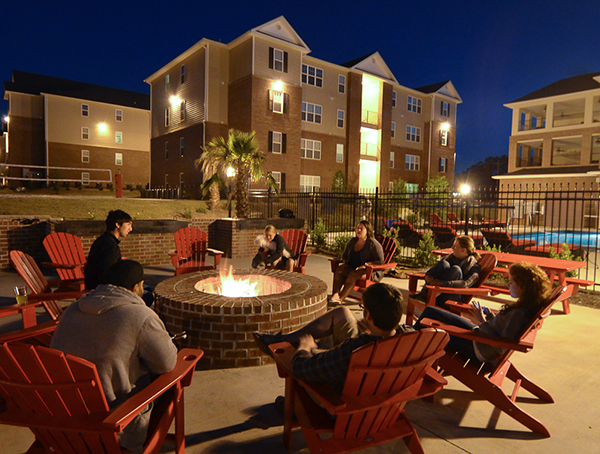 Campus Crest Communities provided valuable insight on trends impacting the student housing industry earlier this week at its 2012 Investor Day held in the NYSE board room. The company also shined some light on its strategy for success since its October 2010 IPO, when the Campus Crest joined American Campus Communities and EdR in the student housing REIT arena. While the firm is still the new kid on the block, the sheer demand for purpose-built, off-campus student housing is a recipe for continued portfolio growth.

The meeting opened with a presentation by Michael Gallis, principal at Michael Gallis & Associates, a strategic planning and design firm. Gallis’ research presented a very bullish case on the drivers behind student housing demand, pointing out there are 13.5 million students currently enrolled in four year undergraduate programs at large public institutions, which is 62.6 percent of all four year enrollments. Of those 13.5 million only 34 percent (or about 4.35 million) live on campus. That leaves 68 percent, or 9.16 million, living off-campus. When Gallis factors in the existing purpose-built student housing stock, the number of students renting off-campus single housing, and the number of students living at home with their parents, he finds a supply gap of approximately 1.5 to 2.15 million beds. That is good news for student housing developers.

“We believe the market is going to see continued demand,” Gallis said. “Especially once you factor in population growth, enrollment growth due to the recession and the economic benefits of a degree becoming more apparent.”

Other factors pointing to a strengthening market is upwards trends in international students studying in the U.S., a market segment that dipped after 9/11. The disparity in cost between private and public institutions in another reason why Gallis expects public university enrollment to increase, pointing out that only 3.7 percent of public university students have defaulted on loans. Another interesting trend that Gallis’ group discovered was that non-flagship state schools were seeing a more pronounced enrollment boost, perhaps a result of students looking to specialize in technical education or other practical fields.

“Individual campus markets will vary significantly, and that is going to be more of a market strategy issue,” said Gallis.

One thing is certain though, Gallis added, is that supply is not poised to meet demand anytime soon. By 2022 he predicts a student housing deficiency between 2 and 2.65 million beds without factoring in for new development. But the trio of student housing REITs is delivering about 15,000 beds a year. Twenty or so private developers are delivering about 30,000 beds a year. Gallis rounds these numbers up to 50,000 beds a year. Over the next 10 years that equates to 500,000 new beds, which brings the demand gap to between 1.5 and 2.15 million beds, the same staggering figure the industry currently benefits from.

“The purpose-built student housing market is going to see growth because the pent up demand is so large, even with our conservative estimates,” Gallis said. “We think it is an embryonic segment that is still finding its place in the market place and growing. And market saturation is nowhere in sight.”

Campus Crest is aware of this deficiency and is currently on a roll identifying target markets and breaking ground. The company currently has 6 projects under development across the country, which will bring their total portfolio to 45 properties when complete.

“We look at enrollment, enrollment growth, the percentage of students living on campus, the percentage living off campus, the percentage receiving financial aid, etcetera,” Hartnett said. “We are going to these universities after they pass our litmus test of a possible location and we shop the bookstore. We look at how it is merchandized and marketed. Do they just have notebooks and pencils in there? Or is it like University of Wyoming, which was a big surprise, where they have a Clinique makeup counter and a whole Lacoste section. These are signals that kids have disposable income.”

Once Hartnett and his team have identified a new market, they hand off the torch to their regional development partners who scour off the zone around campus, literally driving around in concentric circles looking for sites that are not even necessarily for sale. In fact, 90 percent of the sites the firm has purchased were done so off market. Old strip retail and fields are prime candidates for development.

“The next step is to find out who owns the thing,” Hartnett added. “Our developers and I have gone to a lot of people’s living rooms and have had bad coffee and petted a lot of ugly dogs trying to convince people to sell their sites. That is what we do. It is a hands on—boots on the ground—method. And I think that is what has driven the strength of our pipeline.”