SL Green Realty’s planned office tower across the street from Grand Central Terminal is one step closer to coming to fruition. 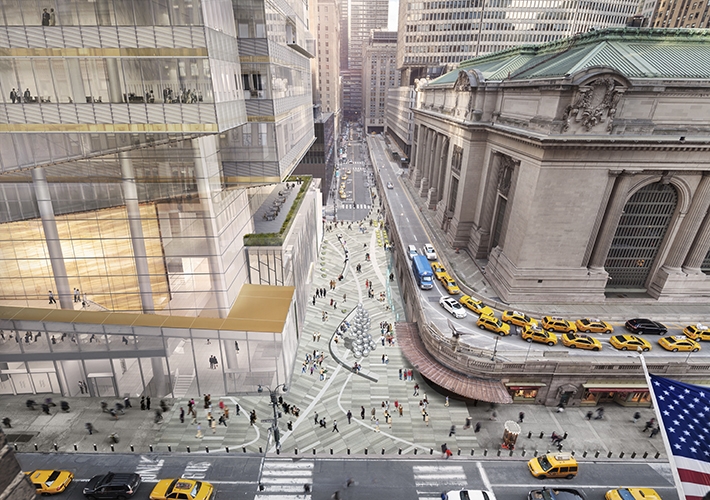 SL Green Realty’s planned 63-story office tower across the street from Grand Central Terminal looks like it’s on the way to final approvals along with proposed rezoning of the Vanderbilt Corridor thanks to a deal worked out with New York City officials that call for the developer to make $220 million in transit improvements.

“It is time to unlock the economic development potential in East Midtown,” Councilman Daniel Garodnick said in a news release. “The area has gotten stuck in outdated rules, and has lost some of its competitiveness over time. That is going to change today, starting with the Vanderbilt Corridor – where we will open the door to additional density in exchange for much needed improvements to our transit system. We have struck a much better deal for the public, and we will start seeing real benefits to Grand Central in the near term, even before a single new building is occupied.”

Original reports of the agreement in September had SL Green expected to pay about $210 million in improvements in order to secure a deal with the city.

Garodnick, who had opposed former Mayor Michael Bloomberg’s proposal for a more widespread East Midtown rezoning in 2013 because it lacked details, lobbied for additional public improvements to the Vanderbilt Corridor plan and SL Green’s proposal. He made his comments Tuesday along with various city, state and labor leaders and Marc Holliday, CEO of SL Green. The group held a joint press conference in front of City Hall, where the City Council Zoning subcommittee voted to back the developer’s plan to build One Vanderbilt, a 1,500-foot-tall, 1.6 million-square-foot skyscraper, and the proposed Vanderbilt Corridor rezoning. The rezoning would allow developers to seek special permits to construct bigger and taller buildings along Vanderbilt Avenue between E. 42nd and E. 47th streets if they make public improvements in the area. It will also allow for area landmarks to transfer unused development rights.

Both plans are expected to receive an OK from a Land-Use Committee this week and final approvals from the City Planning Commission and City Council later this month. SL Green expects to complete the tower in 2020.

In a move that is being called “unprecedented,” SL Green agreed to pay $220 million in transit and critical infrastructure improvements including construction of two transit halls, public restrooms and better access between the Long Island Rail Road, which will be connected to Grand Central Terminal as part of the East Side Access project, and the Lexington Avenue subway lines. SL Green agreed to give up valuable retail ground-floor space on 42nd Street to build the second transit hall at the base of One Vanderbilt. Other improvements will result in “22 percent more subgrade circulation space for commuters to move around underground from level to level,” according to the city press release.

Holliday, in prepared remarks, said the agreement would ensure East Midtown’s role as the “world’s most desirable central business district” and help it attract industry-leading companies to the area.

“By combining new state-of-the-art office space and an unprecedented $220 million in public improvements, this rezoning is a blueprint for building a truly 21st century central business district,” Holliday said in the statement.

City Councilman David Greenfield called it one of the most “innovative” partnerships in the city.

“In exchange for an increase in allowable floor area and height, New York City is receiving unprecedented transportation infrastructure upgrades to Grand Central Station and access to transit lines that will benefit millions of transit riders,” Greenfield said in the release. “This project will create good jobs, encourage more development and alleviate pedestrian traffic.”

Howard Grufferman, vice chairman, Colliers International, in Manhattan, said it was good that “the development is moving forward and bringing new life to a world-class location.”

“I think it is critical for all real estate owners to have new building in that area,” he told Commercial Property Executive.

Grufferman said requiring developers to pay for infrastructure improvements to construct large projects may be considered “an acceptable price to pay for entry.”

“SL Green has really pulled off a coup here,” he added, noting this is not a “prototypical deal” for SL Green, the city’s largest office landlord.

“It says a lot about their leadership and where they’re heading,” Grufferman said.

Grufferman acknowledged there is still office space to fill in Lower Manhattan and will be in the Hudson Yards district on the Far West side, but anticipates tenants will be attracted to One Vanderbilt as well. SL Green has already announced one major tenant. TD Bank signed a long-term lease for approximately 200,000 square feet to become an anchor office and retail tenant at One Vanderbilt.