Skanska USA is building a new 645,800-square-foot medical specialty building on the Stamford Hospital campus in Stamford, Conn., at a cost of $149 million. 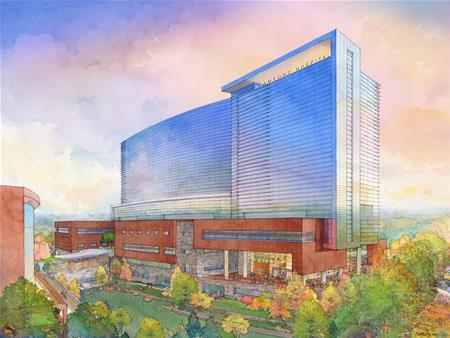 Skanska USA has landed a big contract with a big price tag. The development and construction company is building a new 645,800-square-foot medical specialty building on the Stamford Hospital campus in Stamford, Conn., at a cost of $149 million.

With the implementation of the Affordable Care Act, change is undeniably afoot in healthcare real estate, and it appears to be positive change.

“There’s a huge amount of opportunity in the healthcare system overall and that has to do with not only the potential change coming through the ACA, but pent up demand and the aging of America,” Andrew Quirk, senior vice president & national director for Skanska’s Healthcare Center of Excellence, told Commercial Property Executive. “So it’s almost like a perfect storm on the real estate side for what’s coming in the system.”

Skanska’s work at Stamford Hospital involves the development of a new 12-story building that will replace a bevy of existing on-site facilities, some of which date back to the early 1900s. It’s the type of activity that healthcare real estate experts expect to see much more of in the coming years. As Lorie Damon, managing director with Cassidy Turley, told CPE, a great segment of the country’s hospitals were built in the ‘50s and ‘60s, and now many are challenged to support new technologies. The result: the building of replacement hospitals. “More than anything else, the age of those assets may be driving development. In terms of how healthcare reform will impact this, I think it’s a little too early to tell,” Damon added.

Whether it’s to accommodate new medical technologies or to handle an influx of patients due to the aging population or healthcare reform, new hospital buildings are being built. Skanska is an eyewitness. “In the latter half of last quarter, we started to see a big increase in inquiries for RFQs RFPs, and right out of the gate in the first quarter we are seeing a ton of activity in the marketplace with RFPs, interviews and selections. It’s all really happening now,” Quirk added.

What’s also happening now, in many cases, is a general change in project size. Healthcare construction endeavors, Quirk observes, are getting larger. “Up until even last year, a big project was $80 million; now we’re seeing many jobs that are well over $150, $250 million and even bigger,” he said. The total development cost for the Stamford Hospital project is an estimated $450 million. Methodist Hospital in San Antonio announced plans for a $200 million expansion in December of last year.  Kaiser Permanente broke ground on a $900 million facility in the Kearny Mesa area of San Diego, Calif., just last month. “That’s a new thing,” Quirk continued. “And I think it just has to do with everyone waiting in the wings for a while and now, not that there’s complete clarity with the ACA and other things that are happening, but I think people are starting to see a little bit of a roadmap on where they need to go and what they need to do.”

Of course, healthcare real estate extends far beyond hospital buildings. Medical office buildings are in high demand and clinics and urgent care facilities are on the rise. And it’s happening across the U.S.  “As healthcare reform continues to impact change to how healthcare is delivered, we are seeing a race to the suburbs by hospital systems to extend the ‘capturement’ area to reach the newly insured and, based on the patient’s acuity, funnel them into their urban-based systems,” Brad Blankenship, managing director with Cassidy Turley, told CPE. “Although some of the larger systems continue to add beds while accomplishing this goal, many are opening stand-alone clinics and surgery centers to compete for these patients. Also, emergency department visits continue to increase and we are seeing new for-profit ER’s built quickly and existing systems retool and expand to meet the volume. Throughput efficiency and patient satisfaction has never been more important in this competitive healthcare environment.”

Skanska is on track to complete construction of the new Stamford Hospital medical building in spring 2016.