The development marks the largest single-phase, mixed-use project ever undertaken in Music City. 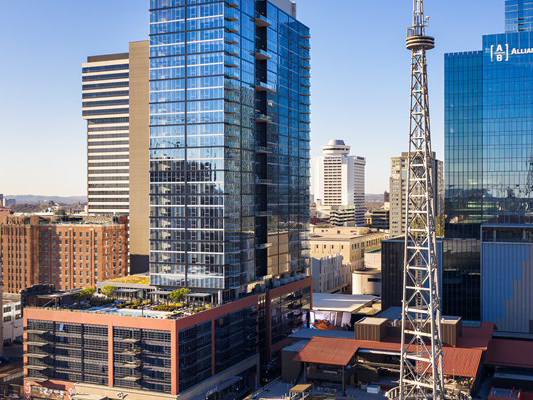 Nearly four years after breaking ground on the $450 million Fifth + Broadway—the largest single-phase, mixed-use project ever undertaken in Nashville, Tenn.,—Skanska USA has completed its work as general contractor at the 6.2-acre site in the city’s downtown.

In 2014, Skanska joined the project, located on the site of the former Nashville Convention Center, as it was in the planning phase with developers Brookfield Properties and OM-SE, a joint venture of OliverMcMillan and Spectrum | Emery Properties. The development was designed by Gresham Smith and Gensler.

Working on all components simultaneously, Skanska has now delivered The Place at Fifth + Broadway, a 415-foot, 386-unit apartment tower—the tallest multifamily rental property in Nashville—as well as 501 Commerce, a 24-story office tower with 372,000-square feet of Class A office space that will be the future headquarters of investment management firm AllianceBernstein; approximately 200,000 square feet of retail and entertainment space and the recently opened 56,000-square-foot National Museum of African American Music. The work included building multiple parking garages, with more than 2,000 spaces as well as renovating and expanding conference facilities.

Brookfield has recently announced that the retail component of the development will open on March 4, including the North Hall eateries, part of the Assembly Food Hall. In late spring, the South Hall eateries are expected to open along with a rooftop concert venue and full-service concept by Front Burner Society. Among the restaurants opening in March are Cava, Hattie B’s Hot Chicken, Slim & Husky’s, Shake Shack, Eddie V’s, The Twelve Thirty Club, Blanco Tacos + Tequila, Le Macaron and Boqueria. Retailers opening their doors soon include Nash Collection, Ray-Ban, Free People, Veseo Swimwear and Lingerie, Tecovas, Sephora and The Studio 208.

Fifth + Broadway was Skanska’s largest project in the state of Tennessee, where it has operated for more than 40 years. The firm used 7,000 workers, including 105 prime subcontractors and 61 small, minority-owned, women-owned and veteran subcontractors. Burgin Dossett, vice president, development at Brookfield Properties, said in a prepared statement that Skanska proved to be a strong partner in bringing the project to life. Calling Fifth + Broadway, a “truly transformational” project, Dossett noted the development process required demolition of an existing convention center and, within a single phase, the simultaneous transformation of an entire city block into a mixed-use destination.

Construction began in April 2017 with demolition of the Nashville Convention Center, a late-1980s building that became obsolete with the 2013 opening of the Music City Center. In March 2018, Skanska extended its contract with OM-SE as general contractor of the project. At that time, the development was beginning to take shape. Skanska and Brookfield Properties announced the topping out of the 34-story luxury apartment tower, The Place at Fifth + Broadway, in August 2019. The building, which has 17,000 square feet of amenities including a swimming pool, a recording studio, fitness facilities and multiple lounge and coworking spaces, was completed in the fall along with the office tower.