During the second half of 2017, the commercial real estate industry will face a far-reaching set of legislative and regulatory issues—some brand new, others perennial subjects of advocacy.

During the second half of 2017, the commercial and multifamily real estate industry will face a far-reaching set of legislative and regulatory issues—some brand new, others perennial subjects of advocacy. Tax reform, finance, e-commerce and flood insurance are all on the radar. Whether lawmakers and regulators will take action on these issues this year remains to be seen, but the organizations that represent the industry in Washington, D.C., find plenty of common ground. 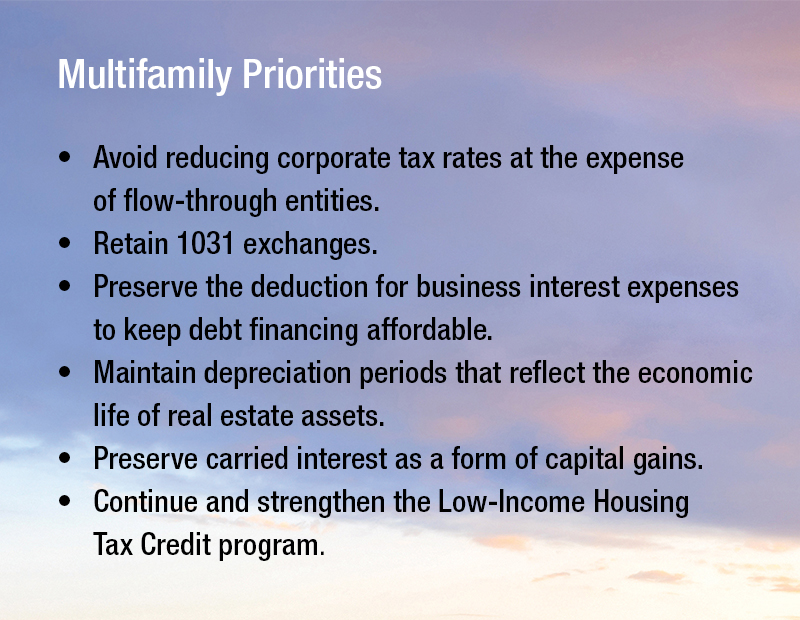 Tax reform is a top priority for both the White House and congressional leaders, and commercial real estate’s representatives support measures that will foster real estate investment and strengthen the economy. Yet industry advocates caution against well-meaning steps that lead to unintended consequences. “I was here in 1986, when they did the last tax reform bill, and it was devastating to the industry,” recalled Cindy Chetti, senior vice president of government affairs at the National Multifamily Housing Council. “We want to make sure it doesn’t happen again.”

Like other industry organizations, the International Council of Shopping Centers backs a reform package that will lower rates, simplify the tax code and promote growth, noted Stephanie Cegielski, an ICSC spokesperson.

“The last major tax reform in 1986 was the largest tax imposed on the real estate industry, and our main efforts are to ensure there are transition rules included, (that it) removes the inclusion of the BAT (Border Adjustment Tax), preserves interest deduction and discourages lengthening depreciation of a carried interest increase,” she said. ICSC contends that those steps would encourage development and innovation while generating revenue for state and municipal services.

Yet another tax-related issue on the radar is fairness for brick-and-mortar retailers. Tax exemptions for Internet purchases take on even more significance at a challenging time for retail real estate.

As Cegielski sums it up: “This disparity gives e-commerce retailers a government-sanctioned price advantage and causes an annual loss of $26 billion in uncollected state sales tax. A sale is a sale, regardless (of whether) the transaction takes place on Main Street or online.”

A pair of proposals, the Remote Transaction Parity Act and the Marketplace Fairness Act, would help restore a level playing field, according to ICSC. The organization continues to press lawmakers and the White House to address sales tax parity and other concerns, and “we remain hopeful for a positive outcome,” Cegielski said. 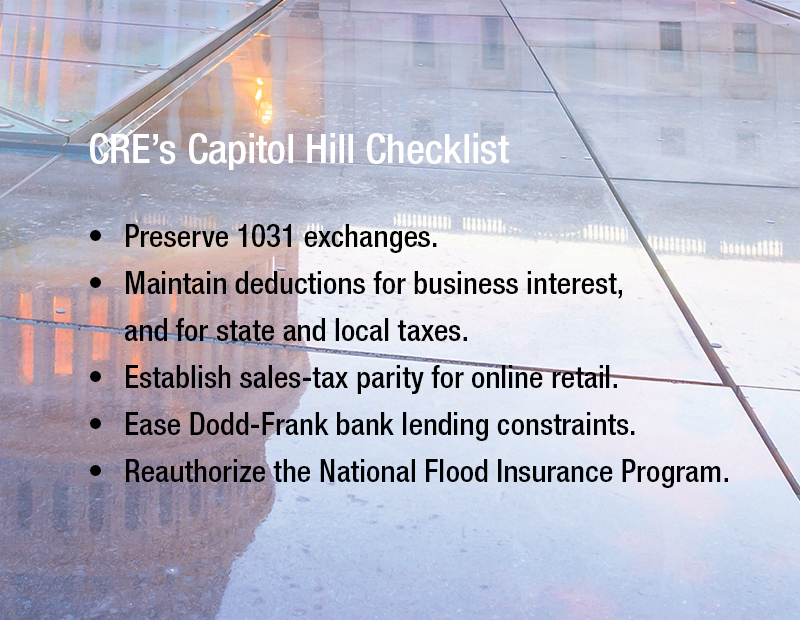 Regulations that hamper lending are the target of industry advocates, and the Financial Choice Act would help untie the hands of banks, argues Gerry Trainor, a Transwestern executive managing director who leads the firm’s investment sales and investment banking businesses in the Mid-Atlantic region.

“A lot of the bureaucracy and regulation imposed by the Obama administration would be removed,” he explained, naming the Volcker Rule and bank capital reserve requirements as examples. “You’ll see more transactions, more development and the freer flow of capital will be better for pricing in real estate, as well.”

Liquidity is also at issue in the long-running discussions about revamping Fannie Mae and Freddie Mac. During a July hearing held by the Senate Banking Committee, lawmakers expressed support for continued government guarantees.

“The existing multifamily programs at Fannie and Freddie, which performed well through the crisis and already involve meaningful risk-sharing with the private sector, should be preserved in some form as options in a future system,” noted the committee’s chairman, Sen. Mike Crapo (R-Idaho).

Another committee member, Sen. Thom Tills (R-N.C.), called the Low-Income Housing Tax Credit “very important. … It’s really the cost of entry for someone to build a multifamily unit. And it relates directly to a number of the zoning and regulatory hurdles within the very areas that we need more affordable housing.”

NMHC argues that it’s critical to maintain a federal guarantee for multifamily-backed mortgage securities. Structural changes must take into account the inherent risks of multifamily investment and retain the successful components of the government-sponsored enterprises.

Prospects for tackling makeovers of Fannie Mae and Freddie Mac this year remain cloudy, Chetti noted, “but if things get jammed up on tax reform, they might turn to GSE reform.”

One time-sensitive issue: the National Flood Insurance Program (NFIP), which expires in September and provides the only such coverage available to most multifamily investors. “We’re hoping for a long-term reauthorization,” Chetti said.