The company expects to build a 2 million-square-foot facility at the Inland Port Arizona industrial park. 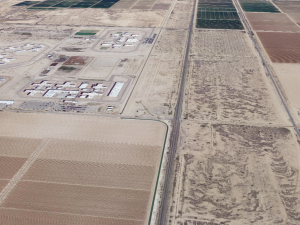 Procter & Gamble Co. has completed the acquisition of approximately 430 acres in Coolidge, Ariz., for the development of a new industrial property to support the consumer goods company’s portfolio of fabric care products, Phoenix Business Journal recently reported. The land purchase comes just two months after the Arizona Commerce Authority announced that P&G will invest $500 million to develop the 2 million-square-foot manufacturing facility in the suburban Phoenix city.

According to Pinal County records, P&G acquired the development site from Pinal Land Holdings LLC in a transaction valued at approximately $53.4 million. The acreage is located near Highway 87 and Arica Road within the 2,700-acre Inland Port Arizona industrial park, a rail-served mega site roughly 60 miles south of Phoenix. P&G’s selection of the metropolitan Phoenix site dovetails with current trends in industrial demand. According to a report by JLL, the Greater Phoenix area leads the country in industrial demand, with the call for industrial space having skyrocketed 56.6 percent from 2021 to 2022 due in no small part to the city’s population growth and proximity to the Ports of Los Angeles and Long Beach, among other factors.

P&G’s Coolidge project is in the early stages; however, the company has been making steady progress toward the realization of the facility. On December 7, 2022, the Pinal County Board of Supervisors approved a public roadway construction and participation agreement between the county and the city of Coolidge to accommodate P&G’s planned facility. If all goes as planned, P&G will commence development of the manufacturing plant later in 2023.

P&G’s planned facility in Coolidge is the latest of a handful of projects that have added to the Cincinnati-based company’s industrial real estate footprint. In March 2022, news emerged of P&G’s plans to expand its facility in Greensboro, N.C., by an additional 80,000 square feet via a $110 million investment. And just two months later, in May 2022, P&G revealed that it will build a 1 million-square-foot automated facility in Jackson, Ga., at a cost of $205 million.

As of June 30, 2022, P&G’s owned and operated portfolio of manufacturing properties totaled 23 facilities spanning 17 states in the U.S., and an additional 81 facilities in 35 other countries, according to the company’s fiscal year 2022 report. P&G expects the Coolidge location to be open and operational in 2025.