The $5 billion development has provided a boost to the nation’s ports, where vacancy rates for industrial space are at record lows and rents are climbing, according to a new JLL report that notes the majority of new construction will be at East Coast and West Coast seaports.

As the $5 billion expansion of the Panama Canal passed its one-year anniversary in late June, the industrial real estate market surrounding ports in the U.S. heated up with East Coast and Gulf Coast ports seeing the biggest boost, according to a new report from JLL.

The 2017 North American Seaport Outlook takes a closer look at the impact the Panama Canal expansion and other shipping industry issues have had on U.S. ports along with five trends impacting the ports and their surrounding real estate. Vacancy rates for industrial port-centric properties are at record lows. To meet the demand, about 25.4 million square feet of industrial space is under construction in the 14 markets JLL tracked for the report. About 65 percent of that development is in East and Gulf Coast ports, the report noted.

“While the West Coast still handles about half of all shipping volume, the East Coast is seeing significant growth. The trans-Pacific trade lane is the largest in the U.S. by overall volume, so West Coast ports are still in high demand. But little room to build distribution centers near these ports, coupled with pressure to move cargo from the first to the last mile, presents challenges for the future,” Walter Kemmsies, managing director, economist & chief strategist of JLL’s Port, Airport and Global Infrastructure (PAGI) group, said in a prepared statement.

Mid-Atlantic and Southeastern seaports have seen a 20 percent increase in shipping volumes compared to 5 percent on the West Coast. Kemmsies cited the expanded Panama Canal and increased trade with Asia among some of the reasons for the increased growth. 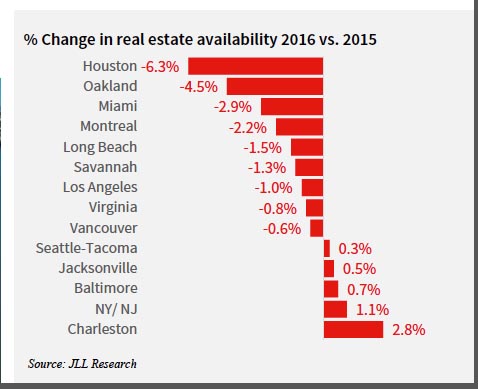 The report notes Gulf Coast ports are also winners in the trade wars, particularly Port Houston, which was the strongest port-centric industrial market in the U.S., averaging 2.3 million square feet of total net absorption over the past 10 years. Compared to the other PAGI markets, Houston showed the largest decline in year-over-year industrial availability, a 6.3 percent decrease. Overall asking rents are up by 36.5 percent since 2010, making it the second highest rent growth market after Oakland, where rents increased by 39.4 percent.

HFF cited Houston’s strong fundamentals and port access in the recent sale of industrial assets owned by TA Realty to ATCAP Partners. Two of the warehouse properties have access to the Port of Houston and Houston Ship Channel.

Among the ports seeing record high TEUs thanks in part to the Panama Canal expansion were the Southeast ports of Savannah, Ga., and Charleston, S.C., and the Mid-Atlantic ports of Baltimore and Virginia. Many of those ports have deepened or begun projects to deepen their channels to handle the bigger ships coming from Asia to the East Coast, including the Port of Miami, which spent $1.3 billion, and Savannah, which expects to pay over $700 million to deepen its shipping channel. Other ports are raising bridges to accommodate the mega-ships. The Port Authority of New York & New Jersey spent $1.3 billion to raise the Bayonne Bridge in New Jersey and $1.6 billion on a dredging project for improved access to Port Newark and Port Elizabeth in New Jersey and a Staten Island, N.Y., terminal.

Larger ships docking in U.S. ports is one of the five trends JLL cited in its report along with Gulf Coast ports seeing the most port volumes and increased industrial real estate demand; mergers and alliances that are changing the landscape of the shipping industry; next-day deliveries and autonomous vehicles that are affecting the trucking industry and the need for the rail industry to diversify and become more nimble.

“U.S. ports have been upgrading navigation channels and waterside infrastructure to service today’s vessels. However, inland road and rail infrastructure capacity has not increased in tandem, resulting in congestion. This may not be improved any time soon. Therefore, it makes sense to conduct more logistics operations closer to ports,” Kemmsies said in the report.

JLL research shows that, as vacancy rates in all port gateways are near historically low levels, current market conditions are more favorable to the landlords. Tight real estate markets, especially in the West Coast ports of Los Angeles, Long Beach, Calif., and Seattle-Tacoma in Washington, have led to the higher rents for warehouse and distribution spaces with some near $10 per square foot, triple net.

“So far in 2017, all port markets across the  U.S. have seen robust growth and increasing demand for industrial real estate,” Mark Levy, executive managing director and leader of JLL’s PAGI group, said in a prepared statement. “West Coast ports such as Los Angeles, Long Beach and Seattle-Tacoma continue to have the highest occupancy rates of all the port markets. In turn, they command the highest rents for warehouse and distribution space in the U.S., but other markets are gaining momentum. Over the last two years, East Coast ports including New York/New Jersey and Jacksonville have seen the largest decline in vacancy rates.”