CBRE brokered the deal on behalf of both parties. 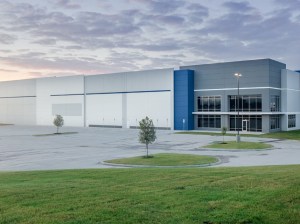 Logistics Property Co. has signed Nike as a tenant at Southport Logistics Park in Wilmer, Texas, according to The Dallas Morning News. The retailer will occupy the entire 1,038,618-square-foot Building 3, a warehouse that can be expanded to 1,233,515 million square feet. CBRE brokered the transaction.

With this deal, Logistics Property Co. inked the third full-building lease at its 252-acre logistics campus, bringing the occupied space to more than 2.5 million square feet. The previous deals involved a 400,000-square-foot cross-docked facility, leased to a subsidiary of Amazon, and a 1.1-million-square-foot cross-docked facility leased to CJ Logistics, according to CommercialEdge data.

The developer also intends to construct a fourth warehouse within the Wilmer business park, a 620,000-square-foot built-to-suit facility. At full build-out, Southport Logistics Park will encompass more than 3.7 million square feet of Class A industrial space.

Carrying the address 1300 Fulghum Road, Southport Logistics Park is just east of Interstate 45 and 5 miles south of Interstate 20, across the Union Pacific Dallas Intermodal terminal and American Intermodal Transport. The immediate area is home to numerous other industrial facilities including Schneider National Operating Center, Amazon DAL9 and Medline Industries, among others.

READ ALSO: Trends That Will Shape Industrial Real Estate in 2023

According to a Dallas-Fort Worth market research conducted by CBRE, occupiers took up over 9.6 million square feet of industrial space in the metro during the fourth quarter of 2022, bringing the total for the year to 36.4 million square feet. The same source reveals that, last year, leases signed by manufacturing-related tenants made up 21.7 percent of all leases, which accounted for nearly 10 million square feet.

In one of the most prominent deals, Samsung signed a 670,941-square-foot lease at a two-building, 1.3 million-square-foot cross-dock industrial campus in Fort Worth, Texas. Still under development, the logistics hub is expected to be completed in early 2023.