Irgang Group, the new owner of Union Lake Crossing in Millville, signed the family entertainment retailer to a 35,500-square-foot lease. 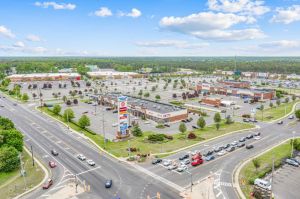 Fun City will set up shop with trampoline courts, a zipline, an arcade and other entertainment offerings in the majority of the anchor space that had been home to Dick’s Sporting Goods, which relocated its store to a mall in neighboring Vineland in 2016. The family entertainment center will count a recently expanded ShopRite supermarket as well as Kohl’s, Ross Dress For Less, Staples and PetSmart, among its co-anchors.

Irgang relied on a team led by Joseph Dougherty of Metro Commercial for representation in the lease transaction with Fun City. Don Mace of Keypoint Partners stood in for the tenant.

Magnet for more than fun

Originally developed in 2006, Union Lake boasts a key location along Cumberland County’s primary retail corridor. The shopping center has been part of Irgang’s portfolio since November 2021, when, as part of its expansion into the retail sector, the real estate investment and management firm acquired the approximately 43-acre asset from Goodman Properties in a transaction valued at $56.5 million.

Retail real estate in the Millville-Vineland area is faring well, having recorded a 6.1 percent vacancy rate in the third quarter of 2022, according to a report by Lee & Associates. And the positive conditions extend beyond the submarket. “The state of South Jersey retail real estate could best be described as vibrant,” Brunelli said. However, as is the case with the U.S. retail real estate sector in general, retail in southern New Jersey has had to make some adjustments in the post-pandemic climate.

“While actively working with national and mom & pop retailers, we’ve also had to think more outside the box when leasing big box spaces,” Brunelli added. “As in other markets, it’s not uncommon to backfill big boxes with uses such as recreation, entertainment, health care, self-storage and even, warehouse/industrial.”

Fun City is on track to open at Union Lake in mid-2023, marking the months-old entertainment retailer’s second location in New Jersey.