Net Lease Retail Cap Rates Flat in Q4, Up for the Year

Cap rates in the single tenant net lease retail sector were flat in the fourth quarter of 2018 compared to the previous quarter, but 95 percent of active net lease participants expect cap rates to rise in 2019. Nearly half predict cap rates will increase between 25 and 49 basis points by the end of the year, according to a new report by The Boulder Group.

“As the Federal Reserve continues to implement its monetary policy, there is investor expectation that cap rates should trend upward in 2019,” Randy Blankstein, president & founder of The Boulder Group, said in a prepared statement. “Investors will carefully monitor the capital markets and the effect on pricing as more rate hikes are expected from the Federal Reserve in 2019.” 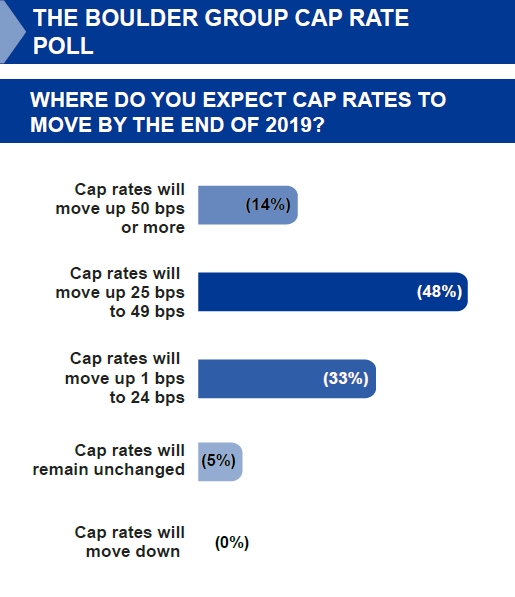 “We were not surprised by the results of the poll,” Blankstein told Commercial Property Executive. “Those in the industry have been expecting some cap rate expansion.”

“Sellers are still in the process of positioning their non-core holdings,” Blankstein told CPE. “Additionally, as we are in the late stages of the current real estate cycle, some property owners who are approaching the end of their investment hold period are bringing properties to the market to take advantage of the historically low cap rate environment.”

“Ahead of these increases in the supply of net lease properties for sale, the net lease market strongly favored sellers in recent years,” Blankstein added. “However, the market has shifted into more of a neutral position.”

“Investors who are willing to take on the risk of shorter term leases have been able to take advantage of this shift,” Blankstein noted. “Properties with short-term leases and without investment grade tenants or strong residual real estate had the greatest change in cap rates in the current rising rate environment.”

The Boulder Group, a Chicago-based investment real estate services firm specializing in transaction and advisory services for single tenant net lease properties, expects investor demand for net lease assets to remain active in 2019. The recent volatility in the stock market and other alternative investments helps net lease assets, which are perceived as safe and secure investment options. They are still commanding historically low cap rates, the report noted, with new properties that have strong credit tenants considered the most attractive in the net lease environment.

The firm recently sold a portfolio of two BioLife Plasma properties for $16.3 million in the fourth quarter—6830 Village View Drive in West Des Moines, Iowa, which sold for approximately $8.6 million and 540 Pleasant Grove Road in Mount Juliet, Tenn., which sold for about $7.6 million. The properties are reflective of some of the desirable traits that attract net lease investors—long-term leases, rent escalations and no landlord responsibilities for maintenance and operations.

Blankstein also told CPE that private and 1031 buyers made up more than 70 percent of the net lease retail sales across all price points in the fourth quarter.

Images courtesy of The Boulder Group