In the largest single-asset office lease in New York City since 2008, Morgan Stanley has signed a lease for 1.2 million square feet of space at One New York Plaza with Brookfield Office Properties. 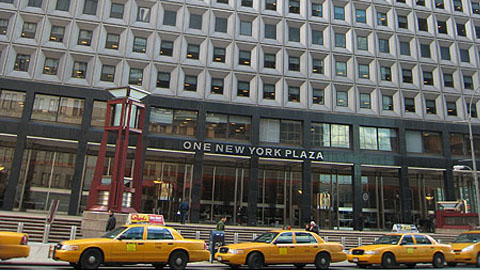 “Re-letting this large block of space at One New York Plaza was a major strategic priority for Brookfield and we are thrilled that Morgan Stanley will remain in the building and be taking additional space,” said Jerry Larkin, senior vice president and direct of leasing of U.S. commercial operations at Brookfield. “This lease commitment is another example of the appeal and long-term visibility of Lower Manhattan as a coveted market in which to do business.”

Morgan Stanley was represented in the lease negotiations by Barry Gosin, Brian Waterman and Romel Canete of Newmark Knight Frank. Larkin and Duncan McCuaig were the in-house representatives for Brookfield.

The 2.6-million-square-foot Class A building is located at the southern tip of Manhattan at Water and Whitehall streets, adjacent to Battery Park. It opened in 1970 and was renovated in 1995. Morgan Stanley, the financial services giant, first sublet at the tower in 2005, when it took space formerly occupied by Wachovia, which was later acquired by Wells Fargo.

Last year was a strong year for office leasing in New York City, particularly in downtown Manhattan. While several CRE services firms have projected a weaker year for 2012, the Morgan Stanley deal continues high-profile leasing activity that began in 2011. The Cushman & Wakefield Marketbeat Office Snapshot fourth-quarter report for Manhattan noted that the downtown market has seen “the strongest leasing volume in more than a decade.” It also noted that average Class A rents had risen 3.9 percent to $44.92 per square foot. The downtown vacancy rate closed 2011 at 9.5 percent, according to the Cushman & Wakefield report.

Brookfield also had several lease deals in late 2011 at downtown Manhattan properties. In its fourth-quarter earnings report to the U.S. Securities and Exchange Commission, Brookfield noted Bank of America/Merrill Lynch had renewed a 767,000-square-foot lease at the World Financial Center and Getco L.L.C., an electronic market-maker, had taken a new lease of 45.000 square feet at One Liberty Plaza. Unfortunately for Brookfield, Bank of America is also giving up 3 million square feet at the World Financial Center. In other bad news for Brookfield, Goldman Sachs is no longer leasing 590,000 square feet at One New York Plaza.

Despite those leasing setbacks, the REIT, which owns, develops and manages office properties in the U.S., Canada and Australia, stated that the fourth quarter of 2011 saw the “the highest volume ever for the company, surpassing 2007’s record output by 22 percent,” according to the SEC filing in February. Brookfield said its portfolio occupancy rate was 93.2 percent at the end of the fourth quarter.