After a two-year search, the hotel chain has finally found a new home with the help of JLL. The campus—developed by Bernstein and Boston Properties—will be located in downtown Bethesda, Md. 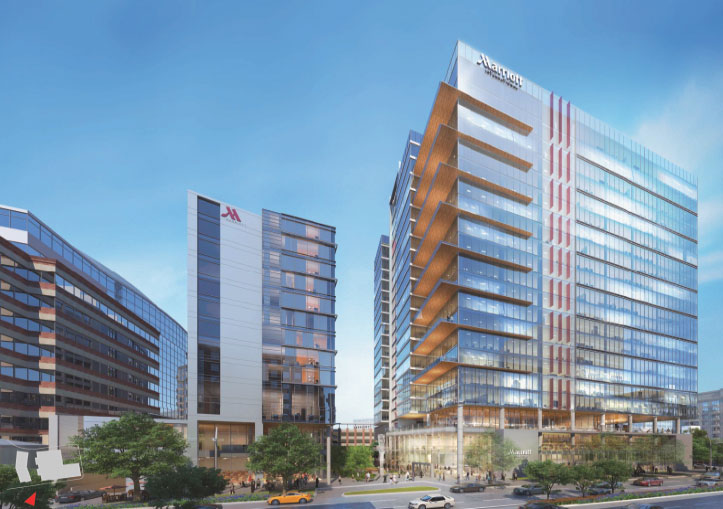 By 2022, Marriott International will have a new $600 million urban campus headquarters and flagship hotel at 7750 Wisconsin Ave., in downtown Bethesda on a site developed by The Bernstein Cos. and Boston Properties.

The hotel giant announced two years ago it was looking to move from its 10400 Fernwood Road campus in suburban Bethesda, where it had been since 1978, to a more urban and transit-friendly location. The new site is a short walk to the Bethesda Metro station. JLL worked with Marriott on the search and six months ago Marriott signed a letter of intent with the Bernstein and Boston Properties joint venture to develop its global headquarters on the site at the corner of Wisconsin and Norfolk avenues.

This week, JLL confirmed the leases have been signed for both the office and hotel space. The project includes a 22-story, build-to-suit office space and a 230-key flagship hotel to be owned by Bernstein and managed by Marriott International. JLL said it is the largest private sector lease transaction in suburban Maryland since 2000.

The Marriott office headquarters will have state-of-the-art technology, modern amenities, abundant light, flexible and collaborative work spaces and access to multiple transportation options, including the nearby Bethesda Metro station. A childcare facility, fitness center and cafeteria will be part of the office property.

The Marriott hotel will feature over 8,000 square feet of flexible meeting and ballroom space and a variety of dining and social amenities, including a ground-floor restaurant with outdoor dining, a specialty coffee shop and a seasonal rooftop dining terrace. A landscaped public plaza between the hotel and office buildings will offer a pedestrian walkway between Wisconsin and Woodmont avenues. Over 800 on-site, underground parking spaces for the hotel and office building will be developed and Marriott also plans to lease the Woodmont Corner Garage from Montgomery County for exclusive use by Marriott associates and visitors during business hours.

“This is a massive win for all stakeholders involved – Marriott will get a state-of-the-art workspace for their 3,500 associates with access to the bustling, urban Bethesda environment, the new development will generate $2.3 billion annually, in addition to countless jobs created by the construction of the project and ongoing management of the building and hotel, and Montgomery County gets to keep one of its most historic companies,” stated the JLL team.

“Montgomery County has been Marriott International’s home for more than 60 years, and we take great pride in the strong relationships we’ve developed and the contributions we have made as a committed community partner,” she said in a prepared statement.

Marriott is the largest hotel company in the world following its September 2016 $13 billion merger with Starwood Hotels and Resorts. It has a portfolio of more than 6,100 properties in 30 brands spanning 124 countries and territories.