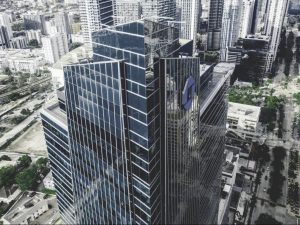 Bilzin Sumberg has renewed its lease of 84,000 square feet at Miami’s 1450 Brickell. The law firm’s initial commitment dates back to 2009, when the 650,000-square-foot office building was nearing completion. The renewal marks one of the largest law firm leases completed in Miami this year. JLL represented the tenant, while Blanca Commercial Real Estate negotiated on behalf of owner EPSA of America Corp., according to CommercialEdge data.

Completed in 2010, the 35-story high-rise is Miami’s first LEED Gold-certified property. The tower features floorplates ranging from 14,767 to 26,103 square feet, 12 passenger elevators and 13,873 square feet of retail space, as well as large-missile impact glass on the entire 508 feet of the building’s exterior. Tenant amenities include conference rooms, a fitness center and an outdoor terrace. The tenant roster includes J.P. Morgan, Google, GenTrust, Sirius America and JLL, among others.

Located at 1450 Brickell Ave. in Miami’s Financial District, just one mile from the city center, the property is within walking distance of Metrorail, Metromover and Trolley stops. The location is close to numerous retail options, restaurants, cafés and hotels.

A migration trend to the Magic City

Miami’s office market, particularly the Financial District, has benefited a lot from business migration trends that manifested themselves in recent years. One of the biggest changes the city has been experiencing is Miami’s emergence as a technology hub.

Office leasing activity has also improved in the metro, according to a recent CommercialEdge report. Miami’s vacancy rate clocked in at 8.6 percent as of August, showing a 490-basis-point betterment year-over-year.

In late August, two Chicago-based law firms signed leases at 830 Brickell, an office development set for completion later this year. Just a month before, another law firm relocated to Miami and signed a 60,000-square-foot lease at the same 55-story skyscraper.