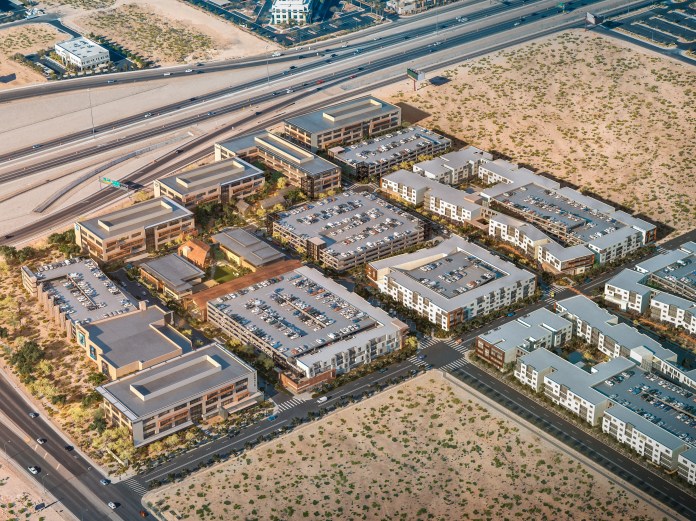 Matter Real Estate Group has secured a $150 million construction loan from Mosaic Real Estate Investors for the first phase of its $400 million mixed-use development in southwest Las Vegas and expects to break ground in spring. When completed, UnCommons will have about 500,000 square feet of office space, nearly 100,000 square of retail space and 800 apartments at the southeast corner of Durango Drive and the 215 Beltway.

The first phase, expected to be delivered by fall 2021, will have nearly 200,000 square feet of office space, a variety of new eateries and a food hall. Lifestyle and entertainment uses will include fitness studios, a luxury movie theater and 382 apartments with approximately 1,200 parking spaces located in two onsite parking structures. Other features on the 40-acre site will include a pedestrian trail, multi-purpose conference center and inspirational art. The project is being designed by Gensler.

“We are in negotiations with numerous tenants in both the office and food and beverage space and expect to be making announcements in quarter four of this year,” Matter Real Estate Partner Jim Stuart told Commercial Property Executive. CBRE is handling the office leasing and RKF, a Newmark company, is the retail leasing broker.

Stuart noted that when Gov. Steve Sisolak was serving as chair of the Clark County Commission, prior to becoming governor, he designated UnCommons as a high-impact project, a recognition reserved for projects that will create economic diversification for the state. Other similar projects include the $2 billion Allegiant Stadium⁠—which will be the new home of the Las Vegas Raiders and UNLV football teams when it opens in August 2020⁠—and the $1 billion MSG Sphere at the Venetian, a music and entertainment venue that is set for completion in 2021.

Phase two of the project is anticipated to be completed approximately 12 to 18 months after the first phase is done, Stuart added. A start date for the second phase of development has not been set. UnCommons is expected to house 3,000 employees and more than 2,000 residents.

Since forming in early 2018, Matter Real Estate has emerged as a leading developer with more than 1.5 million square feet of commercial and industrial projects underway, including several in Las Vegas totaling about $500 million in value. In August, Matter began construction of a $70 million master-planned industrial property located a few miles away from the Las Vegas Strip that will have five buildings ranging from 11,000 to 478,000 square feet. Known as Matter Logistics Center @ West Cheyenne, it is being built on a site of more than 41 acres and is slated for completion in February 2020.

A Success Story That Will Inspire You