PCCP provided the note for the historic building, which was once the city's tallest. 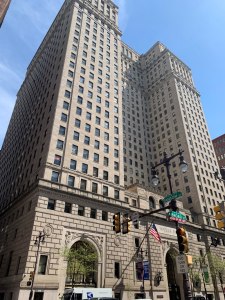 According to John Randall, partner with PCCP, the loan will refinance the existing debt and will also serve a $4.1 million capital improvement plan. The renovation efforts will boost the property’s amenity package, with the addition of a rooftop deck, fitness center and shared conference space. JLL’s Ryan Ade and Jim Cadranell arranged the transaction.

Once the tallest building in the city and the ninth-largest in the world, 123 South Broad St. was constructed in 1928 in Center City, three blocks south of City Hall.

The Wells Fargo building currently offers a three-story lobby, ground-floor bike room and concierge service. Since the onset of the global health crisis, the property gained nine new tenants occupying a combined 60,000 square feet. At the time of the refinancing, the building’s roster included 92 tenants.

Despite the office market’s pandemic-induced uncertainties, PCCP has been vigorously recapitalizing properties across the country, including five loans within New York City. Earlier in August, the finance and investment management firm provided a $148 million loan for the recently renovated, 387,300-square-foot 1410 Broadway tower in Midtown Manhattan.