Jordan’s future tallest residential tower is well on its way to completion, with developer DAMAC Properties announcing the topping out of the 36-story The Heights. 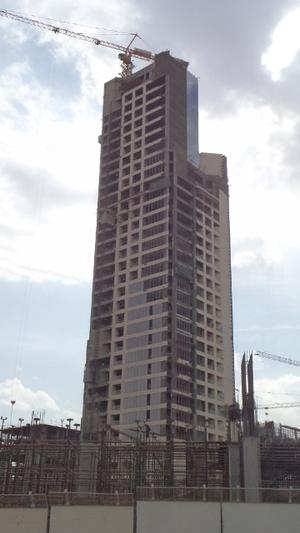 Jordan’s future tallest residential tower is well on its way to completion, with developer DAMAC Properties announcing the topping out of the 36-story The Heights.

Located in Amman’s new downtown district of Al Abddali, The Heights is 36-story luxury tower, set to be the highest residential property upon its completion, scheduled for the second quarter of 2013. Not only is The Heights located in the booming Al Abdali district, it’s also situated next to a civic plaza, at the center of a massive, 1 million-square-foot (10,700,000-square-foot) mixed-use development.

The Heights’ community amenities will include a temperature-controlled outdoor swimming pool, a sauna, jacuzzi, a state-of-the art gym, multilevel underground parking with elevator access, 24-hour concierge and help desk, a standby power generator and a garden court facing the property.  The ground floor and mezzanine level will be taken up by high-end boutiques and designer outlets, specialty restaurants, as well as a café and juice bar. The building will feature contemporary architecture.

The Heights will feature one-, two- and three-bedroom apartments, as well as studios and penthouses. All units will feature open-air balconies, floor-to-ceiling double glazed windows and granite countertops among other amenities.

According to Niall McLoughlin, DAMAC Properties’ senior VP, the property has only a few unclaimed units left, which are expected to be picked up by the end of 2012. “We have experienced very strong interest from Jordanian’s, both in Amman and working abroad, as well as the international market,” McLoughlin said. “This project is the most sought after address in Amman.”

The Heights is also Jordan’s first residential high-rise. DAMAC Properties is developing two more residential projects alongside The Heights. The Lofts has passed its sixth floor and The Courtyard is past the fifth. Though smaller than The Heights, both projects will offer luxurious living spaces and amenities such as a rooftop garden.